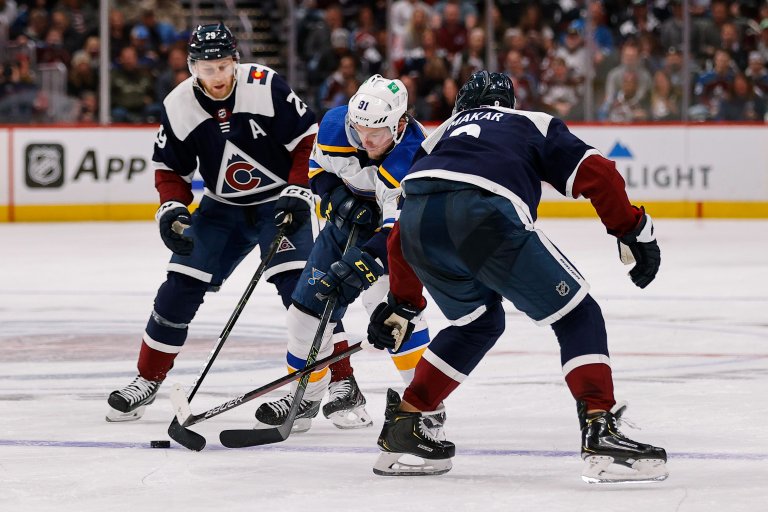 The Colorado Avalanche are -400 favorites over the St Louis Blues in their Stanley Cup NHL Western Conference second-round playoff series
Last season, the Avs swept St Louis in the opening playoff round
All of the Avalance vs Blues odds, picks, predictions and best bets are looked at in the story below

The last time the Colorado Avalanche and St Louis Blues clashed in the Stanley Cup playoffs, it was over in the blink of an eye. In last season’s opening postseason round, Colorado whipped St Louis in the minimum four games.

Will it be any different this time around? The optics are suggesting no.

St Louis is injury-riddled on the back end. While the Blues were forced to rally from a 2-1 deficit to win their first-round series with the Minnesota Wild in six games, the Avs cruised past the Nashville Predators in a four-game sweep,

Oddsmakers are siding strongly with the Colorado Avalanche. They are solid -400 favorites to eliminated the St  Louis Blues. The Avs are 14-4 straight up in their last 18 games against the Blues. They’re 9-9 on the puckline over that same 18-game stretch.

Odds as of May 13th at Caesars Sportsbook.

At a betting line of -400, the Avalanche are given an 80% implied probability in this series. Colorado has won both previous series with St Louis and neither was closely fought. The Avalanche have won eight of nine playoff games over the Blues. Colorado is 6-3 on the puckline over that span.

St Louis is 0-5 straight up at Colorado in postseason action. During last season’s first-round series, the Avs outscored the Blues 20-7. Colorado covered in all four games.

Overall, the Blues are 2-9 SU and 5-6 on the puckline in their last 11 vists to play the Avs at Ball Arena. However, this season, though the Avalanche won two of three games from the Blues, St Louis posted its lone victory at Colorado.

During the series against the Wild, the Blues lost defensemen Nick Leddy, Robert Bortuzzo and Torey Krug to injury. All but Krug (lower-body) have since returned to action.

Adjusting to the defensive shortcomings, Blues coach Craig Berube opted to suit up seven defensemen on game nights. That gave him the safety valve of knowing if one of his ailing defenders broke down, he’d still have six defenseman at his disposal. He also was leaning heavily on veteran reargaurd Colton Parayko. Parayko played 30:37 in Game 4 against the Wild.

Watch all the highlights from the Blues’ 5-1 win over Minnesota, presented by @budlight. #stlblues pic.twitter.com/xOHpSwdbZr

Berube moved Brayden Schenn to Ryan O’Reilly’s wing and the duo seemed to click. O’Reilly, and forwards David Perron and Vladimir Tarasenko each scored five goals in six games against the Wild. St Louis will need that continued balance in scoring to keep pace with the high-powered Colorado offense.

Another major change saw the Blues go back to 2019 Stanley Cup hero Jordan Binnington in goal. Ville Husso started the first three games of the series with Minnesota. In his three starts, Binnington went 3-0, allowing only five goals.

The only injury concern for the Avalanche appears to be clearing up. Darcy Kuemper’s scary eye injury in Game 3 against the Predators wasn’t nearly as bad as it originally looked. He’ll be in goal for Game 1 against St Louis.

Colorado Avalanche Too Much For St Louis Blues

Inthe NHL playoff bracket, St Louis is out of the first round for the first time since winning the Stanley Cup in 2019. But the Blues have bitten off more than they can chew in Colorado.

The Avs are in the second round for the fourth successive season. Colorado is the -115 betting choice in the Western Conference odds and the +220 chalk in the Stanley Cup odds.

Colorado is simply too deep and too talented to be stopped by the Blues. They probably won’t be sweeping the Blues again but the Avalanche shouldn’t need more than five games, six at the most to move on to the conference final round.