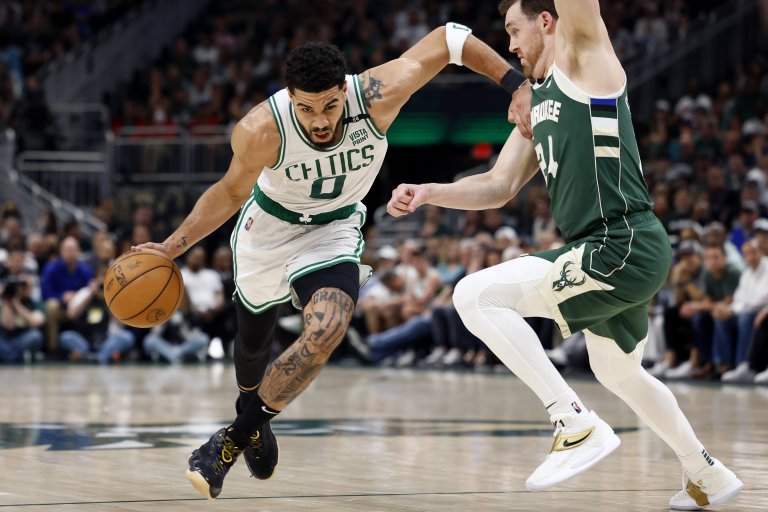 May 13, 2022; Milwaukee, Wisconsin, USA; Boston Celtics forward Jayson Tatum (0) drives for the basket against Milwaukee Bucks guard Pat Connaughton (24) during the third quarter during game six of the second round for the 2022 NBA playoffs at Fiserv Forum. Mandatory Credit: Jeff Hanisch-USA TODAY Sports

The Celtics beat the Bucks in Game 6 on Friday night, setting up Game 7 on Sunday
Boston is a 5-point favorite for the final game of this series at TD Garden
Should you ride the C’s or Bucks in the opening odds? Find the preview and best bet below

With their backs up against the wall, the Boston Celtics marched into Fiserv Forum and evened up their series with the Milwaukee Bucks at three games apiece on Friday night.

Jayson Tatum dropped a mind-boggling 46 points in the victory, putting the C’s in a very good position heading back to TD Garden on Sunday for the series decider.

Odds as of May 13th at FanDuel.

The C’s have opened up as a 5-point favorite, but there is a good chance this slims down to around three or four points by the time tip-off arrives. Boston is 3-2 on home court in these playoffs thus far.

This was truly a breathtaking performance from Tatum, who put Boston on his back and carried them to the finish line. He shot 17-for -32 from the field and scored 21 of his 46 points from downtown, going 7-for-15.

The Celtics superstar hit numerous clutch shots and scored 11 straight points for his squad in the fourth quarter.

He did have a solid amount of help though, with Marcus Smart and Jaylen Brown combining for 43 points. The C’s shot the ball very well from downtown, draining 40% of their triples, and even staved off a late run from the Bucks in the final period, thanks to the likes of Tatum and Brown. Heading back home, they will be very confident.

If you thought Tatum showed out, take a look at Giannis Antetokounmpo’s statline. The Greek Freak erupted for 44 points and 20 rebounds, becoming the first player since Shaq in 2001 to put up 40 points and 20 boards in a single game.

Giannis couldn’t have done any more in this contest, but the rest of the rotation failed to show up. Jrue Holiday was the only other starter in double figures, and he didn’t even put up an efficient performance, shooting 7-for-17 from the field for 17 points.

He joins Shaq and Wilt as the only players ever with a 40/20/5 playoff game. pic.twitter.com/bbE3gwOFPj

It’s clear Antetokounmpo needs the supporting cast to step up. The Bucks also shot a putrid 24% from three-point land. That’s typically a huge part of their success and if Milwaukee doesn’t get it going from deep, Game 7 will be a very tall task.

Giannis is playing his heart out, but he can’t do it all alone. Mike Budenholzer’s squad must find a way to contain Tatum too, who is feeling it lately.

Honestly, I like Bucks +5 here. The lines will probably move by the time Sunday rolls around as I mentioned above, so jumping on that is a good idea right now.

This could very well be a one-possession game given the circumstances and honestly, this could go either way. You can’t count out a championship team like Milwaukee, but if Tatum plays as he did in Game 6, they have a legitimate chance at advancing as well.