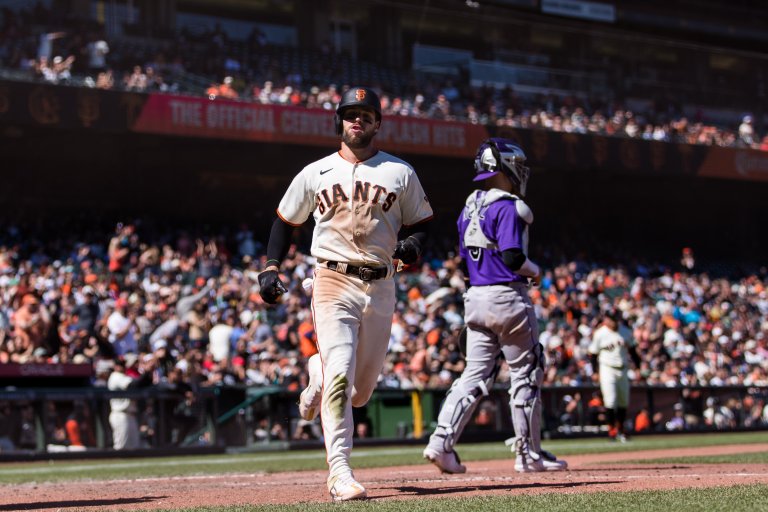 Two of the NL’s top-six teams square off in St. Louis on Saturday for the second game of a three-game set. The Cardinals were sizeable home ‘dogs on Friday night to the Giants, but the tables have turned for Saturday’s contest.

St. Louis opened as -115 moneyline favorites, in a contest that features a total of 8.0 runs. First pitch is scheduled for 2:10pm ET at Busch Stadium in St. Louis, MO, with 82 degree temperatures and a risk of thunderstorms in the forecast.

The Giants, a top-10 contender in the World Series odds, will give the ball to right-hander Jakob Junis. The 29-year-old will make his second start of the season, after beginning the year in the bullpen.

Last time out, he yielded just three hits and two runs to these same Cardinals, in a 4-3 victory. He’s posted a 1.20 ERA and 0.87 WHIP thus far, which is a far cry from his career averages.

Prior to this season, Junis had recorded three consecutive campaigns with an ERA over 5.20 and a WHIP of at least 1.40. He’s managed to slash his HR/9 rate from 1.6 in 2021 and 2.49 in 2020 to a measly 0.6 this season, while drastically reducing the success of enemy hitters on balls in play.

His BABIP has gone down from .333 to .250 this season, while his hard hit rate allowed has fallen by over 15%. Either Junis has all of a sudden turned into a Cy Young odds contender, or this current level of excellence is not sustainable.

The Cardinals meanwhile, will counter with Dakota Hudson. The 27-year-old is fresh off  a losing performance against these Giants, in which he allowed five hits and three runs over 4.2 innings.

That start marked the fifth-straight outing in which Hudson has struggled with his control. He allowed four walks for the second time in four starts, and has now issued more base on balls (15) than strikeouts (14) over that span.

Entering play on Friday, the Giants had outscored their opposition 41-18 over the previous five games. Their offense is among the best in baseball, while their pitching has been nearly as sharp. It’s no wonder they’re on pace to smash their victory projection in the MLB win totals.

Only the mighty Dodgers average more runs per game than San Fran, while the Giants also rank top-10 in home runs, batting average, and OPS. There’s no generational talent on their roster, just solid contributors up and down their lineup.

As a staff, they rank top-10 in ERA, while leading MLB in fewest home runs allowed and FIP.

St. Louis on the other hand, entered play on Friday performing very inconsistently at the plate despite featuring a loaded lineup. They’ve scored at least seven runs in four of their past eight games, but in the other four they’re averaging less than three runs (2.75).

The Cardinals pitching on the other hand has been rock solid. They’ve allowed the fourth fewest runs in baseball, limiting enemy hitters to three runs or fewer in six of their past 10 games.

Count me among those who believe Junis’ bubble is going to burst. His season-long numbers defy everything he’s been for the first five years of his career, and unless he really has morphed into an elite pitcher all of a sudden, then negative regression is coming his way.

The problem is, it’s hard to feel confident backing Hudson on the other side. His control problems are an issue and this Giants lineup is not one you want to surrender too many free passes against.

As a result, let’s target over 4.5 runs through the first 5 innings. That ensures the majority of the at-bats during that time frame will come against Junis and Hudson, which should yield plenty of scoring opportunities for both sides.