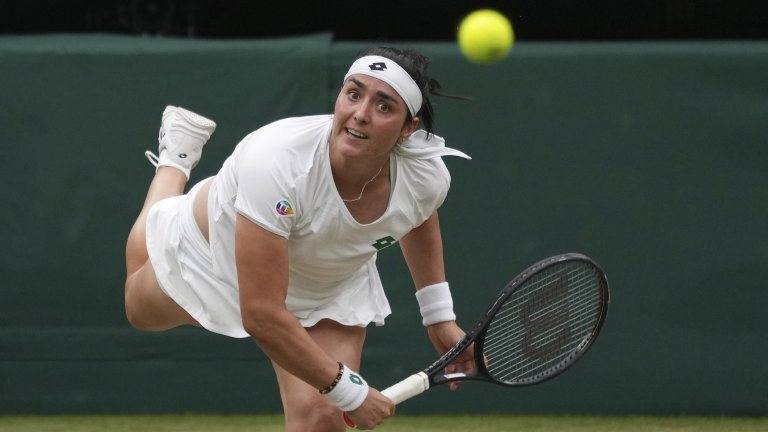 Madrid Open champion Ons Jabeur looks to build on that in the Italian Open semifinals
The 27-year-old Tunisian’s match against unseeded Daria Kasatkina goes May 14 at 11 a.m. ET
See the Jabeur vs Kasatkina odds, with the Russian looking for an upset

Ons Jabeur has won 10 straight matches. And she is 16-2 in four tournaments on clay this spring.

Odds as of May 13 at Barstool Sportsbook

Now that Canadaian online sports betting is legal, bettors have several online sportsbooks to choose from to bet on this match, which has the moneyline at -278 for Jabeur.

Where has world No. 4 Maria Sakkari gone?

The 26-year-old from Greece has been an absolute ghost for much of 2022. But she she was up 6-1, 5-2 against Jabeur in their quarterfinal on Friday, she seemed poised to continue a deep run just in time to give herself some momentum for the French Open.

Forty-one minutes after this Tweet, Sakkari finally wins another game.

Jabeur should win this from here. https://t.co/cyzWcTsYKq

Jabeur won 11 of the next 12 games, and the match, and finds herself in the Italian Open semifinals when she probably thought she’d be on a plane on Saturday.

She didn’t play well. Jabeur looked a little at the end of her rope after coming straight from the biggest win of her career in Madrid and winning four more matches in Rome.

At one point, you could get +10000 on her staging a highly unlikely comeback.

But she lives to play another day.

Kasatkina Both Lucky and Good

Kasatkina is one of a full handful of WTA players who, at one time, was a top-10  in the WTA world rankings.

Then, she just went underground.

Slowly but surely she is regaining some form. But no one would ever have  predicted she’d make the weekend at the Italian Open.

You had to scroll way, way down the list of outright odds before the tournament began. And even then, you might not have found her.

But she’s had a LOT of help.

Not the way anyone wanted the match to end 😔

Daria Kasatkina advances into the semifinals of the Internazionali BNL D’Italia for the first time in her career with a 6-4, 3-2, ret. victory over Jil Teichmann.

She defeated Leylah Fernandez in a third set tiebreak (after Fernandez beat No. 14 seed Anastasia Pavlychenkova). She took care of No. 2 seed Paula Badosa in a late-night match during a period the world No. 2 is really struggling to win a match.

And then, facing unseeded Jil Teichmann  (who upset both No. 6 seed Karolina Plisokva and the dangerous Ekaterina Rybakina) late night on Friday, she benefited from an injury retirement by the Swiss lefty.

Jabeur on Three-Match Streak vs Kasatkina

Earlier in their careers, when Kasatkina was much higher ranked and Jabeur was still working her way up, Kasatkina won a couple of major meetings between the two: at the Rio Olympics, and in Jabeur’s first WTA final in Moscow.

Both times, Jabeur was a tiebreak away from winning; but she couldn’t pull the trigger.

Since then, Jabeur has risen to the top 10 and has proven her mettle.

The two have met three times in the last year, on three different surfaces, and the Tunisian has won all three with the lost of just one total set.

That’s a big reason why she’s the favorite to win outright. Add to that that she’s really playing with house money, because she was halfway out of Rome in the Sakkari match.

But it’s the same for Kasatkina, who easily could have lost to Fernandez.

The Russian would appear to be by far the fresher of the two, and it’s a huge opportunity for her to get to a WTA 1000 final. It shapes up as a lengthy battle.