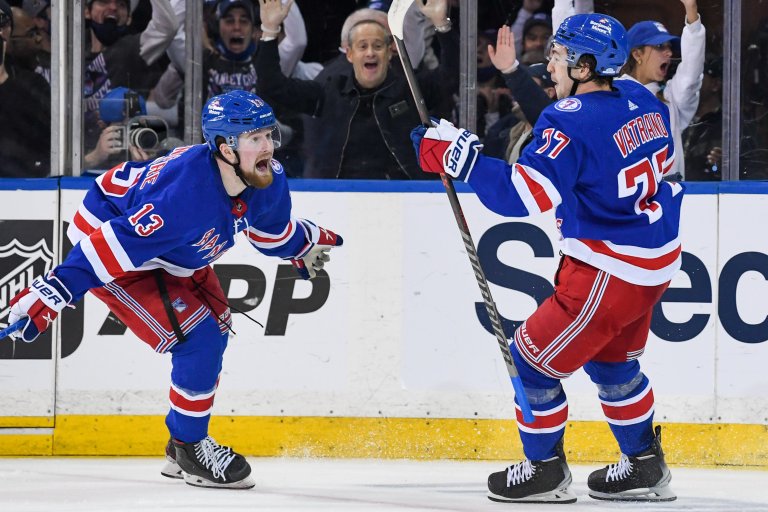 The New York Rangers are -160 home favorites to win Game 7 of their first-round series over the Pittsburgh Penguins on Sunday, May 15
Penguins center Sidney Crosby has an upper-body injury and his status for Game 7 is unknown. He did not play Game 6
See the Game  7 Penguins vs. Rangers odds below plus betting picks

The New York Rangers own home-ice advantage for Sunday’s Game 7 against the Pittsburgh Penguins. But statistics say home ice hasn’t been an advantage in Game 7 for at least a decade. Over the past 10 years, the home team has won only 50% of time (22-of-44).

But in this Game 7 the Rangers will likely play a Penguins team that is without future Hall of Famer  Sidney Crosby. And maybe more importantly, they will be facing a Penguins team with a No. 3 goalie starting in net.

That’s more than enough to explain why the Rangers are -160 favorites heading into the deciding game.

Odds as of May 5 at Caesars Sportsbook.

A little bit of much-needed optimism… the Penguins are 6-0 all-time on the road in Game 7. Some of the most memorable wins in team history. #NYRvsPIT

Sidney Crosby’s injury is officially listed as an upper body injury, but ESPN has reported that Crosby has a concussion.  That doesn’t inspire confidence in a return for Game 7, although no one has yet ruled him out. Without Crosby playing 20+ minutes, the Penguins’ offense is far less dangerous. The Penguins  have the puck far more when he’s on the ice.  In the first five games, the Penguins out-chanced the Rangers 58-18 in even-strength situations when Crosby was on the ice.

No. 1 goalie Tristan Jarry’s injury status is equally important to the Penguins.  No. 2 goalie Casey DeSmith is gone for the year. Replacement Louis Domingue’s warts are beginning to show.

Jarry has skated. But could the Rangers realistically throw him into a Game 7 without practice time?  It seems unlikely. He has not played since April 14.

So ummm in the series…

At 5on5, with Sidney Crosby on the ice:

Domingue’s Game 6 performance was his worst of the series. He gave up two soft goals, including  the game-winner. He simply failed to catch what should have been a routine shot. It was like a first baseman botching a good throw from the shortstop. He didn’t look confident in Game 6.

His save percentage has been below .900 in four his five starts in this series

Goaltending inconsistency and the injury question marks make this game a challenging pick. Both Shesterkin and Domingue have posted dreadful games in this series. Domingue was extra leaky in Game 6. It doesn’t help the bettor that Crosby’s and even Jarry’s playing status for Game 7 is unknown.  The Rangers and Shesterkin gained some confidence in the last two wins. But the payoff vs risk on a -160 Rangers moneyline bet isn’t enticing.

What we do know is that plenty of goals have been scored in this series.  No matter who is playing, it would seem like that trend will continue.