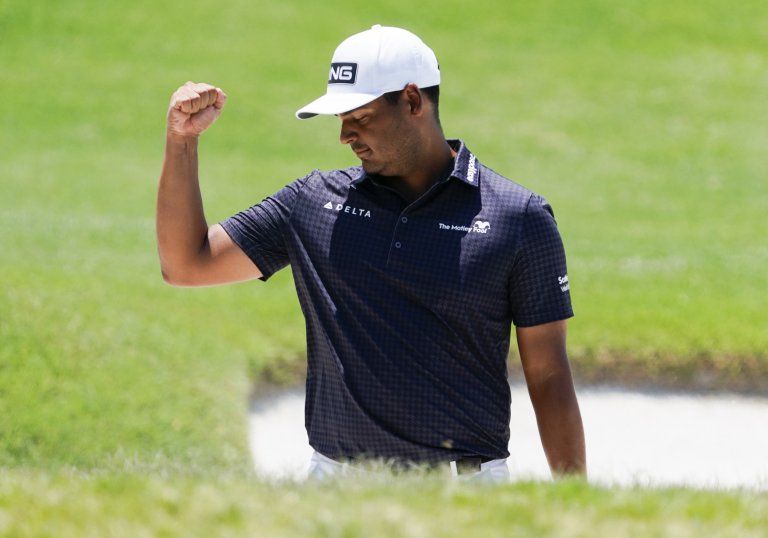 May 14, 2022; McKinney, Texas, USA; Sebastian Munoz reacts after making an eagle out of the bunker on the sixth hole during the third round of the AT&T Byron Nelson golf tournament. Mandatory Credit: Raymond Carlin III-USA TODAY Sports

In Thursday’s opening round, Sebastian Munoz fired a scintillating course record of 12-under-par, 60 to grab the first round lead. He’s followed up his strong play to maintain a slim one shot edge over Jordan Spieth through 54 holes. TPC at Craig Ranch is playing extremely easy this week, so a birdie fest can be expected for the final round on Sunday.

Read on to see the updated odds and best bets to make for the final round.

Odds as of May 14th at DraftKings

Wanting to place a wager on leader Sebastian Munoz (+260) and Jordan Spieth (+195), who is one stroke back, is difficult to stomach at such low odds. In particular Munoz, since he has just the lone PGA Tour victory. Joaquin Niemann, who won the Genesis Invitational earlier in the campaign (+450) has decent odds comparatively.

Niemann is tied for fourth in birdies and fifth in putting this week, where he’s picked up nearly six shots on the field. He has just two bogeys all week, and is 16th in birdie average for the season.

No shortage of star power and/or locals to root for in Sunday’s final four groups of @attbyronnelson, beginning at 11a local time:

Despite losing shots tee-to-green in two of the three rounds, the young Chilean superstar in the making still finds himself solidly in contention. For the year, he’s a top-25 player in that category, so it’s reasonable to think he’ll get that straightened out enough to be in the mix late Sunday on the back nine. His odds of +450 are decent given how close he is.

James Hahn (+2000): This has been back-to-back weeks James Hahn finds himself on the first page of the leaderboard entering the final round. He shot a blistering third round 11-under, 61, which was four better than the field. He’s three strokes adrift, in a tie for fourth. Hahn has been phenomenal tee-to-green through three days, gaining a whopping 13 shots over the field, tops in the tournament.
Scottie Scheffler (+2200): Native Texan Scottie Scheffler will have the crowd pulling for him on Sunday, and he could get right back into the thick of things as he’s just five shots off. He won four tournaments in a six-event span recently, so he can’t be counted out. For the week, he’s third in SG: approach, and tied for first in birdies, with at least seven each round, so he has the firepower to close the gap.