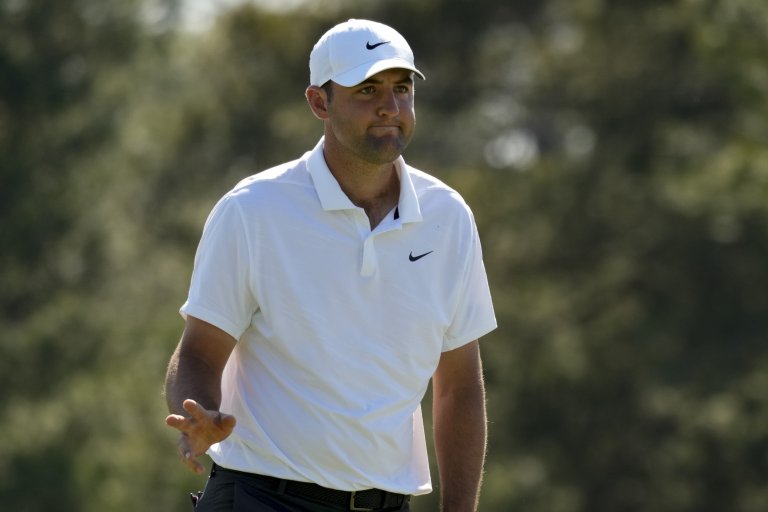 Scottie Scheffler waves after a birdie on the 17th hole during the first round at the Masters golf tournament on Thursday, April 7, 2022, in Augusta, Ga. (AP Photo/Charlie Riedel)

Augusta National played tough in the first round Thursday, with Sungjae Im posting the best score of 5-under, 67. He took the outright lead by one stroke over Cameron Smith, as both players were co-runners up in the 2020 iteration of the Masters. Before the tournament began, Smith was a top-five favorite to slip into the green jacket, while Im was not among the top contenders in the eyes of oddsmakers.

Odds as of April 7th at DraftKings Sportsbook.

The huge story after round one, however, was the exceptional play of Tiger Woods, teeing it up in a competitive event for the first time in 508 days. He put together a tidy 1-under, 71, which featured three birdies, two bogeys and thirteen pars. Most importantly, while it was obvious he was in minor discomfort, his leg and back held up for him to post a very solid score.

There were some big names shooting over-par numbers, such as Rory McIlroy and Collin Morikawa (+1), Jon Rahm and Jordan Spieth (+2), Brooks Koepka (+3), with Justin Thomas and Bryson DeChambeau struggling to 4-over, 76’s.

Tiger Woods in Contention After First Round

At this point, anything Tiger Woods does is nothing short of remarkable, as he played his first competitive round in over 500 days, yet he finds himself in contention following a solid 1-under, 71. That puts him in a tie for tenth heading into Friday, four strokes behind. As a point of reference, when he won his latest Masters in 2019, he was T-11th after the opening day, and was also four shots adrift.

The birdie moves Tiger back into red numbers. pic.twitter.com/qb6AvOXvVg

He looked limber throughout the day, only having a serious hiccup on the par-5, 8th, where he was pitching for eagle from 50 yards. He made a mess of the hole after that, leading to a dreadful bogey. He had some moments of brilliance as well, notably his near ace on the par-3, 6th, along with a few clutch par saves.

Tiger hit 9 of 18 greens and eight of 14 fairways in his return to action. Currently his odds to win outright are +4000, which are the exact same as they were pre-event. That’s definitely easy enough to stomach, should you want to roll with Woods to keep the good times rolling.

He plays in the afternoon Friday where it is expected to be cool and windy, which isn’t good for his body. As tempting as it is, the smart money is best placed elsewhere, which is what oddsmakers feel as well.

Scottie Scheffler (+700): It’s hard not to stick with the hot hand in Scottie Scheffler, who has won three of his last five tournaments to ascend to number one in the world. He sits at 3-under-par, just two back, with his lone bogey coming on the 18th hole. He’s also been really solid in majors prior to this season, putting together six straight top-20’s, with four top-10’s, including the last three.
Patrick Cantlay (+1100): Patrick Cantlay came on late Thursday, registering three birdies in the last six to record a 2-under, 70. He’s not far removed from winning four times last season, and also has four top-10’s in 2022, including a runner-up in Phoenix. He hit 15 greens and twelve fairways in round one on a course he nearly won at. When Tiger took the title in 2019, Cantlay had the lead with three holes to go in the final round, so he’s comfortable at this track.