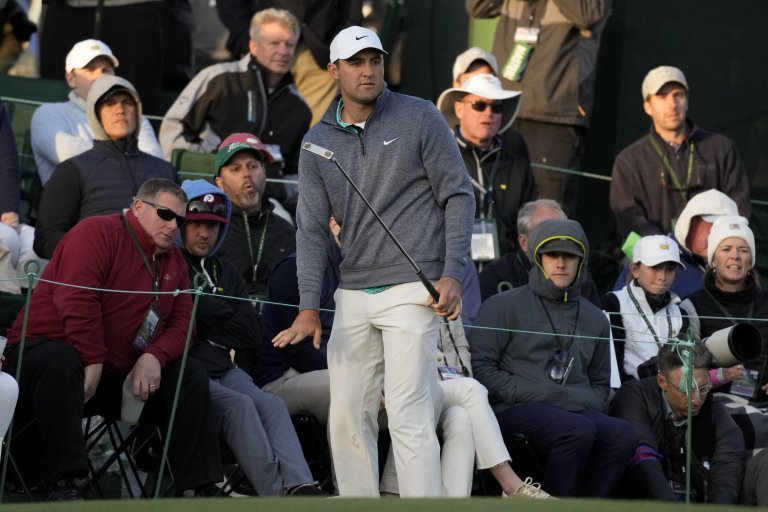 Scottie Scheffler watches his putt on the 18th green during the third round at the Masters golf tournament on Saturday, April 9, 2022, in Augusta, Ga. (AP Photo/Charlie Riedel)

Through 54 holes of the Masters, Scottie Scheffler has separated himself from most of his contenders, with just a handful of golfers realistically able to slip into the green jacket Sunday evening. Scheffler, who has won three of his last five events, is three clear of Players Champion Cameron Smith, and five ahead of third place Sungjae Im.

Before the tournament began, Scheffler was the third favorite to win his first major in the eyes of oddsmakers, slightly ahead of Smith. Read on to see the current odds and best bets entering the final day.

Odds as of April 9th at DraftKings Sportsbook.

Tiger Woods had a rough day on the greens, taking 36 putts and shooting a disappointing 6-over, 78 to fall out of contention. He’ll play with 2021 US Open champion Jon Rahm at 10:50am eastern time Sunday morning.

At times during the third round, it appeared Scottie Scheffler would potentially disappear from the field entirely, with a lot of his challengers fading. He put together a very solid 1-under, 71, with six birdies, five bogeys and 7 pars. He did drop four shots in the last seven holes (with two birdies) to give some hope to his pursuers.

On 18, his drive was pulled way left into the trees, leading to what initially appeared to be a disaster. He escaped with a bogey to take a three shot edge over Cameron Smith.

Scheffler has quickly ascended to number one in the world with three wins in five starts, so it’s hard to think that he’ll suddenly crumble on Sunday. There’s of course a chance he trips up and allows the field back into it, but that’s certainly a long shot. It’s not really fun going to the book and wagering on a player that is -225 to win outright, but with him being five ahead of third spot, not many challengers have a chance on a tough course.

For those who are hoping for a closer battle, just seven of twelve players with a three shot edge through 54 holes have gone on to win the green jacket. Many of those haven’t been as dominant as Scheffler has been the last two months, however.

Cameron Smith (+275): Even though Scheffler has been on fire of late, it’s not like Cameron Smith hasn’t also been fantastic. He has two wins in 2022, with the Sentry Tournament of Champions and in his last start at TPC Sawgrass. Smith has also been phenomenal in final rounds, ranking tied second in scoring on Sundays. Six of his seven final days have been in the 60’s, with the lone exception being a round of 70.
Shane Lowry (+6000): An argument could be made for Sungjae Im at +1400, but Shane Lowry at this number is intriguing. He’s already won a major (2019 Open Championship), and he’s T-6th in final round scoring on the campaign and fifth in scoring average. He will begin seven shots back, so he’ll have nothing to lose and can be super aggressive in what should be a slightly easier setup by Augusta National.