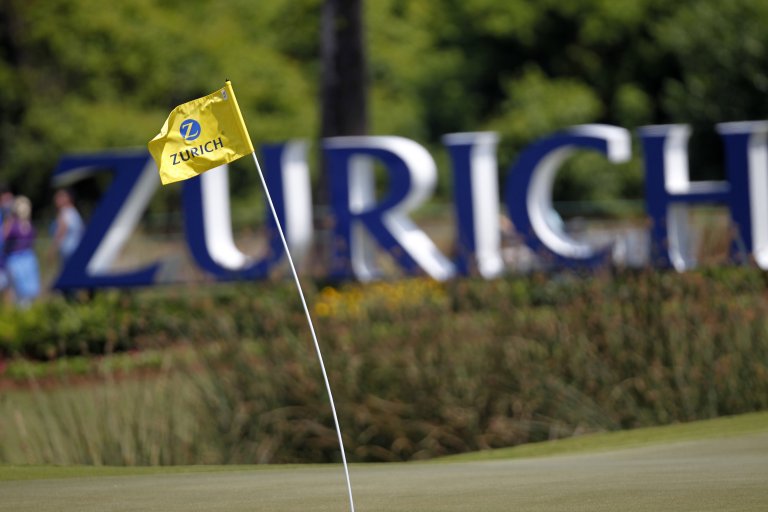 A flag at the 17th hole beds due to strong winds during the Pro-Am rounds of the PGA golf Zurich Classic at TPC Louisiana in Avondale, La., Wednesday, April 25, 2012. (AP Photo/Gerald Herbert)

The Zurich Classic of New Orleans from TPC Louisiana tees off Thursday, April 21st
80 teams of two golfers compete in four-ball and foursomes format with Collin Morikawa and Viktor Hovland favorites over Patrick Cantlay and Xander Schauffele
We’ve narrowed down the duos with the best chance of emerging victorious and provided the best value bets below

The PGA Tour mixes things up this week in Louisiana for the team competition at the Zurich Classic of New Orleans. 80 teams of two golfers will vie for the title playing two different formats. Last year, Aussies Cameron Smith and Marc Leishman edged the South African tandem of Louis Oosthuizen and Charl Schwartzel in a playoff.

For Thursday and Saturday rounds, it will be the four-ball (best ball) format with both golfers playing their own ball throughout the hole, and them selecting whoever did better for their score. On Friday and Sunday rounds, it’ll be foursomes (known more commonly as alternate shot), which is much more difficult to score well on.

The low 35 teams and ties after the second round will continue forward with the remaining duos missing the cut. Five of the top-ten players in the world rankings are competing in the only official team tournament on the schedule, including reigning Masters champion and best golfer on the planet Scottie Scheffler.

Odds as of April 18th at DraftKings.

When scouring the groupings looking for a winner, it’s hard to look past Cameron Smith, both for his current play, but also for his past history in this tournament. He paired with Jonas Blixt to win the first iteration in 2017, and then last year, both he and partner Marc Leishman defeated Louis Oosthuizen and Charl Schwartzel in a playoff.

Apart from an uncharacteristic missed cut at the RBC Heritage, Smith has been on fire in 2022. He won the Sentry Tournament of Champions with a record low score under par, took home the Players Championship at Sawgrass title then was T-3rd in the Masters.

His partner Leishman has been good-not-great, racking up eleven results of nothing worse than 38th in his last 13 tourneys. Given Smith’s prowess in this format, and their ability to win last year, getting them at odds better than the top three teams on the board presents decent value at +1000.

Joaquin Niemann/Mito Pereira (+2500): The Chilean two-man show of Joaquin Niemann and Mito Pereira ooze talent. The budding superstar Niemann won wire-to-wire a couple months ago at the Genesis Invitational for his second win. He’s been 35th or better in seven of the last eight times teeing it up. Pereira has been finding himself on the periphery of contention in the last year, and has been 30th or better in five of his last six events.
Keegan Bradley/Brendan Steele (+4500): This duo very nearly walked away with the title last year, coming oh-so-close, just two shots shy of a playoff. That netted them a solid T-4th showing. Bradley has been rock solid of late, posting three top-11’s in his last five starts, while Steele recently had a respectable T-13th showing at the Players Championship, and was T-10th at this event in 2018.
Kevin Kisner/Scott Brown (+10000): This tandem has proven to be rock steady in this competition, making them a boom or bust longshot. They very nearly won in 2017, eventually losing in a playoff. Then they held the 54-hole lead in 2018 and in 2019 finished T-5th.