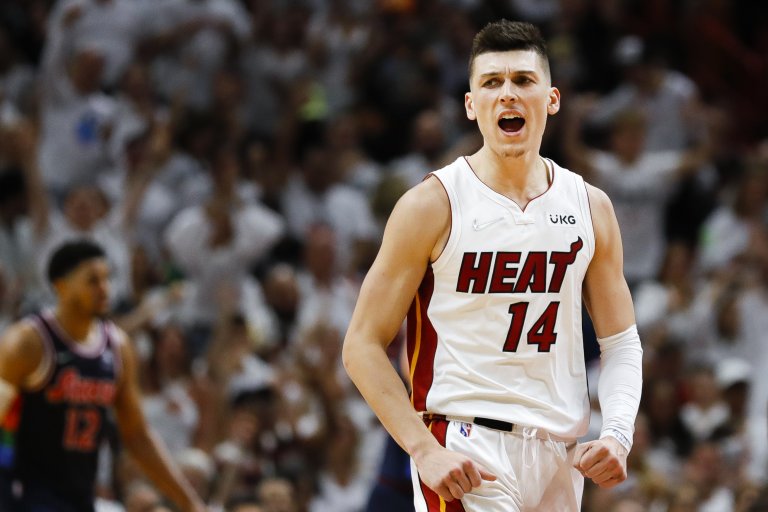 May 2, 2022; Miami, Florida, USA; Miami Heat guard Tyler Herro (14) reacts after scoring in the third quarter against the Philadelphia 76ers during game one of the second round for the 2022 NBA playoffs at FTX Arena. Mandatory Credit: Sam Navarro-USA TODAY Sports

The Miami Heat are aiming to take a controlling 2-0 lead of their playoff series with the Philadelphia 76ers on Wednesday night. Philadelphia is 8.5-point underdogs at FanDuel after losing the series opener by 14 on Monday.

The Sixers got a big performance from Tobias Harris, but James Harden was once again inefficient with just 16 points on 13 field goal attempts and five turnovers. Bam Adebayo and Tyler Herro came up big for the Heat, who outrebounded the Sixers by 10.

Odds as of May 3 at FanDuel

The total is set at 207.5 for Wednesday’s Game 2 with Philadelphia way out at +330 on the moneyline. Even with Joel Embiid potentially returning from concussion for Game 3, the Sixers are as long as +440 to win the series. FanDuel has a Miami sweep at +320.

DeAndre Jordan should not be starting playoff games in 2022. Doc Rivers is set to persevere with the former Clipper, however. Jordan was a -22 in 17 Game 1 minutes, and was ineffective at both ends of the floor.

The Sixers went on a second quarter run when Rivers played small, with Tobias Harris posting a +9 as a smallball five in those 12 minutes, but that hasn’t been enough to deter Rivers from starting Jordan.

“DeAndre Jordan, as much as I love him, a dear friend, at this point, I don’t think should be starting in a playoff game. Start Paul Reed and at times go small”

Paul Reed has shown positive flashes through the playoffs to date, but Rivers remains wedded to Jordan as the starting center in Embiid’s absence. This could ultimately cost the Sixers the series. Philadelphia’s rebounding was poor throughout, but Jordan didn’t help in that area of the game, and he’s too slow-footed defensively against this Miami Heat team.

Bam Adebayo went for 24 and 12 on just 10 shots in the opener. He was dominant at both ends, and the Heat grabbed 15 offensive rebounds. Jordan isn’t offering the Sixers much at either end, and the more minutes Rivers gives him, the harder it will be for Philly to win.

On top of the Jordan issue, though, the Sixers also made just six of their 34 threes. Georges Niang, Matisse Thybulle and Shake Milton combined to go 0-for-10 from the bench.

Regardless of opponent, such poor perimeter shooting is going to make it hard to win, and especially so without Embiid’s 30+ per game. The Sixers are a better shooting team than that — they were seventh in regular season three-point percentage.

Wonder how the Sixers won our ShotQuality score last night, despite losing the game 106-92?

In 1,282 games played this season, just five teams have underperformed their expected 3PT total more than Philly did last night— they scored 23 fewer points than expected from three 🤯🤯 pic.twitter.com/udnplSDqMY

The Sixers can expect to shoot the ball far better in Game 2. They underperformed the quality of their shots by a seismic amount. Shot Quality’s numbers actually gave the Sixers a better score than the Heat in Game 1, giving them a 65% chance of winning the game. Simply put, Philly was more competitive than the scoreboard might suggest.

Miami also shot well under 30% from three as a team, though that seemed a trade-off they were willing to make by leaving Duncan Robinson out of the rotation. The Sixers’ offense should be more productive on Wednesday night, though their chance of winning the game still heavily relies on Harden’s performance.

With no Kyle Lowry or Embiid, these two teams are more evenly matched than the scoreline in Game 1 showed. Miami is the better team, of course, and is well-deserving of favorites status by a considerable margin, but they rode their luck in the opener with Herro getting hot and the Sixers missing a lot of makeable shots.

Doc Rivers: “We like DJ. We’re gonna keep starting him whether you like it or not.” #Sixers

The Sixers were competitive for a lot of Game 1. While the Jordan minutes make it impossible to back them on the moneyline, all it takes is some slightly better outside shooting and they can cover this spread. Tyrese Maxey should be more efficient than he was on Monday, and Niang should knock down a few more shots.