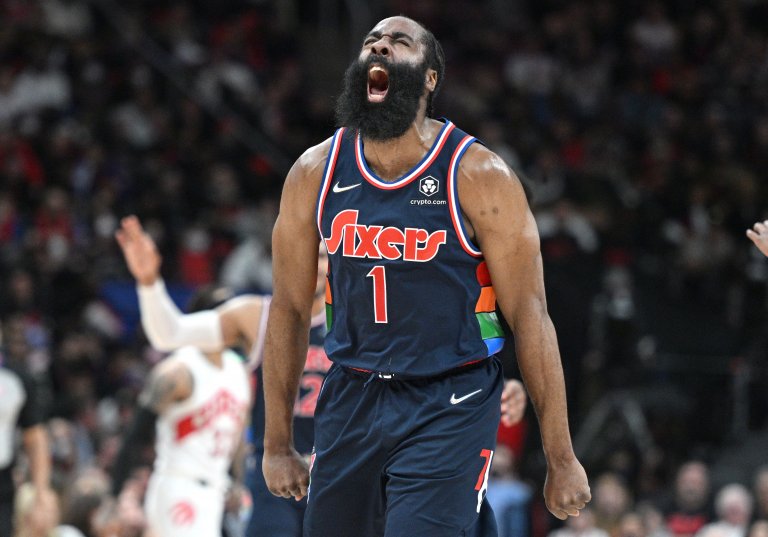 Apr 28, 2022; Toronto, Ontario, CAN; Philadelphia 76ers guard James Harden (1) reacts after making a basket against the Toronto Raptors in the second half during game six of the first round for the 2022 NBA playoffs at Scotiabank Arena. Mandatory Credit: Dan Hamilton-USA TODAY Sports

The 76ers and Heat begin their second-round series on Monday
Miami heads into Game 1 as a 7.5-point favorite with Joel Embiid sidelined for Philly
Find the 76ers vs Heat odds, preview, and picks below

The Joel Embiid-less Philadelphia 76ers take a trip out to South Beach on Monday for Game 1 of the Eastern Conference semifinals against the top-seeded Miami Heat. The tip-off is scheduled for 7:30 PM ET at FTX Arena. Keep reading for the 76ers vs Heat odds.

Philly took out the Raptors in six games in the first round, but Embiid suffered an orbital fracture and mild concussion in the series-clincher and will miss the first two games vs. Miami at the very least. As for the Heat, they wiped the floor with the Atlanta Hawks, taking them out in five games.

Odds as of May 1st at FanDuel Sportsbook.

With Embiid out, the Heat are a 7.5-point favorite here. In four meetings during the regular season, these Eastern Conference foes won two games apiece.

The Sixers narrowly escaped blowing a 3-0 lead against Toronto after coming up with a big win in Game 6 up North. Late in the third quarter though, Embiid took a nasty elbow from Pascal Siakam and has been ruled out for the time being as a result. There is some optimism he could return by Game 3  or 4 once he cleared concussion protocols, but nothing is set in stone at this point.

Joel Embiid won’t travel with the 76ers for Games 1 and 2, “but there’s optimism he could return” in Game 3 or 4, per @wojespn

Embiid will need to clear concussion protocol and have his orbital injury evaluated pic.twitter.com/oPa6jgkw5l

That being said, Philly will be hoping to stay afloat for the time being sans their star big man, which will be tough against a strong Heat squad. James Harden hasn’t been the same player of the past with the 76ers, but he must step up in a big way and carry the offensive load.

The Beard averaged 19 points, 10.2 assists, and five rebounds on 38% shooting in the first round. He did a nice job of getting downhill and attacking the rim in his last game after being criticized by Embiid. That needs to continue. Tyrese Maxey is another regular who is going to be relied upon to keep showing out.

The last time James Harden was forced to become a primary scorer:

The second-year guard has shown glimpses of brilliance throughout the season and he’ll be tasked with trying to make up for the loss of Embiid after putting up 21.3 points per night in six contests vs. Toronto. Philly’s bench is not even close to as deep as Miami’s which means the starting five needs to do most of the heavy lifting.

Miami cruised past Atlanta with ease, despite Jimmy Butler sitting in Game 5 and Kyle Lowry missing time as well due to a hamstring injury. Lowry is out for Game 1 on Monday, but Butler is expected to suit up. The Heat absolutely stifled Trae Young defensively, holding him to a mere 16 points per contest and showing why they’re truly one of the best two-way teams in the playoffs.

Jimmy Butler in the first round:

The crazy thing is though, the offense as a whole didn’t dominate. Jimmy Buckets averaged a monstrous 30.5 points, 7.8 rebounds, and 5.3 assists to lead the charge, but both Tyler Herro and Bam Adebayo struggled, posting just over 12 points per night in five outings. Bam was still a beast on the boards, but he’ll certainly need to pick it up from a scoring standpoint if Erik Spoelstra’s squad is going to make a title run.

One player who impressed however was Victor Oladipo. He stepped into the first unit when Butler was on the shelf and played fantastic, erupting for 23 points in 36 minutes of action. This Heat group is just so deep with various weapons, especially shooters. They will be a handful for Philly but even though Embiid is out, Miami has to come in with the same intensity from the get-go on Monday. Look for them to take advantage of Embiid’s absence and control the boards. That will certainly be a huge factor in Game 1.

It’s possible Philly could steal a game on the road, but it won’t be in the series opener. The Heat went 29-12 at FTX Arena during the season and haven’t lost there in the playoffs yet. Although Miami isn’t at full strength, they’ll comfortably cover the spread here thanks to the next-man-up mentality Spoelstra constantly preaches. The Sixers will take some time to adjust without their MVP finalist.