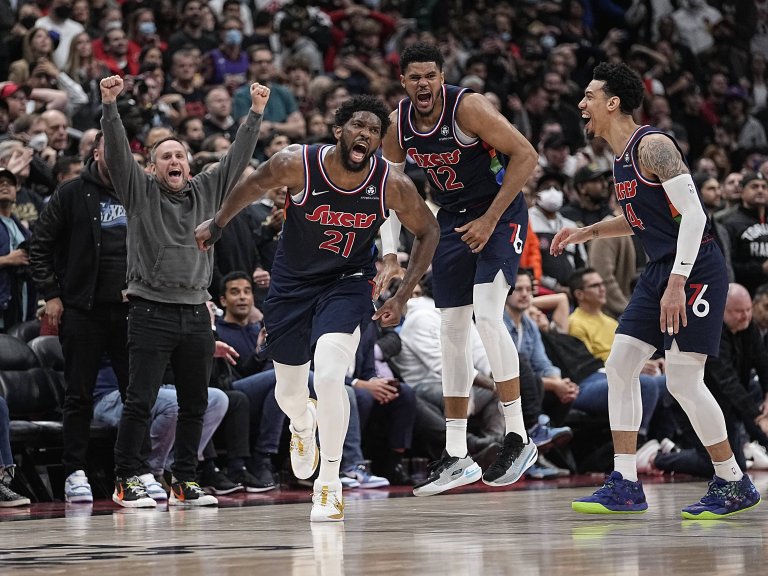 The Toronto Raptors were considered by many as a team no one wanted to face in the playoffs.

They’re one loss away from being the first team shown the door this postseason, as the Philadelphia 76ers try to wrap up an opening-round sweep on the road Saturday.

Philly has been a level better than their opponents this series, but will enter Game 4 with injury concerns surrounding star Joel Embiid.

Still, the Sixers are 3-point road favorites when things tip-off from Scotiabank Arena at 2pm ET. It’s a game that can be seen live on TNT.

Odds as of April 22nd at Caesars Sportsbook

The biggest story in the off days between games is the surprising news that Embiid has a thumb injury on his right hand.

One of the finalists in the 2022 NBA MVP odds, Embiid was seen wearing a soft cast on his wrist during the second half of last game.

Philadelphia 76ers star Joel Embiid is experiencing pain and discomfort in his right thumb but practiced today and and expects to play in game 4, sources told ESPN. It’s possible he gets an MRI in the near future to determine the extent of the injury, sources told @wojespn and I

A report by The Athletic’s Shams Charania said the big man could be dealing with a torn ligament. An MRI will likely be needed to figure out the severity.

Nothing has been confirmed by the Sixers, but reports suggest he is experiencing pain and discomfort, though he practiced Friday and wasn’t on the injury report. Embiid is expected to play through the pain and be available for Game 4.

Toronto still doesn’t know if Scottie Barnes will be a go for Game 4, as he deals with an ankle injury.

A favorite in the 2022 NBA Rookie of the Year odds, Barnes suffered the injury in Game 1 when when he was stepped on by Embiid.

Prior to the news of the Embiid’s thumb injury, all the buzz was about his incredible Game 3 performance. He drilled the eventual game-winning three-pointer with 0.8 seconds left, as the Sixers came back to beat the Raptors 104-101 in OT.

JOEL EMBIID WITH THE HUGE THREE IN OT 😱 pic.twitter.com/VKpdy4HszF

After a slow start, Embiid poured it on in the second half, finishing with a game-high 33 points and 13 rebounds. He went 12-for-20 from the field and carried the load after James Harden fouled out in the fourth quarter, with 28 second-half points.

Embiid has been a wrecking ball in Toronto’s plans, averaging 27 points and 13 rebounds this series on a sparkling 62.9% true shooting percentage.

it got muddy on both ends of the court. 😈

Harden had a nice game before being forced to the bench with his sixth foul, putting up 19 points and 10 assists. Tyrese Maxey had 19 points and four rebounds, while Tobias Harris had 11 points and 12 rebounds.

Philadelphia never had a lead in regulation, and trailed by as many as 17 points.

Their defense has been solid against Toronto, as they rank fourth-best in the playoffs, holding them to 103.5 points through three games.

The 5 Best Ontario Sports Betting Apps to Get This Weekend

In a game the Raptors needed their two main guys to land the plane, both Fred VanVleet and Pascal Siakam struggled.

VanVleet, named to his first all-star team this year, was just 3-for-13 shooting, including a woeful 2-for-10 from downtown. He finished with 12 points and nine assists. For the series, FVV is averaging 16.7 points on just 37.3% shooting from the field.

.@Kayla_Grey and @JLew1050 discuss Pascal Siakam and Fred VanVleet, and how the Raps are going to need a lot more out of their two stars. pic.twitter.com/ii3ME1OuLZ

Siakam, one of the favorites to land a coveted spot on one of three all-NBA teams, also finished with 12 points, adding five rebounds and four assists. He shot 6-for-16 for the game, but disappeared in the winning time, failing to score a single point in the second half.

With their struggles, and with Barnes’ production in street clothes, Toronto is averaging just 99 points on 43.4% shooting the last two games.

Defensively, they’ve cratered under Embiid’s relentless offensive attack, and are surrendering 115.7 points per game, the second-worst mark in the playoffs. Only the Denver Nuggets, also on the verge of being swept away, have been worse.

While the series may soon be over, there is plenty of excitement you can build with a single-game parlay (SGP) for Game 4.

All picks courtesy of DraftKings.