It’s been a very informative few days at Newmarket as many classic credentials were put on the line, but few feathers were ruffled, and horses like Native Trail only enhanced their claims and he is now as short as 6/4 for the 2,000 Guineas. Today sees the meeting come to a close but punters are not spoilt for choice on Thursday. 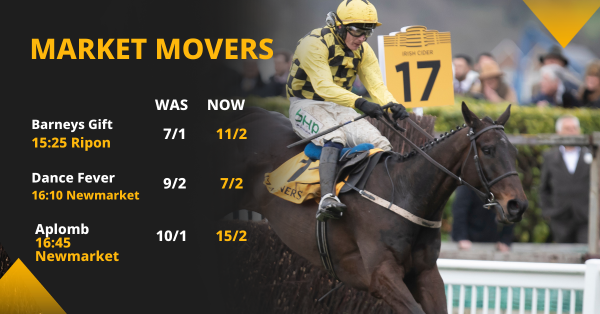 In the 14:15 at Ripon, Mark’s Choice 5.59/2 will look for back to back wins in this race, and his trainer Sam England has an excellent 50% strike rate with older horses (three for six).

At Ripon in the 16:00, trainer William Haggas saddles Tamilla 2.35/4, and he has a whopping 38% strike rate with three-year-olds at this venue.

At Newmarket in the 14:25, trainers Simon and Ed Crisford are zero for 13 with their three-year-olds. They will be hoping to turn their fortune around with Anthem National 3.55/2 who takes on the impressive debut winner Audience 1.910/11.

In the 15:00 at Newmarket, the late jockey Pat Smullen will be remembered with a race named in his honour.

The competitive handicap sees Andrew Balding runner Carolus Magnus 3.7511/4 look for back to back wins on this Newmarket card. Balding is profitable £34.14 to a £1 level stake at Newmarket in the last five years.

It’s Fillies and Mares day at Cheltenham today, and interestingly, Henry De Bromhead and Rachael Blackmore partner for one runner in the 16:25 Mares’ Handicap Chase with Alice Avril 3.55/2. The Glancing Queen 1.910/11 heads the market but is she better than 140? Maybe not.

In the 17:00 bumper at Cheltenham, Alan King saddles Edwardstone’s sister Nothingtochance 5.04/1, second favourite and no winner of this race in the last ten years, carrying more than 11st6lbs. Today’s favourite Mullenbeg 2.111/10 could be one to take on carrying 11st7lbs.

At Exeter, owner Judith Wilson has had four winners from her last ten runners (40%). She has two in the 18:10 at Exeter Red Happy 2.35/4 and Dindin 13.012/1. The last time she had two in a race, they finished first and second at Wincanton on March 30th. Forecast anyone? 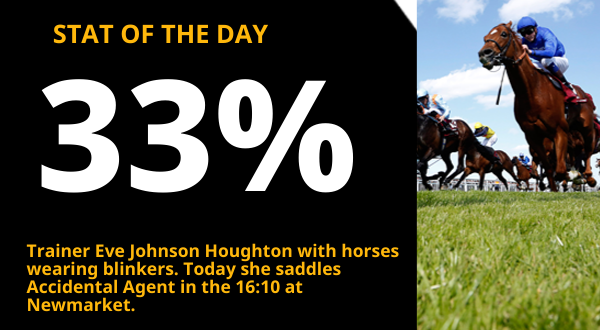 Today’s furthest traveller is trainer Kevin Ryan, who made the 242-mile journey to Bath for his runner Peggy Sioux in the 17:30. Jockey Neil Callan scored on Wednesday for Ryan onboard a 25/1 chance at Newmarket.

Today we are back at HQ and looking for a little more luck in this section as we take a closer look at the day’s feature race, the 15:35 Feilden Stakes.

Masekela sets a lofty standard on his two-year-old form and warrants his place on seasonal return at the top of the market. He was a rock-solid yardstick last term but perhaps lacked the scope for improvement of a few of his rivals, and his form plateaued when not looking comfortable on this Rowley Mile track on his final start.

Connections may have found a good opportunity for him to get back on track today, and he sets the bar high. Still, it would be no surprise to see one or two of these rivals surpass the level he has set should he not be on his A-game on return.

Sonny Liston impressed with the manner of his debut victory at Sandown when effortlessly cruising to the front and pulling clear of his rivals. The bare form needs significant improvement, but he couldn’t have been more impressive. He is a well-balanced horse that should have no issue with today’s course and distance, and it’s highly likely there is a good deal more to come.

He is the one that could improve past all of his rivals today, and market support should be taken seriously.

Cresta is another that has reached a high level in short time, but he never looked at home on the Newmarket undulations on his second start, and he is one likely to be seen to best effect on a flat track. Still, connections are well within their rights to give this course another try, and with age may come balance. He needs to improve, with his current form being rated around the 100 mark, but his second in the Horris Hill has worked out well, and he will be fighting out the finish.

Masekela could run away with this contest, but suspicion is he will be seen to best effect elsewhere, and the same goes for Cresta. Sonny Liston looks worth chancing at 3/1 or bigger and is open to significant improvement off the back of a devilish debut display.

Timeform offer up three of their best at Newmarket

Timeform’s Andrew Asquith highlights a NAP, Next Best and Each-Way selection at Newmarket on Thursday 14 April.

In the 14:25 at Newmarket, Audience 1.84/5 could potentially be a superstar, but the keyword is could. His debut performance was impressive, but the time figure was ordinary, and I wasn’t convinced with his head carriage or the hanging to the left. It may be a mistake to take him on, but Anthem National 3.55/2 took a big step forward at Lingfield when a close third in Listed company and the form of that race looks very strong in the context of this one.

He stuck to the task well in the closing stages at Lingfield and finished with running left behind El Cabballo – unbeaten since his debut and rated 107. The second was the useful Witch Hunter, rated 101, who arrived on the back of victory at Wolverhampton, and the three pulled five lengths clear of the 90 rated third, while the fifth had some strong two-year-old form in what was a solid Listed contest.

He was conceding experience to the front two, and the performance left the impression he had more to offer. The switch to turf for the first time should be a positive and another step forward today with a race fitness advantage over his main market rival, could see him as a surprise winner.

If you’re at a loose end tomorrow, consider coming down to the Peter O’Sullevan Lambourne Open Day, where many horse racing yards open their doors to the public.

Lots is going on throughout the day, including Grand National-winning jockey Sam Waley-Cohen riding in the Show Jumping competition against AP McCoy, Camel Racing, a Farrier display and a parade of equine heroes, which includes Altior, Battaash, Coneygree, Shishkin and Sprinter Sacre.

It’s an excellent day which starts at 8am. I will be there, and I hope to see you.