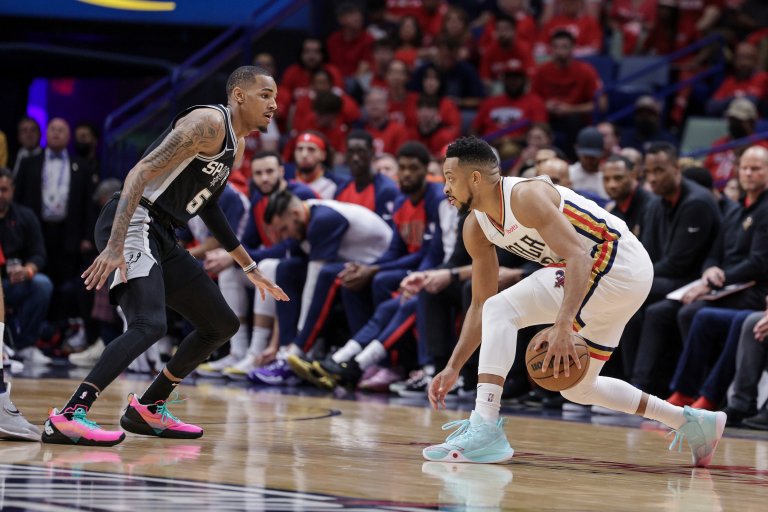 There are two Play-In Tournament games on Friday night, with the winners advancing to the first round of the postseason
The Cavs face the Hawks in the East, while the Clippers clash with the Pelicans in the West
Find the player props and best bets below

The NBA Play-In Tournament officially wraps up on Friday night before the playoffs begin this weekend.

Out in the East, the Atlanta Hawks will be looking to ride the high after a big win over the Charlotte Hornets as they visit the Cleveland Cavaliers, who lost to the Brooklyn Nets in the #7 vs #8 game. The winner will proceed to face the top-seeded Miami Heat in the first round.

In the West, The Los Angeles Clippers play host to CJ McCollum and the New Orleans Pelicans. The team that comes out victorious takes on the high-flying Phoenix Suns in the opening series.

Keep reading for the player props and best bets.

Odds as of April 14th at FanDuel

The Pelicans went out and got McCollum at the trade deadline and since he’s arrived, the former Blazers guard has been absolutely phenomenal.

It appears all CJ needed was a more advanced role after so many years in the shadow of Damian Lillard. The veteran averaged 24.3 points, 5.8 assists, and 4.5 rebounds in 26 games with the Pels and he showed out in a big way against the Spurs on Wednesday.

McCollum had 25 points by halftime and although he was quiet in the final two periods, the 30-year-old still finished with 32. Now, this might sound risky because CJ has only hit the over in points in three of his last 10 games.

That being said, he is coming off a massive performance where he was scoring in every way imaginable. This is obviously a win-or-go-home contest for New Orleans and although I’m not going to say they’ll beat LA, McCollum will step up and play an integral part because he is a clutch player. CJ will finish either near 30 points or over for the second game in a row.

Hunter Gets Hot From Deep

Surprisingly, it wasn’t totally the Trae Young show against the Hornets. Yes, he still finished with 24 points and 11 assists, but the Hawks guard had a lot of help.

The entire starting five finished in double-figures, with De’Andre Hunter pouring in 22 points for the second straight contest. This will not be an easy win for Atlanta. The Cavs are a solid team and the Hawks will need to be firing on all cylinders, especially from one area in particular: three-point land.

The Hawks are 27-17 since he came back from injury in January. pic.twitter.com/ABy8hSfqJ2

ATL essentially lives and dies by the triple and thankfully, Hunter was one of the contributing factors in their efficient night vs Charlotte. They shot over 50% as a group from deep, with the former Virginia standout going 2-for-3.

The game before that? Hunter was a perfect 4-for-4 from beyond the arc. His over in points also holds value, but the over in treys stands out here. At 1.5, there’s a very high chance Hunter easily drains two or more in Cleveland.