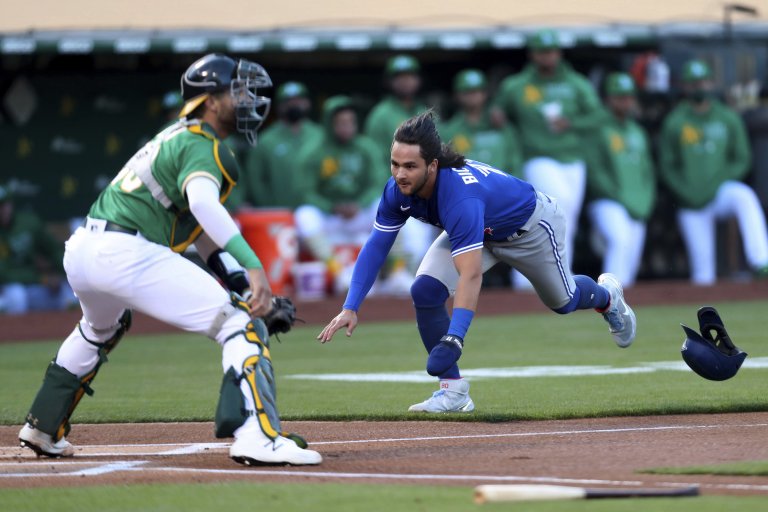 Toronto Blue Jays’ Bo Bichette dives for home as Oakland Athletics’ Austin Allen waits for the throw during the first inning of a baseball game in Oakland, Calif., Wednesday, May 5, 2021. (AP Photo/Jed Jacobsohn)

The Toronto Blue Jays are -230-home favorites over the Oakland Athletics in an American League afternoon game slated for Saturday, April 16
Toronto starter Hyun Jin Ryu is 2-0 with a 3.20 ERA in his career against the A’s
See the Athletics vs Blue Jays odds and predictions

The arrival of the Oakland Athletics to Toronto might be just what the doctor ordered for the Blue Jays and starting pitcher Hyun Jin Ryu.

Oddsmakers are agreeing with these trends. It’s the Blue Jays who are set as -230 home favorites over the Athletics. Overall, Toronto is 12-2 straight up in the past 14 games against Oakland.

Saturday’s first pitch at the Rogers Centre is set for 3:07pm ET. The forecast is calling for cloudy skies, 15 mph wind and a temperature of 47 degrees. But should conditions be bad, not to worry. They’ll simply keep the stadium’s retractable roof shut.

Is it time for the Blue Jays to start worrying about 35-year-old lefthander Ryu? He was smacked around in his season debut. The Texas Rangers roughed him up for five hits and six earned runs in just 3.1 innings of work.

Against the Rangers, Ryu was solid through the first three innings and then it all blew up in spectacular fashion in the fourth inning as he squandered a 6-1 Toronto lead. The Jays opted to give Ross Stripling a spot start in Friday’s series opener against Oakland. That’s enabling Ryu to go Saturday on an extra day’s rest.

Clearly, Toronto is displaying signs of concern about Ryu. The staff ace in 2020 and an AL Cy Young Award finalist, Ryu is now listed as the #4 starter in the Blue Jays’ rotation.

Paul Blackburn was sensational is his first start of the season against Tampa Bay. Can he do it again, though? That’s been the issue with Blackburn. Last season, in nine starts, he won consecutive starts once.

Blackburn was 1-3 in four road starts with an 8.44 ERA. That included a 10-8 loss on Sept. 4 at Toronto. In that game, the righthander surrendered nine hits and four earned runs in 3.2 innings pitched. He finished with as many strikeouts has home runs he gave up (three apiece).

Jays outfielder Lourdes Gurriel Jr has only faced Blackburn twice but he’s made the most of those limited plate appearances. Gurriel is 2-for-2 (1.000), including a solo home run that came at the Rogers Center last year. Toronto outfielder George Springer is 2-6 off of Blackburn.

Toronto isn’t just beating the A’s. The Blue Jays are wearing out the Athletics. The Jays have outscored Oakland 93-49 over the past 14 games.