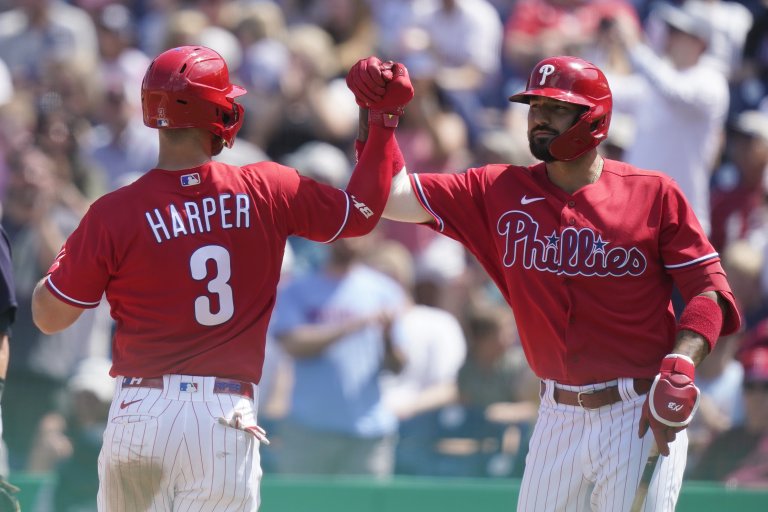 The Athletics face the Phillies on Friday in the first of a three-game set
Frankie Montas starts for Oakland, while Aaron Nola gets the ball for Philadelphia
Read on for the A’s vs Phillies odds, lines, picks, and more

It’s an interleague matchup to begin the season on Friday for the Oakland Athletics and Philadelphia Phillies as they begin a three-game series at Citizens Bank Park. The first pitch is scheduled for 3:05 PM ET.

The A’s will send their only reliable arm left on the roster to the mound in Frankie Montas. The Phils counter with hard-throwing righty Aaron Nola. This is actually the first meeting between these two teams since the 2017 campaign where the A’s won two of three on the road.

Odds as of April 7th at Caesars Sportsbook.

The Phillies are a -180 favorite in Game 1 of the series. Their World Series odds also sit at +2500 after a productive winter.

Montas is about the only pitcher left on this A’s roster who wasn’t traded away in the offseason and he’ll be making his second Opening Day start in three seasons. The big right-hander enjoyed a fine year in 2021, making an American League-high 32 starts while going 13-9 with a 3.37 ERA. The Dominican also struck out 207 hitters in 187 innings, serving as one of the staples in the Oakland rotation.

Now, he is the clear-cut ace and will be relied upon to put together a solid outing on Friday against a tough Phillies offense. But, he’s never pitched against them in his MLB career. That could be a good and a bad thing, only time will tell. He did struggle in Spring Training though, compiling a 6.35 ERA in two outings.

Nola meanwhile, struggled last season, going 9-9 with a dismal 4.63 ERA. His strikeout numbers were very impressive, showing the ability to sit down hitters on a consistent basis. But, the former first-round pick gave up 26 homers in 32 appearances. He also finished the campaign on a very poor note, posting an ERA over six in the month of September.

Nevertheless, the Phillies constantly instill their trust in him. This will be his fifth Opening Day start in a row and 21 was his worst season yet. Philadelphia will be hoping he can bounce back in a big way, starting with Friday. He’s never faced Oakland in his career, either.

All the Best MLB Sports Betting Promos for Opening Day

Oakland completely cleaned house in the offseason, losing the likes of Matt Chapman, Chris Bassitt, Sean Manaea, and Matt Olson. They got a ton of prospects in return, but this will likely be a transition year for them under first-year manager Mark Kotsay. Chad Pinder, Stephen Piscotty, and Stephen Vogt are a few familiar names who will be relied upon offensively for the A’s in 2022.

The #Dodgers, #Mets, #Phillies and #Padres will all have a higher monthly payroll than the #Athletics‘ entire payroll for the season.

Phillies Ready to Do Damage

While Philly’s defense and pitching are usually their weak spots, they did a tremendous job of going out this winter and adding some huge offensive pieces. The Phils signed free agent Nick Castellanos to a long-term deal and also brought in an impact bat in Kyle Schwarber.

Both guys should fit in nicely alongside the likes of Bryce Harper and JT Realmuto in the heart of the lineup. The Phillies definitely put their power on display in Spring Training down in Florida as well, clubbing 26 homers. Harper went deep eight times on his own.

Honestly, this is a tough call. There are two top-tier arms on the mound and both lineups are unfamiliar with each pitcher. That being said, I honestly like the under here in runs. Expect Montas and Nola to keep their respective teams in this series opener in a relatively low-scoring affair.