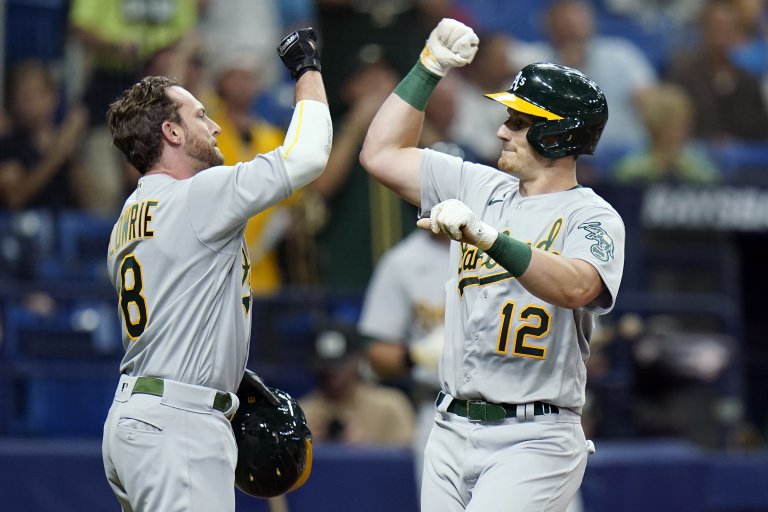 The fourth and final game of the Athletics and Rays series goes down on Thursday, with Tampa Bay looking to salvage a split. Oakland took game three on Wednesday, jumping out to a 3-0 lead and holding on for a 4-2 victory.

The win improved the A’s to 3-3 this season, but it wasn’t enough to earn them respect in the eyes of online sportsbooks.

Odds as of April 13th at Caesars Sportsbook.

The Rays opened up as -200 moneyline favorites in a contest that features a total of 8 runs. First pitch is scheduled for 1:10pm ET inside the dome at Tropicana Field, a stadium where Tampa Bay is 4-2 this season.

The Rays will send Drew Rasmussen to the hill, while the A’s will counter with Cole Irvin. Rasmussen is penciled in as Tampa’s number three starter this season, and is coming off a mediocre debut against the Orioles. The 26-year-old earned a no decision in a 5-3 Rays victory, surrendering two runs and three hits over 4 innings.

These two cutters to Chirinos are just FILTHY.

Both these pitches had 20″ of vertical movement at 95-96 mph. This is literally–and I’m not exaggerating–Kenley Jansen cutter territory.

The unicorn has a twin. 🦄 pic.twitter.com/LwEOxmdVT9

Rasmussen impressed in 2021 by posting a 4-1 record over 35 appearances (10 starts) with Milwaukee and then Tampa Bay. He won’t fill up the boxscore with strikeouts, but he will keep the ball in the yard. He boasted a minuscule 0.59 HR/9 rate last season, while yielding just a 30% fly ball rate.

He’s never faced Oakland in his career, but has pitched well at the Trop. In 11 career appearances in Tampa Bay, he’s surrendered only 10 runs over 28 innings.

Irvin meanwhile, is coming off a rough outing. He was rocked by Philadelphia is his 2022 debut, giving up seven hits and three home runs over 5.1 innings. The tough start follows a 2021 campaign where he was inconsistent at best.

Irvin yielded a .272 batting average to enemy hitters last season, while losing 15 of his 27 decisions. He was 0-2 versus the Rays in two starts, giving up 11 hits and six runs in 12 innings or work.

Home runs were an issue for Irvin last season versus Tampa Bay as well, as he coughed up three to the Rays. Tampa Bay began the season as a top-10 contender in the World Series odds, but its offense has been up and down so far.

4-2 final as the @RaysBaseball fall in Game 3. pic.twitter.com/ROXqAwS4Kt

On paper, the Rays’ 28 runs over six games is above league average, but 17 of those runs came in just two games. Oakland has held them to only two runs in two of the three meetings in this series, but a date with Irvin could help ignite the Tampa Bay bats.

The Athletics on the other hand have shown promise at the plate during this series scoring 25 times already, but negative regression is likely coming their way. Oakland is batting .407 with runners in scoring position over the past three games, and that simply isn’t sustainable for a team with the second lowest line in the MLB win totals.

Tropicana Field is typically one of the least hitter friendly parks in baseball, so it’s not surprising the under in Rays home games is 4-2 this season. One of those home games that fell short of the total was started by Rasmussen, and dating back to last year six of his past seven starts have produced a total of seven runs or less.

As good as the Athletics bats have looked during this series, don’t forget they averaged less than three runs per game during their first three outings versus Philly. I’m looking to bet they revert back to the offensive form they showed versus Philadelphia which should help this contest stay under the total.