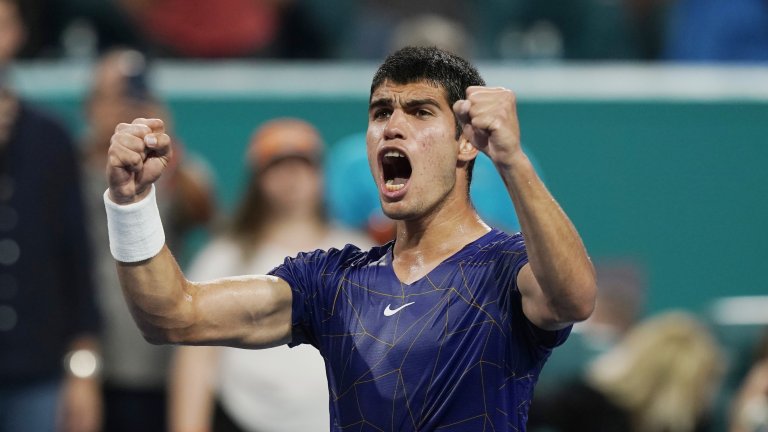 Stefanos Tsitsipas, who won Monte Carlo Sunday, is the top seed in Barcelona
Carlos Alcaraz, the 18-year-old Miami Open champion, is the favorite to win

Read on for our analysis and predictions

Notwithstanding his opening exit at Monte Carlo last week, 18-year-old Spanish phenom Carlos Alcaraz is the favorite to win this year’s Barcelona Open.

Odds as of April 17th at BetMGM.

There are some big names missing in this year’s draw, and other names who a few years ago might well have figured at the top of the list.

Rafael Nadal is 66-4 in Barcelona during his career, and has won the tournament 12 times. But he’s still not ready to return after suffering a stress fracture to his rib at Indian Wells.

Novak Djokovic has only played it twice – in 2006 and 2018 – and lost in the first round both times. And he’s occupied elsewhere: at his own competing tournament in Belgrade.

So it’s wide open for Alcaraz. Or a number of others.

It’s an astonishing thing when a player who has never won a match at a tournament is the favorite. But such is the buzz around Alcaraz these days.

Barcelona isn’t even “home turf” for Alcaraz, who is from El Palmar, in the southeast corner of the country.

“It’s part of the job. You have to live with the defeats as well as possible. It’s a defeat, not death. You have to play one match after the other. It was a good first match on clay even if I have to prepare more on this surface.”

He was a wild card a year ago, and lost to Frances Tiafoe in straight sets in the opening round. This year, he’s the No. 5 seed.

But his biggest challenge is his draw; Alcaraz’s quarter is arguably the toughest, with No. 1 seed Stefanos Tsitsipas or possibly Grigor Dimitrov as a potential last-eight opponent.

Tsitsipas, a two-time finalist (losing to Nadal both times, including last year) will be tired. But he also has a first-round bye and a couple of days to recover.

Musetti is a big talent, as he demonstrated last week in overmatching top-10 Canadian Félix Auger-Aliassime in the second round of Monte Carlo.

But old junior rival Baez, who is actually ranked higher than Musetti, is a clay-court danger with his movement and consistency.

Musetti’s career winning percentages are just over 40 per cent on hard courts (35 per cent over the last 12 months) and 62 percent on clay.

Baez’s numbers are similar at the Tour level. But those don’t count all of the lower-level Challenger and ITF tournaments he’s played.

Musetti was a slight favorite 24 hours ago; but now they’re in a dead heat.

Andujar is a former Barcelona finalist (back in 2015), which is probably the top item on his career resumé. And at 36, he remains a quality opponent on the red clay. And he already has two clay events under his belt this spring.

Well played to both Nishikori and Andujar in the 2015 Barcelona final pic.twitter.com/fwjwNHHCyN

Humbert has played just one match on clay so far – a first-round loss to Andujar’s countryman Pedro Martinez last week in Monte Carlo. He’s just 2-8 on the season so far and hasn’t yet won back-to-back matches.

Humbert does have a win in his only match against the Spaniard. But that was on a hard court, in hot conditions, at the Tokyo Olympics last summer.