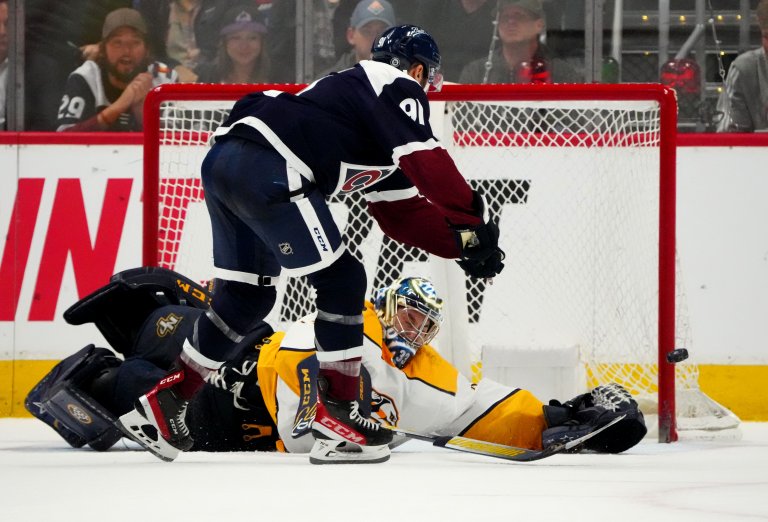 All the Nashville Predators needed to do to avoid a first-round playoff matchup with the top-seeded Colorado Avalanche was beat the NHL’s worst team, the Arizona Coyotes. Then all the Preds needed to to was maintain a 4-0 advantage over the Coyotes.

They did neither. Arizona came roaring back for a 5-4 victory, leaving Nashville to face off with Colorado.

The consequences of that abysmal failure are evident in the odds on this series. The Avalanche are overwhelming -600 favorites in this best-of-seven set. That’s the shortest betting line being offered on any series in the first round of the Stanley Cup playoffs.

Odds as of May 1st at Caesars Sportsbook

In the NHL playoff bracket, the Avs are the betting favorites in both the Western Conference odds (+150) and the Stanley Cup odds (+350).  Game 1 in this series is slated for 9:30pm ET at Ball Arena and is being broadcast by ESPN. Let’s look at the entire Avalanche-Predators series slate:

Saros Loss Would Be Crippling Blow to Predators

Of all goalies in the Stanley Cup playoffs, none played more games (67) or faced more shots (2,107) than Nashville’s Juuse Saros. He’s sixth in the Vezina Trophy odds at +8000. His presence would be one area in which Nashville is holding a significant edge over Colorado.

However, a non-contact ankle injury suffered in a late-season game against the Calgary Flames has put Saros on the shelf. Preds coach John Hynes is saying that the team is hopeful that Saros will be able to play against the Avalanche.

If Saros can’t go, Nashville’s future is in the hands of David Rittich. He’s played 17 games this season. Rittich’s .886 save percentage suggests that his nickname of Big Save Dave is a misnomer.

Meanwhile, Avalanche coach Jared Bednar is stating that they will be 100% healthy when they take the ice for Game 1. That means captain Gabriel Landeskog, out since undergoing knee surgery in March, will be returning to the lineup.

The Avalanche and Predators will be meeting for just the second time in the Stanley Cup playoffs. Nashville was heavily-favored over Colorado in a 2018 first-round series. The Predators won in six games.

These two Central Division rivals met four times during the regular season. Nashville has won the past three meetings, including one victory at Colorado but don’t read too much into that. The last two were one-goal decisions.

The top two contenders in the Norris Trophy odds will clash in this series. Colorado’s Cale Makar is the slight favorite to win over Nashville captain Roman Josi. Josi led all NHL defensemen in assists (73) and points (96). Makar was the top goal scorer among defenders with 28.

Nashville has enough talent to match up with Colorado’s top unit. In Matt Duchene and Filip Forsberg, they are one of just two NHL teams to suit up two players with at least 42 goals this season.

You normally can’t score from that far out on a wrist shot, but then again Cale Makar isn’t normal pic.twitter.com/6gPYyGbTc9

However, Colorado can just keep sending quality talent over the boards. Eight Avalanche players hit 50 points this season, tied with St. Louis for the most in the league. The Avs show four 80-point scorers, the most in the NHL.