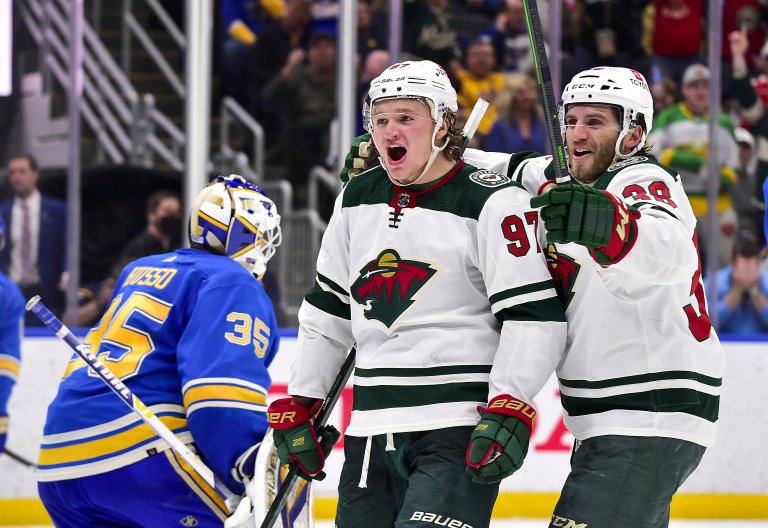 The St. Louis Blues and Minnesota Wild open their first round series on Monday, May 2nd
The Blues swept all three regular season games against the Wild this year
Read below for the Blues vs Wild odds, picks and prediction for Game 1

It should be one of the most exciting series of the first round when the St. Louis Blues lock horns with the Minnesota Wild. Both teams were amongst the highest scoring in the league this season.

Game one between the Blues and Wild is on Monday, May 2nd with the faceoff scheduled for 9:30 pm ET at the Xcel Energy Center in Minnesota. The Wild are listed as -143 home favorites in the Monday NHL odds with the Blues paying +120 to win on the moneyline.

Let’s preview this matchup and take a further peak at the Blues vs Wild odds while offering you our NHL best bet.

Odds as of May 1st at Barstool Sportsbook.

There’s no place like home, especially for the Wild whose 31 wins in their own arena were tied for 3rd in the NHL this year. That’s one of the reasons they have -143 odds to win game one which gives them an implied win probability of 58.85%.

Most people wouldn’t usually associate goal scoring with this Blues squad, but they have the most offensive depth of any team in the league. They had nine 20-goal scorers this year, something no other team has accomplished in three decades.

You can’t play shutdown hockey against a team with that much depth amongst their top three lines. St. Louis sits fifth in the Western Conference odds, a couple spots below their opponents in the first round.

The Blues had the fifth best offense in the NHL this year at 3.8 goals per game and where they have really thrived is on special teams. Minnesota would be wise to avoid the penalty box, as the Blues power play clicked at a 27% rate this season, good for second overall in the league.

It’s been a terrific year in Minnesota as they look to take another step led be sophomore sensation Kirill Kaprizov. The Russian winger continually pushed his way up the ladder in the Hart Trophy odds after finishing the season with 108 points, good for fifth in the league.

Minnesota has thrived at home this year and lost only one game in the confines of the Xcel Energy Center in all of April. Not only did they get a spectacular season from Kaprizov, but they got career years from Kevin Fiala, Mats Zuccarello and Ryan Hartman as well.

Sure, St. Louis boasts tremendous balance on offense, but the Wild ranked in the top 5 in goals per game this season too, with 3.7. Pair that with the terrific goaltending they’ve gotten in the last month from Marc-Andre Fleury and Cam Talbot and it’s easy to understand why their currently ranked 7th in the 2022 Stanley Cup odds.

Both sides had some injury concerns heading into this, but it appears as though they’ve all been alleviated. Marco Scandella and Brayden Schenn both practised and are probable for the Blues, while Marcus Foligno and Zuccarello both are nursing some bumps and bruises, but are very likely to be in the lineup in game one.

The Blues swept all three games against the Wild this season include a New Year’s Day Winter Classic at Target Field that St. Louis won 6-4 on the strength of a four point second period from Jordan Kyrou.

Every game between the Blues and Wild went over the total this year, as they combined for 28 goals in three matchups, an average of over nine goals per game.

Playoff hockey is known for buckled down low scoring affairs. That’s not how either of these teams were successful this season. The Blues in particular, went over the total in eight of their last 10 games of the season.

Anyone know how many goals we’ve scored since Jon Hamm showed up in the broadcast booth?

With both squads icing almost fully healthy lineups, it’s hard to see this not being a back and forth goal filled contest. For a post season game, the total has been set at a relatively high 6.5 goals and the public has been backing the under, possibly because of that large number.

However, the oddsmakers put that number that high for a reason. These teams love scoring. Just because it’s a playoff game, that doesn’t seem like enough reason to buck all the other trends and pick the under. Fade the public and pick over 6.5 goals in the Blues vs Wild Monday NHL odds at Barstool Sportsbook.