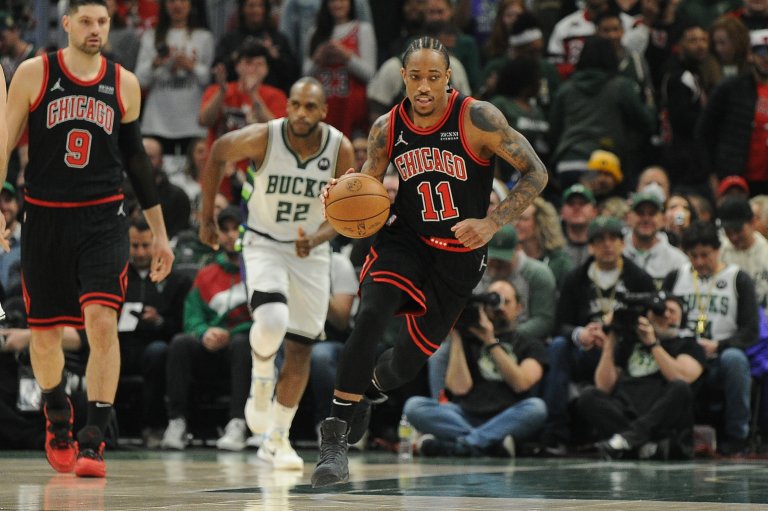 Apr 20, 2022; Milwaukee, Wisconsin, USA; Chicago Bulls forward DeMar DeRozan (11) brings the ball up the court against the Milwaukee Bucks in the first half during game two of the first round for the 2022 NBA playoffs at Fiserv Forum. Mandatory Credit: Michael McLoone-USA TODAY Sports

Game 3 between the Bucks and Bulls is scheduled for Friday, April 22nd
Chicago evened up the series at one on Wednesday night in Milwaukee
Read on for the Bucks vs Bulls odds, preview, and predictions

Game 3 of the first-round series between the Milwaukee Bucks and Chicago Bulls heads back to the Windy City on Friday for the first playoff contest at the United Center since 2017. The tip-off is scheduled for 8:30 PM ET. Keep reading for the Bucks vs Bulls odds.

The Bulls bounced back with authority in Game 2 on Wednesday, securing a 114-110 win courtesy of DeMar DeRozan’s stellar night. The Bucks meanwhile lost a massive part of their first unit as Khris Middleton exited early with an MCL sprain. Unfortunately, he will miss the rest of the series, putting even more of the load on the shoulders of Giannis Antetokounmpo.

Odds as of April 21st at FanDuel.

The Bucks are a slim 2.5-point favorite here and went 19-17 ATS on the road during the regular season. Illinois online sports bettors must be loving getting the home side at plus money.

There is no doubt losing Middleton is a devastating blow to the Bucks. But, we have to remember, this is a championship team that is so much more than one or two players. Giannis has also been brilliant in the opening round thus far, really putting together a fine performance in Game 2, showing out for 33 points, 18 rebounds, and nine assists.

Unfortunately, the Greek Freak, sitting third in the NBA MVP odds, didn’t get a lot of support.

Brook Lopez’s 25 points were about the only other bright spot, with Jrue Holiday registering just 15 while the bench literally scored eight points. It didn’t help that Bobby Portis left early with an eye contusion, but the fan-favorite will be back in the mix on Friday.

Mike Budenholzer’s squad actually shot the ball fairly well, draining 39% of their triples and 46% of their field goals. Needless to say, the absences of Portis and Middleton were definitely felt.

“Khris is a huge part of this team, this organization, this city. We’ll just keep rallying with him.” pic.twitter.com/PJHItizVIb

The key in Game 3 is to get going early and limit DeRozan in particular. He was cooking the Bucks all night long. That can’t happen again. Also, Holiday and Portis need to step it up in a big way alongside Giannis and Lopez to make up for the loss of Middleton, who is a vital piece on both ends. The second unit really needs to produce more as well, especially when the likes of Antetokounmpo and Holiday need rest.

Chicago went a brutal 2-21 against top-four teams from each conference in 2021/22 and honestly, most believed they would get bounced rather easily by the Bucks. That being said, the Bulls proved the critics wrong on Wednesday, balling out in a big way after an atrocious shooting night in Game 1. DeRozan erupted for 41 points on 16 for 31 shooting and most notably, he went 8 for 9 when Giannis was guarding him.

From @ESPNStatsInfo: DeMar DeRozan went 8 for 9 with 16 points with Giannis as his primary defender.

That right there is a huge reason for optimism moving forward in the series. Chicago’s Big 3 all finished with 20 or more points as well, with Zach LaVine dropping 20 and Nikola Vucevic making his presence felt inside. DeRozan promised his squad would be a lot more efficient in Game 2 and he was spot on. The Bulls shot a blistering 48% from beyond the arc and nearly 50% from the field.

This was truly one of the best defensive performances from Donovan’s group in quite some time. Alex Caruso shined, making numerous huge plays and just hounding the Bucks, registering two steals and forcing several turnovers, never mind his nine points and 10 dimes. With the series tied 1-1 and Milwaukee down Middleton, the Bulls should have all the confidence in the world heading back home. Their record at the United Center is brilliant too, going 27-14.

Call me crazy but I’m riding with the home squad here. They just played fantastically and the energy should be electric in the Windy City. I won’t say Chicago will beat the Bucks in the series, but a Game 3 win is going to happen.  Milwaukee could take time to adjust without Middleton. Expect another solid all-around showing from the Bulls.