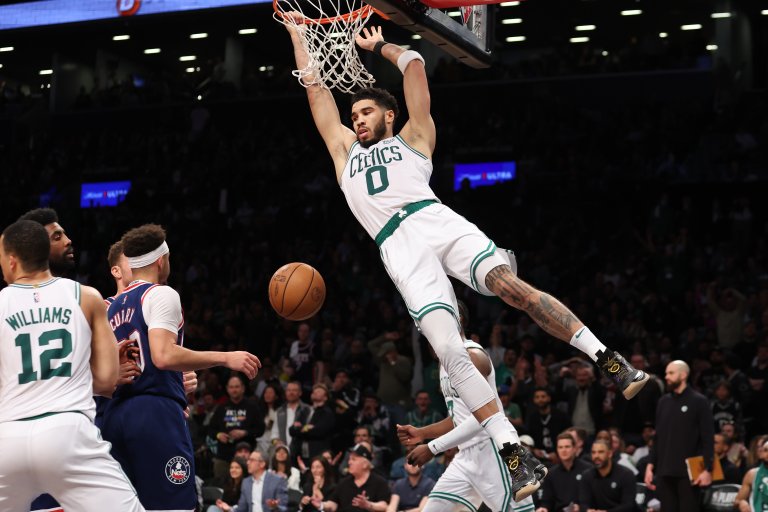 Apr 25, 2022; Brooklyn, New York, USA; Boston Celtics forward Jayson Tatum (0) hangs on the rim after dunking over Brooklyn Nets guard Seth Curry (30) during the fourth quarter of game four of the first round of the 2022 NBA playoffs at Barclays Center. The Celtics defeated the Nets 116-112 to win the best of seven series 4-0. Mandatory Credit: Brad Penner-USA TODAY Sports

The Bucks and Celtics begin their second-round series on Sunday
Boston is a 4.5-point favorite for Game 1
Find the Bucks vs Celtics odds, spread, analysis, and prediction below

In what is expected to be one of the most exciting conference semifinals of the lot, the Milwaukee Bucks and Boston Celtics officially begin their second-round series on Sunday afternoon at the TD Garden. The tip-off is scheduled for 1pm ET. Keep reading for the Bucks vs Celtics odds.

Milwaukee rolled past the Chicago Bulls in five games in the opening round, despite losing Khris Middleton to a knee injury. Unfortunately, he’ll be out this entire series as well. As for the C’s, they’re coming in brimful of confidence, having wiped the floor with Kevin Durant and the Brooklyn Nets in a clean sweep.

Odds as of April 30th at FanDuel.

Boston is a 4.5-point home favorite for the series opener and went 2-2 against the Bucks during the regular season. However, Milwaukee did win the last two games, with both ending within six points or less.

By no surprise, the defending champions took care of Chicago in convincing fashion, even sans Middleton. Their experience and depth proved to be far too much for the Bulls but Milwaukee will have a much taller task in the Eastern Conference semifinals against a Celtics team that is red-hot.

Giannis Antetokounmpo did his thing in the first round, averaging 28.6 points, 13.4 rebounds, and 6.2 assists while shooting nearly 57% from the field. The man sitting third in the NBA MVP odds will undoubtedly be the main man Boston will be looking to stop, but there are others who must step up and deliver, most notably Jrue Holiday. His stout perimeter defending is going to be crucial versus the C’s as he looks to contain Jayson Tatum and Jaylen Brown, who both showed out in the Nets series.

Giannis Antetokounmpo in the first round:

Best player in the world? 👀🔥 pic.twitter.com/2EcHf91CTX

Offensively, Holiday put up respectable numbers in the conference quarterfinals, posting a stat line of 16.4 points, 6.8 assists, and five rebounds. However, he shot just 34% from long range and certainly has a bigger load on his shoulders with Middleton unavailable. His play on both ends of the floor must be as consistent as ever.

It will also be interesting to see how Bobby Portis and Brook Lopez fare against the Celtics’ physical frontcourt of Robert Williams and Al Horford. You can’t forget Grayson Allen either, who was lights out from the three-point line in the first round. No Middleton means one less shooter, so the Bucks need to keep finding Allen clean looks.

It wouldn’t be totally out of line to say that Boston could very well win a title this season with the way they’re playing. But, in order to do so, Ime Udoka’s group needs to get past the champs themselves. If there is one team who believes that is possible though, it’s the Celtics.

Tatum and Co. not only beat the Nets, but they embarrassed them. The C’s did a phenomenal job shutting down both Kevin Durant and Kyrie Irving, who easily had one of the worst series of their playoff careers. Aside from dropping 39 in Game 4, KD was practically non-existent, with Boston’s in-your-face defense making his life a living hell.

Jayson Tatum in the 1st Round:

On the other end of the floor, Tatum truly carried the load, averaging 29.5 points, 7.3 boards, and 4.5 boards on a stellar 42% clip from beyond the arc. The supporting cast also played well, with the likes of Marcus Smart, Payton Pritchard, and Derrick White among others, starting to knock down shots.

The key to this entire series for Boston though is to stop Antetokounmpo. Sure, they managed to stifle KD, but the Greek Freak’s physicality is on another level. If the Celtics can somehow contain him, you’ll see them advance.

I’m going to take the Celtics here. They’re riding a high right now and their defense will do just enough to slow down Giannis in the series opener, especially with the home crowd behind them. I expect the Bucks to bounce back in Game 2 and make the necessary adjustments, but the series opener is Boston’s for the taking.