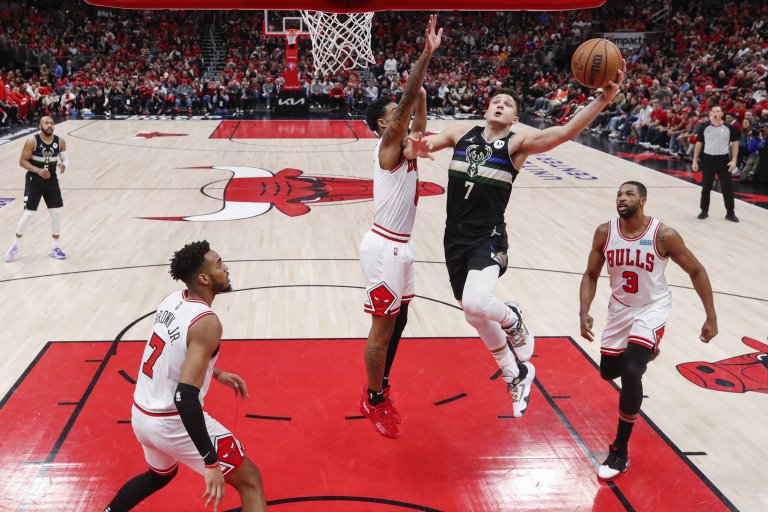 Apr 22, 2022; Chicago, Illinois, USA; Milwaukee Bucks guard Grayson Allen (7) goes to the basket against Chicago Bulls during the second half of game three of the first round for the 2022 NBA playoffs at United Center. Mandatory Credit: Kamil Krzaczynski-USA TODAY Sports

The defending champion Milwaukee Bucks are 4.5-point favorites for Sunday’s Game 4 against the Chicago Bulls. Milwaukee has a 2-1 lead in the series after their demolition of the Bulls on Friday night. Khris Middleton’s absence didn’t have much of an impact on the Bucks as their defense locked up the Bulls with Chicago shooting under 40% from three.

DeMar DeRozan and Zach LaVine combined for just four points more than Grayson Allen scored on his own. The much-maligned Bulls defense was unable to slow down Milwaukee’s offense with Jrue Holiday and Giannis Antetokounmpo able to attack and makes plays for others at will.

Odds as of Apr 23 at FanDuel Sportsbook

After being favored by 3.5 in Game 3, the line has moved towards Milwaukee following their 30-point win. The reigning champions are priced at -194 on the moneyline with the Bulls at +162 to even the series up on Sunday.

The offense was poor for the Bulls in Game 3 — 81 points cannot win a playoff game in 2022. The concerns about the Bulls’ defense in this matchup have come to fruition too, however. While Giannis Antetokounmpo was held to just 18 points and 12 shots, and Jrue Holiday only scored 16, Chicago’s defensive effort was inconsistent at best and their personnel forces them into difficult decisions on that end of the floor.

No Bull has even a chance when matched with Antetokounmpo. Of course, only a few players across the league do, but the way the Bulls have to send early help or double the two-time MVP makes it easy for Milwaukee to get good looks. He’s too good as a playmaker not to take advantage. When left in a one-on-one matchup, Antetokounmpo was getting whatever he wanted. It was hard to watch Nikola Vucevic get left on an island against the Greek Freak.

Ultimately, Alex Caruso can only do so much on the defensive end. Chicago needs its offense to perform at an almost peak level to compensate for the easy buckets that Milwaukee can get. Shooters were too frequently left open in Game 3 — the Bulls were lucky Milwaukee only shot 36.6% from downtown.

ShotQuality.com had Milwaukee as winners 83% of the time based on their looks in Game 3. The Bulls were ice-cold from three, making just nine on 34 attempts, but the blowout nature of the win wasn’t just about making or missing threes. Milwaukee missed plenty of hittable shots.

After generating 36 turnovers across the first two games, Chicago got the Bucks to cough it up just eight times before the bench mobs came in for the fourth quarter of Game 3. Mike Budenholzer made the call to go big in Middleton’s absence, putting Bobby Portis into the starting line up. Portis grabbed 16 boards and drained four threes, adding to the Bucks’ advantage on the glass.

Chicago was unable to punish Milwaukee for going big with both DeMar DeRozan and Zach LaVine struggling horribly from the field. While the duo should be more efficient in Game 4, the Bulls have a huge gap to make up for if they are outrebounded and cannot force turnovers. Milwaukee’s half court defense is too good if they replicate their Game 3 performance.

Billy Donovan forced the ball out of Antetokounmpo’s hands in Game 3. It’s a strategy the Bulls have to persevere with, but it leaves them so vulnerable to Milwaukee’s role players knocking down shots. Their offense was lost against the swarming Bucks defense at the other end of the floor.

While Milwaukee picked up a win even with Middleton out and Antetokounmpo and Holiday being relatively quiet, the Bulls have no such luxury. They are wholly dependent on DeRozan and/or LaVine having a big night.

The way Milwaukee defended in Game 3 makes it hard to see a repeat of DeRozan’s Game 2 gem. The Bucks are a good bet to take a commanding lead on Sunday — they are the superior team despite Middleton’s injury.