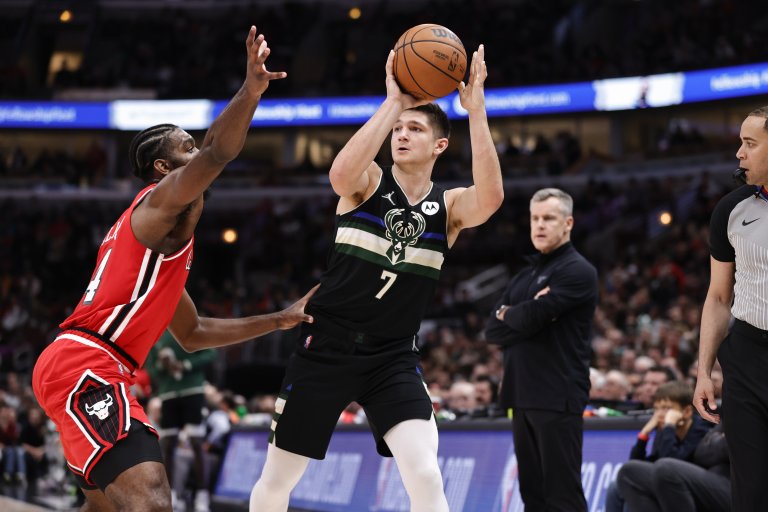 The Bucks will try to finish off the Chicago Bulls when the teams meet in Game 5 of their Eastern Conference first-round series at 7:30 p.m. ET Wednesday at the Fiserv Forum in Milwaukee.

Odds as of April 26th at FanDuel

In a game that will be televised by TNT, the Bucks are 12-point favorites. They have an implied win probability of 89.47% based on being -850 picks on the moneyline.

The Bulls could be without All-Star guard Zach LaVine, who was placed in the health and safety protocols Tuesday.

LaVine scored a game-high 24 points Sunday and had 13 assists and five rebounds. He averaged 24.4 points during the regular season, though that figure has dipped to 19.3 in the first playoff series of his eight-year career.

The Bulls are 9-6 this season without LaVine, who had knee problems during the regular season.

Only once in the first four games of this series have the Bulls even reached 100 points. They have also shot 27% or worse from beyond the arc in three games.

Alex Caruso left the game in the second quarter and did not return after being inadvertently hit in face by Jevon Carter. Caruso was still in the concussion protocol Tuesday and his status for Game 5 in questionable.

It’s hard to describe just how good he was across the court in Game 2. The defense (per usual) was tremendous. Ridiculously good hands and insane awareness to draw those charges.

Simply one of the smartest and most precise defenders in the NBA. pic.twitter.com/fGIGaw0oiP

If LaVine and Caruso are both out, look for Coby White and Ayo Dosunmu to run the offense. White is averaging 6.3 points in this series and Dosunmu just 3.0.

Matt Thomas (lower leg) has been ruled out. Lonzo Ball (knee) is done for the season.

Grayson Allen was lights out in Game 4 for the Bucks, scoring 27 points while shooting 10-of-12 from the field, including 6 of 7 from three-point range. He set career playoff bests for points and threes.

Over the last two games, Allen is 18 for 24 and 11 for 14 after scoring a total of three points in the first two games before All-Star forward Khris Middleton was injured. The Bucks outscored the Bulls by a whopping 54 points in those games, both on the road.

Grayson Allen (49 points) has outscored every single player on the Bulls in the last 2 games. pic.twitter.com/JP52llbjHS

Bobby Portis had a double-double with 14 points and 10 rebounds. He started for the second straight game in place of Middleton, who is expected to miss the rest of the series after sustaining a sprained left knee in Game 2.

Portis playing through an eye abrasion that he suffered in Game 2.

The #Bucks are undefeated in franchise history when Bobby Portis wears goggles winning by an average of 30.0 points per game. pic.twitter.com/rKns6LjGzj

George Hill (abdominal strain) will miss his sixth straight game. Luca Vildoaz (illness) missed Game 4 but should be available Wednesday after the Argentinian made his NBA debut in Game 3 by playing eight minutes of the bench.

The Bucks, who are fifth in the NBA Championship odds picture, have seized control of the series after losing Game 2 at home. Furthermore, Milwaukee has won 19 of its last 21 meetings with the Bulls, including all four regular season meetings in 2021-22.

It is hard to buck that kind of momentum and history in this spot even with a double-digit spread. The Bucks are clearly a cut above Chicago.