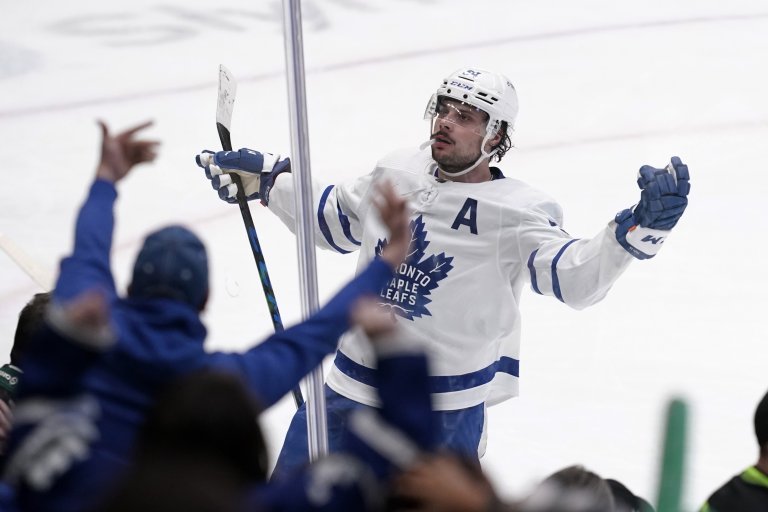 The Montreal Canadiens and Toronto Maple Leafs faceoff on Saturday, April 9th
The Maple Leafs are listed as huge home favorites in the Saturday NHL odds
Read below for Canadiens vs Leafs odds, picks and predictions

The Maple Leafs are listed as very heavy home favorites in the Saturday NHL odds. The total is set at 6.5 for a game that features the NHL’s leading goalscorer in Auston Matthews.

Let’s take a look at the Canadiens vs Leafs odds and offer you our NHL best bet.

Odds as of April 8 at Caesars Sportsbook

Ontario online sports betting markets list the Leafs at +104 odds on the puckline, while the Canadiens are -125 to keep the game within three goals. Toronto’s heavy -430 moneyline price means they have 81.13% implied probability to win.

The Maple Leafs are heavily favored to beat the Canadiens in the Saturday NHL odds. Toronto is  6-0-1 in their past seven games after a 4-3 overtime win over Dallas on Thursday. Auston Matthews netted his 55th and 56th goals to set the Maple Leafs’ single-season record. Matthews is also dominating the Rocket Richard odds.

Toronto has been one of the NHL’s best home teams this season, posting a 25-7-2 record at Scotiabank Arena. One of those victories was a 2-1 win over the Habs in their season opener back in October. The home team has won four of the past five meetings in this rivalry.

ARE YOU NOT ENTERTAINED?!?!? pic.twitter.com/wC9Yh0uGap

The Leafs are being carried by the dynamic duo of Matthews and Mitch Marner. Matthews has scored 49 goals in his past 49 games, while Mitch Marner is riding a 12-game point streak in which he’s recorded eight goals and 19 assists.

Toronto has the second-highest scoring offense in the NHL, but their defense and goaltending is still shaky. Saturday’s projected starting NHL goalie is Jack Campbell, who has allowed 12 goals in four starts since returning from injury.

The Canadiens are listed as +330 road underdogs versus Toronto, which gives them only 23.2% implied probability to win. The Habs started strong under new coach Martin St. Louis, but are only 4-5-3 in their past 12 games.

Montreal is coming off a solid 7-4 road victory over New Jersey in which they took advantage of some very poor goaltending. Despite the win, Montreal still owns a lackluster 10-20-7 road record. That’s part of why the Habs have already been eliminated from playoff contention.

The Canadiens rank bottom-five in the NHL in both offense and defense. Their power play is second-last at 13.7% efficiency, which is an issue going up against Toronto’s top-ranked PP unit.

Nick Suzuki leads the Habs in scoring with 53 points, while Cole Caufield has 16 goals in 26 games since St. Louis took over as coach. Caufield is someone to watch, as the sniper has scored four times in seven career games vs Toronto.

Montreal’s projected starting goalie for Saturday is Jake Allen, who is 9-20-4 with a .904 save percentage and 3.29 GAA. Defenseman Jeff Petry could return to the lineup versus Toronto after missing seven games with a lower-body injury.

The Canadiens may be eliminated from playoff contention, but they are sure to be amped for their final meeting with Toronto. Although the Leafs won the last time these teams  faced off at Scotiabank Arena, the Habs took the other two meetings in Montreal.

Aside from recent history, everything points to Toronto in this matchup. They have the league’s hottest goal scorer and much better advanced metrics. Over the past month, the Leafs rank top-10 in corsi and high-danger chances, while the Habs rank bottom-five for both.

Here are some betting trends to note for Canadiens vs Leafs:

Canadiens vs Leafs should be another high-scoring matchup at Scotiabank Arena. Both teams feature talented snipers and netminders not playing with confidence. Look for the Matthews and Suzuki lines respectively, to light the lamp several times Saturday.

Bet Over 6.5 goals in the Saturday NHL odds at Caesars Sportsbook.