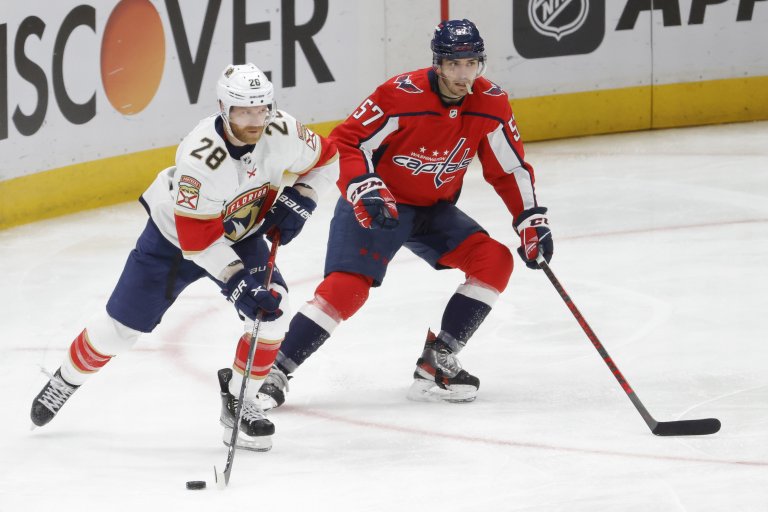 May 9, 2022; Washington, District of Columbia, USA; Florida Panthers right wing Claude Giroux (28) skates with the puck as Washington Capitals defenseman Trevor van Riemsdyk (57) defends in the third period in game four of the first round of the 2022 Stanley Cup Playoffs at Capital One Arena. Mandatory Credit: Geoff Burke-USA TODAY Sports

The Washington Capitals vs Florida Panthers first-round playoff series is tied 2-2 heading into Game 5 on Wednesday, May 11th. Puck drop is 7:30 PM EST at FLA Live Arena. ESPN2 will carry the broadcast.

Florida is listed as heavy home favorites in the Game 5 Capitals vs Panthers odds. The total is set at 6.5, while the spread lists Florida at -1.5 on the puckline.

Let’s take a look at the Capitals vs Panthers odds and offer you our NHL best bet for Game 5.

Odds as of May 10th at Barstool Sportsbook.

With the series tied 2-2, Florida is listed as heavy -230 favorites in the Capitals vs Panthers series odds to advance onto Round 2. The Cats are also priced at +650 in the 2022 Stanley Cup odds.

The Panthers evened their playoff series with the Capitals thanks to a 3-2 overtime win in Game 4 on Monday. Sam Reinhart scored late in the third period to force overtime, while Carter Verhaeghe netted the winner 4:57 into extra time.

Florida’s Game 4 performance was exactly the type of outing the Panthers needed to swing the series momentum in their favor. While Andrew Brunette’s team trailed 2-1 in the third period, the Panthers outshot the Capitals 32-16 on the night.

Carter Verhaeghe wins it for the Comeback Cats 🚨 pic.twitter.com/XnlpC7Ql9v

The advanced metrics backup Florida’s strong play in the series to date. While one might expect the Presidents’ Trophy winner to be up in the series at this point, they do have a 57.11 CF% through four games compared to Washington’s 42.89 CF%.

Florida has the clear edge in puck possession, but Washington has the edge in special teams. The Panthers’ lethal power play has somehow gone 0-for-12 in the playoffs while the Capitals have striked five times with their man advantage.

One player that could certainly impact the Game 5 Capitals vs Panthers betting line and spread is Washington power forward Tom Wilson. The 28-year-old hasn’t played in the series since suffering a lower-body injury in Game 1.

The latest Tom Wilson injury update is that he traveled with the team to Florida and is questionable to play in Game 5. Although he’s making the trip to Sunrise, Wilson is still being classified as “day-to-day”. Wilson didn’t practice with the team Tuesday.

Wilson returning in Game 5 would be a huge boost to the Capitals’ offense. Not only did the winger set a career high with 24 goals in the regular season, but he also uses his physicality to provide energy to the team.

There are some betting trends to note when making a wager on Capitals vs Panthers. Florida is an incredibly dominant home team, posting a 47-11 record in their last 58 games at FLA Live Arena. The Panthers are also 45-8 in their last 53 games as a home favorite.

Looks like @flalivearena is ready for the #StanleyCup Playoffs 😼 pic.twitter.com/s8h7GqMPbv

The Capitals, meanwhile, are 2-6 in their last 8 playoff games as an underdog. Peter Laviolette’s team also tends to struggle in Florida, as they’ve posted a 2-5 record in the last seven meetings played at FLA Live Arena.

When it comes to head-to-head trends, the game total is something to note. The “over” has cashed in nine of the past 12 meetings. There’s also a big edge to the favored team, as the underdog is only 19-39 in the last 58 meetings.

The betting line and spread for Game 5 Capitals vs Panthers paints a clear picture of who the oddsmakers like to win. Florida has grabbed the momentum in the series and are heading home to a building they only lost seven times in during the regular season.

Florida’s struggling power play would be more of a concern if it didn’t directly contract its performance in the regular season. The Panthers had the fifth-best power play percentage (24.4%) this year, so it’s likely only a matter of time before they figure things out.

The Panthers should build off their Game 4 performance and handle the Caps at home in Game 5. They’ve controlled the play in the series so far and have have performed well in this building against Washington in the past.

After requiring overtime in Game 4 despite holding a major shot edge, look for the Panthers to win Game 5 in regulation. Bet the Florida three-way line at Barstool Sportsbook (-132) in the Wednesday NHL odds.