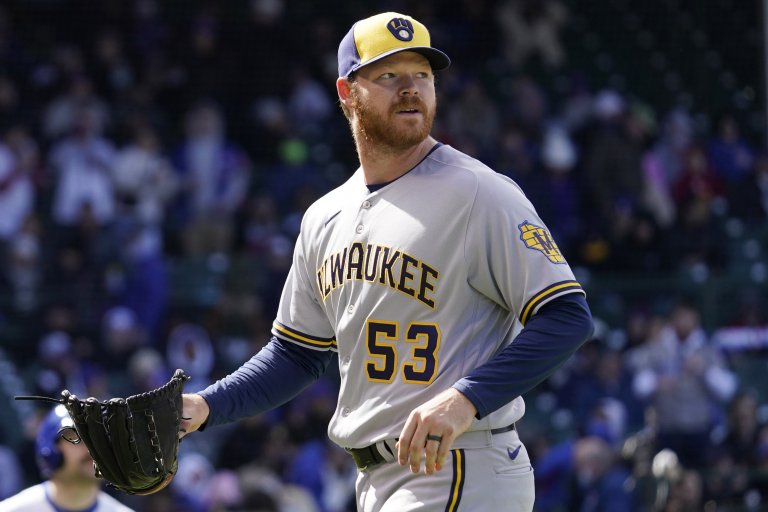 Milwaukee Brewers starting pitcher Brandon Woodruff looks at the score board as he leaves the field during the fourth inning of a baseball game against the Chicago Cubs in Chicago, Saturday, April 9, 2022. (AP Photo/Nam Y. Huh)

The Milwaukee Brewers are -159 home favorites over the St. Louis Cardinals on Thursday.
Adam Wainwright (1-0, 0.00) will start for the Cardinals against Brandon Woodruff (0-1, 17.18)
A look at the Cardinals vs Brewers odds can be found below with a prediction

The Milwaukee Brewers open the home portion of their schedule when they face the St. Louis Cardinals at 5:14 p.m. ET Thursday to begin a four-game series at American Family Field.

The Brewers (3-3/0-0 home) are coming off back-to-back wins for the first time this season as they beat the Baltimore Orioles 4-2 on Wednesday night. The Cardinals (3-1/0-0 road) were rained out Wednesday against Kansas City after beating the Royals 6-5 on Tuesday in St. Louis.

Odds as of April 13th at Barstool Sportsbook.

The Brewers are -159 favorites, giving them an implied win probability of 61.39%. Both teams harbor championship aspirations as the Brewers have +1400 World Series odds and the Cardinals’ odds are +2500.

Adam Wainwright (1-0, 0.00) will start for the Cardinals against Brandon Woodruff (0-1, 17.18). Both pitchers will be taking their second rotation turns of the season.

Wainwright pitched six shutout innings to beat the Pittsburgh Pirates at St. Louis last Thursday on opening day. He allowed five hits, did not walk a batter, and had six strikeouts.

Making his first road start of the season, Wainwright was 8-2 with a 3.58 ERA away from home in 13 outings last season.

Brewers leadoff man Kolten Wong is 3 for 10 with two doubles against his former St. Louis teammates. Willy Adames is 1 for 8 with three strikeouts versus Wainwright.

Woodruff had a rough season debut last Friday against the Cubs in Chicago as he took the loss. He was hammered for seven hits and six runs in 3.2 innings while waling three and striking out two.

Brandon Woodruff is pumped to start the Brewers’ home opener. “The crowd is so energetic and it feels like postseason baseball,” he said. pic.twitter.com/edcfs1Ylfv

Kolten Wong’s run-scoring triple in a two-run ninth proved to be the difference for the Brewers om Wednesday night in Baltimore.

The Orioles scored twice in the eighth off Devin Williams to tie the game at 2-2. The Brewers responded with Wong’s hit the bottom of the ninth. He scored on Rowdy Tellez’s double.

Josh Hader pitched a scoreless ninth and has saved each of Milwaukee’s three wins this season.

Albert Pujols stole the show in the Cardinals’ win over the Royals on Tuesday nigh with his first home run since returning to St. Louis as a free agent March 28. He played for the Cardinals from 2001-11 and helped them win two World Series.

His first home run for the Cardinals since the 2011 World Series!

Andrew Knizner blasted a three-run home run for the Cardinals. Nolan Arenado added a solo shot and is hitting .438 with nine RBIs and NL MVP odds of +2500.

The teams are meeting for the first time this season after the Cardinals won 11 of 19 meetings last year as Arenado hit .286 (19 for 67) with four doubles, five home runs and 14 RBIs.

The series has been tight since the start of the 2017 season. The Brewers hold a slight 44-42 edge in that span.

Brewers third baseman Luis Urias (quad) and is being replaced primarily by Jace Peterson. That could hurt against Wainwright as Urias is 4 for 8 lifetime off the veteran right-hander and Peterson is 3 for 17 (.177).

Woodruff has been selected to the last two All-Star Games and is tough to fade. However, the 40-year-old Wainwright keeps chugging along and is an enticing underdog play.