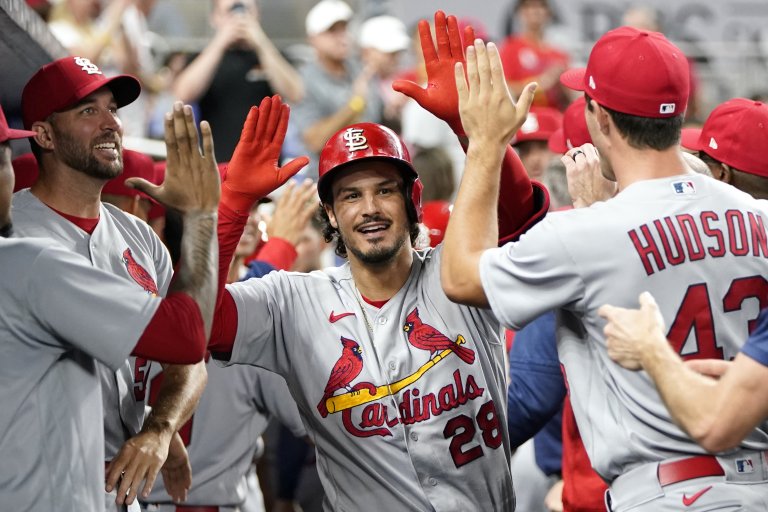 St. Louis Cardinals’ Nolan Arenado (28) is congratulated in the dugout after hitting a solo home run during the ninth inning of a baseball game against the Miami Marlins, Wednesday, April 20, 2022, in Miami. The Cardinals won 2-0. (AP Photo/Lynne Sladky)

The Cincinnati Reds are baseball’s punching bag so far this year. Cincinnati has dropped nine straight, their longest skid in nine years, and have won just two of their first 13 games.

Life won’t get any easier on Friday for the Reds, as they’ll welcome the NL Central leading St. Louis Cardinals to town for a three-game set.

Odds as of April 21st at Caesars Sportsbook.

The Cardinals opened up as -135 moneyline favorites, in a contest that features a total of 9 runs. First pitch is scheduled for 6:40pm ET at the Great American Ball Park, with clear skies and 73 degree temperatures in the forecast.

Let’s not kid ourselves though, Cincy’s abysmal 2022 outlook was easy to spot. They projected for the fifth fewest victories in the MLB win totals, and it will be up to rookie Hunter Greene and his 100mph fastball to stop the bleeding on Friday.

The 22-year-old fireballer has been the lone bright spot in the Cincy rotation, posting a 1-1 record and leading their starters in ERA and WHIP. His introduction to the big leagues was consecutive starts against the Braves and Dodgers, two of the leading candidates in the World Series odds, and he’s handled himself nicely.

St. Louis meanwhile, will counter with Steven Matz. The lefty was shelled by Pittsburgh of all teams in his season debut, but bounced back with a sparkling start in his second outing.

Now *that’s* what the Cardinals had in mind when they signed Steven Matz.

Matz departs after 5 2/3 with a runner on and two out. He whiffed six with 51 of his 77 pitches going for strikes, and he had exceptional command on his sinker.

Ryan Helsley gets the call in relief.

Matz pitched 5.2 innings of shutout ball against the Brewers, scattering only three hits and striking out six. The 30-year-old is fresh off a career-best 14 win season in 2021 with Toronto, posting his lowest ERA since his rookie season.

Matz has minimal history with this version of the Reds lineup, but one matchup to watch out for is him versus Tommy Pham. Cincy’s left fielder is off to an extremely slow start in 2022, but is 4-for-5 lifetime against Matz with a home run and two RBI.

Pham certainly isn’t the only Reds batter that is ice cold. The team ranks 28th in runs per game, 29th in batting average, and dead last in OBP, slugging and OPS. They don’t feature a single batter with more than two home runs or six RBI, while only two regulars have an average north of .267.

The Cardinals on the other hand, entered play on Thursday averaging 5.0 runs per game, which ranked fifth in baseball. They had hit the six most home runs, and ranked sixth overall in OPS.

Nolan Arenado and Tommy Edman have been responsible for most of the offensive damage, as the duo has combined for eight home runs and 21 RBI, while batting .368 and .371 respectively. Arenado, a top-six contender in the NL MVP odds, absolutely destroyed Cincy pitching last season, batting .347 with 15 runs, five homers and 17 RBI in 75 at-bats.

It’s been a challenge for Reds games to exceed totals this season because they simply haven’t been able to score enough to do their part. Sure, they allow the second more runs per game, but when you only average 2.85 runs per contest yourself games are going to stay low scoring most of the time.

As a result, four of their past six contests have fallen short of the total. I like that trend to continue on Friday given that Green, their best pitcher so far, is on the hill and the fact that runs have been so hard to come by for their offense.

Four of the Cardinals last five games meanwhile, have stayed under the number and St. Louis is only one of seven clubs with a team ERA below 3.00.