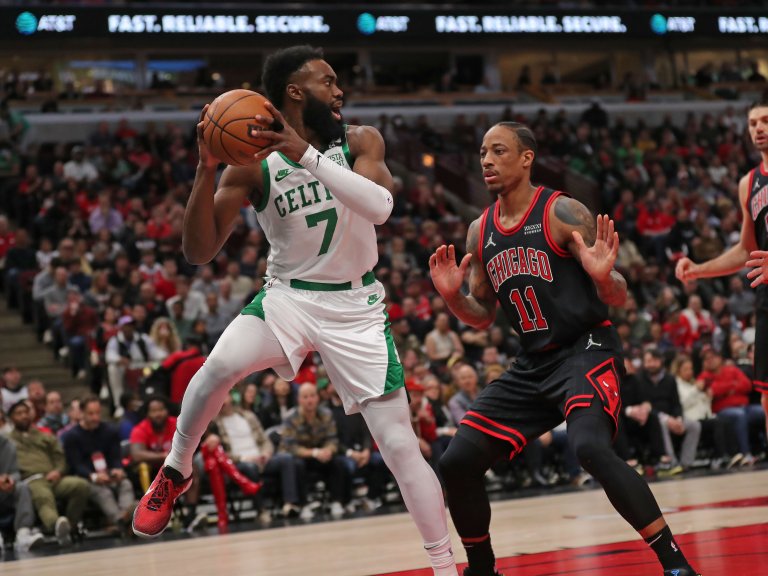 Surging Celtics look to hold down second in the East when they visit the Bucks
Milwaukee trails Boston by a half-game in the standings
Find the odds, lines, preview, and betting prediction below

If the Boston Celtics want to keep tabs on that 2-seed in the East, they’re going to have to do it on the road.

After taking care of business Wednesday night in a demolition of the Bulls, they’ll visit the defending champs in Milwaukee in the second half of a back-to-back.

The Bucks are currently in the three spot, just a half-game behind Boston.

With potential for stars resting on both sides, oddsmakers have pegged the Bucks as 5.5-point favorites Thursday night. It all gets underway at Fiserv Forum at 7:30pm ET, in a game that can be seen live on TNT.

Odds as of April 6 at Caesars Sportsbook

Talking about finishing the season with a flourish.

Boston laid the wood to the Bulls in Chicago, drilling them 117-94, to mark their third straight win after a mini two-game skid.

Jaylen Brown really has a different type of bag.

Whereas much of this run has been built on the strength of their young wing stars Jayson Tatum and Jaylen Brown, this game was a balanced attack. Four players topped double-digits by half, as the C’s built a 67-51 halftime lead and were ever challenged the rest of the way.

Brown led the way with 25 points, seven boards four dimes and four steals, while Tatum had 16 points, 10 rebounds and eight assists. Sharing is a huge part of Boston’s success: they improve to 19-1 when registering 15 or more assists in the first half.

In their last 30 games, the Celtics are a blistering 25-5 and now own the third best odds to win the Eastern Conference.

They’ve shot up all the defensive charts during this surge, now leading the NBA in scoring defense at 104.3 points pre game and field goal shooting defense, holding teams to 43.4% from the field.

From defense to offense

Al Horford blocks and Jaylen Brown with the finish 😤pic.twitter.com/silrQqKadF

They’re also second-best in the league at defending the arc, with opponents shooting just 33.9%.

The C’s are still missing big man Robert Williams III (knee) and he won’t be back until at least May, which means Boston would need to win a playoff series or two for Time Lord to suit up again this year.

We’re pretty sure that seeding doesn’t matter for the Bucks: this is a team that won the title as a 3-seed a season ago. They’ve yo-yo’d the home stretch of the schedule between staying sharp and making sure Giannis Antetokounmpo is getting the requisite rest needed for his knees.

Highlights from the win over the Chicago Bulls. ⬇ #FearTheDeer pic.twitter.com/AroZ3Y4ff8

After sitting out a blowout loss to the Clippers, Giannis, a top-3 candidate in the 2022 NBA MVP odds, has played the last two games. He played 40 minutes and went for 28 points and 10 boards in a loss to the Mavericks.

Last time out, he logged just 24 minutes, potting 18 points, nine rebounds and seven dimes in a 127-100 evisceration of the Bulls.

Brook Lopez led the team in scoring with 28 points and seven boards, as every Milwaukee starter and seven players in total scored in double figures. Jrue Holiday added 11 points and 13 assists.

Milwaukee’s scoring defense has sagged this year, surrendering 111.9 points per game, good for 18th in the NBA. Fortunately, they pump in 115.2 points per game, which is ranked third overall, and they’re a top-5 three-point shooting team, hitting at a 36.6% clip.

Giannis is listed as a game-time decision Thursday, as his guard Grayson Allen (hip).

This will be the fourth and final meeting between these two teams, but they haven’t played since Christmas, when the Bucks snapped a two-game head-to-head skid with a 117-113 win.

That’s the second-best win total in the conference, and they’ve ripped off nine straight wins against East foes, going 8-1 ATS.

Milwaukee has struggled at home for bettors, just 16-24 ATS on the season. Only four teams have a worse betting mark this year.

There’s the possibility that Ime Udoka rests some players like he did in the back end of their last back-to-back set.  Brown, Tatum and Al Horford all sat in a OT loss to the Raptors on March 28.

Because there was minimal stress in this blowout win, perhaps they’re in the lineup in this high-stakes battle. Based on that assumption, I see this game going over the for the third time in their four meetings this year.