CoinPoker, one of the leading crypto-currency poker rooms on the internet, has stopped offering sports betting as one of its services. Because it has never dabbled in casino games like slots or roulette, CoinPoker now has only one product division remaining: a peer-to-peer poker room. It seems as though CoinPoker has come full circle, having initially joined the field of online poker sites, rather than sportsbooks, in 2017 and now apparently returning back to its roots. 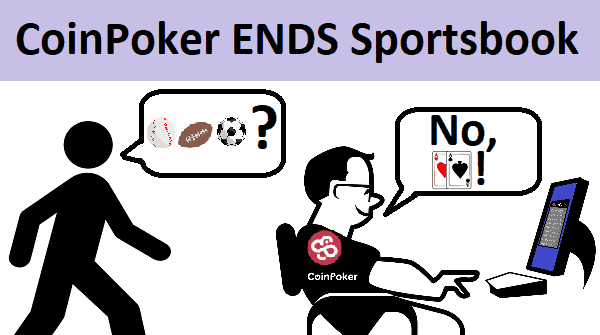 About the CoinPoker Sportsbook

CoinPoker excitedly added a sportsbook to its poker room in January 2020. It offered more than 15 sports to bet on and allowed both pre-match and live, in-play wagering. Over the next couple of years, it saw several improvements. The addition of a mobile sports app and a major sportsbook redesign in April 2021 were a couple of the enhancements that CoinPoker made to its sports division.

Despite the resources invested in the sportsbook and the fact that it appeared to be popular with the user base, CoinPoker removed its sportsbook on March 7, 2022. No major announcement of this development was made at that time.

Why Close the Sportsbook?

Once we heard that CoinPoker decided to end its sports betting operations, we were left a little bit puzzled. The sportsbook had been going strong for more than two years, and from what we understood, it was popular with customers.

We reached out to Coin Poker for an explanation. We received a response from CoinPoker management, which said:

If you look at our brand name, it’s coinPOKER, not coinSPORTS. It was making money, but it was more trouble than it was really worth to manage…We’re a poker room, not a sports book, and it was a bit of a distraction from the real goal of being the undisputed #1 crypto poker network.

Given all the legwork involved in choosing what contests to carry, adjusting the lines as betting money flows in, and resolving disputes with bettors involving obscure sportsbook rules, we can heartily appreciate CoinPoker’s assertion that “it was more trouble than it was really worth to manage.” It’s also likely that allowing sports betting put CoinPoker in a precarious legal position in various jurisdictions. Although CoinPoker is open to all countries around the world, the sportsbook was not accessible to users from the United States, possibly for legal reasons.

Ever since CoinPoker started offering real money tables in early 2018, the platform has seen many changes. These adjustments have affected both the games being spread and the entire financial underpinning of the site.

When it first began, CoinPoker relied heavily on its proprietary CHP crypto token, denominating all tables in this currency. This led to wariness and confusion among players because CHP was not widely available on exchanges, and it experienced wild price fluctuations at times. It’s no wonder then that the room remained a niche operation with a small player base.

In October 2020, Coin Poker decided to run its games in USDT (Tether) and to also hold the majority of player balances in this coin as well. Deposits and withdrawals are conducted in Tether, Bitcoin, Ethereum, and several other cryptos. Old-school fiat currency is not used at all. Because Tether is widely traded outside CoinPoker and is pegged to the U.S. dollar, users enjoy stability in the value of their balances and can redeem them for actual dollar funds much more easily. Nowadays, the in-house CHP token is used to incentivize loyal customers with rakeback and other benefits, but it’s not necessary to hold a large balance of CHP to play.

If CoinPoker’s ultimate goal is to become the “#1 crypto poker network,” as stated by the management representative we contacted, then it appears to be well on its way. Its current traffic level of 110 average cash game players (as reported by online poker tracking firm GameIntel) makes it about three times the size of SwCPoker, which is its nearest competitor for player traffic among crypto-only internet poker sites.

What Improvements Could We See?

Now that CoinPoker has elected to abandon its sportsbook to focus more clearly on poker, we imagine that we will likely see some enhancements to its cardroom. While it’s impossible to say for certain what the future has in store, here are a few improvements that we would like to see:

Sit n’ Go tournaments: The only type of SNG gaming offered by CoinPoker currently is lottery-inspired Cosmic Spins. There used to be traditional sit-and-goes in the lobby, but they have been discontinued. It’s not that we’re necessarily huge fans of the single-table tournament format, but it has proliferated across the poker world and is now considered a standard game type along with cash tables and multi-table tournaments. Simply put, when newcomers to a site open the poker client, they expect to see SNGs and might be turned off if they’re absent.
Bonuses: CoinPoker has pretty low rake, especially in micro- and small-stakes games, and it’s possible to get 30% rakeback for those willing to hold a balance in the CHP token. However, history has shown that low rake by itself doesn’t attract newcomers to the tables. A first deposit bonus, which CoinPoker lacks, along with a system of missions/challenges and perhaps a loyalty program would do wonders to increase player counts in our opinion.
Monthly status updates: CoinPoker used to provide regular updates to its community via the CoinPoker blog. However, this blog has not been updated since November 2021. Now that sports betting has been removed, maybe the CoinPoker team will have the time to make new posts more frequently. We aren’t necessarily looking for huge tomes of information every 30 days, but a simple monthly rundown of recent changes, soon-to-come features, and upcoming promotions would certainly create more engagement with the community. Random-Multiplier Cosmic Spins Are the Only SNGs Offered at CoinPoker

There’s a lot more that CoinPoker could undoubtedly do to make a better product going forward, but these three things are the ones we’re most looking forward to.

Check Out CoinPoker for Yourself

CoinPoker seems to be heading in the right direction, and so now’s a fine time to open an account if you haven’t already done so. You can learn how to sign up for CoinPoker and get a ton of details about the site in this factual CoinPoker review. If you’d rather explore your other options for USA online poker, then head over to this page covering the top poker sites online for Americans.