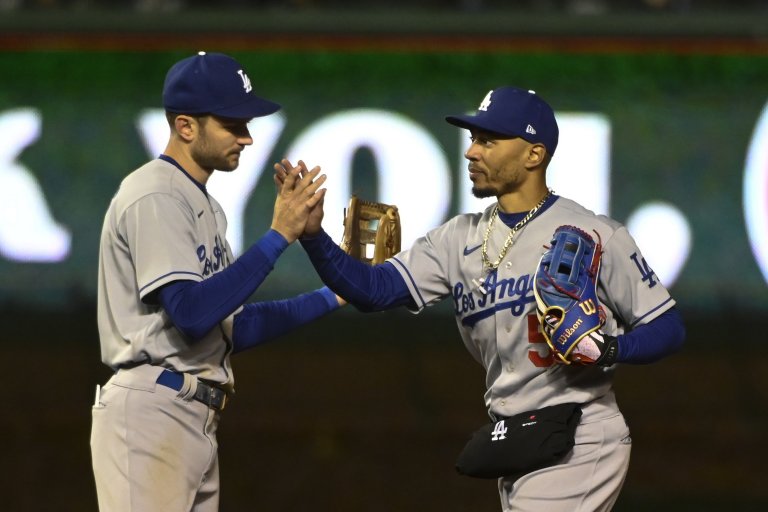 The Dodgers and Cubs meet on Sunday Night Baseball on May 8th
LA won the first two games of this series
Find the Dodgers vs Cubs odds, lines, preview, and best bet below

The Los Angeles Dodgers and Chicago Cubs wrap up their four-game set on Sunday Night Baseball, with first pitch scheduled for 7:08 PM ET. LA won both games in a doubleheader on Saturday.

It will be a thrilling matchup on the mound as Walker Buehler and Marcus Stroman go toe to toe.

Odds as of May 7th at Caesars Sportsbook.

The Dodgers are a heavy -200 favorite for the series finale and have won five in a row coming into Sunday.

Buehler has been nothing short of outstanding for Dave Roberts’ squad, truly serving as their ace. The hard-throwing righty is 3-1 with a stellar 2.12 ERA in five starts, striking out 26 hitters in 29.2 innings and walking only seven batters.

Walker Buehler in this afternoon’s win over the Detroit Tigers

Buehler is also coming off two flawless outings, throwing a complete-game shutout against the Diamondbacks on April 25th and then tossing five innings of scoreless baseball vs. Detroit last Sunday. However, the Cubs are a team that tends to hit Buehler around. He owns a 4.56 ERA against them, with their current lineup hitting .244 in 34 at-bats.

Stroman isn’t exactly off to a great start in his first year with the Cubbies. He’s compiled a 5.13 ERA and 1-3 record in five outings while allowing four homers. That being said, the former Met is trending in the right direction. Stroman notched his very first win last time out, tossing seven frames of two-hit baseball against the Brewers and walking only one batter.

The Dodgers absolutely tee off on Stroman, though, slashing .357 as a group. With the way they’re swinging it lately, this will undoubtedly be a tough task for the veteran righty. But, he does have a 2.77 ERA against LA in two career starts.

Los Angeles is rolling right now, sitting at 18-7 which is good for first place in the NL West. The Dodgers came out swinging in the first game of a doubleheader on Saturday, banging out 11 hits in a 7-0 win. Freddie Freeman went 3 for 4 with three doubles, while Trae Turner also had a pair of hits. Freeman is currently at +1200 in the NL MVP odds.

LA’s bats were quieter in the back-end of the two-game set, registering just two hits. But, Mookie Betts did all the damage, smacking a double and three-run homer. Betts is actually the most experienced hitter in the lineup against Stroman, however, he’s only hitting .216 off him.

Chicago is really struggling right now, losing four straight and looking dismal offensively. They’ve only scored six runs in their last four games. That being said, the Cubbies’ bats have actually looked alright across the board, sitting in 10th in hits and average. Their lineup is simply just struggling lately.

When in doubt, leave no doubt. pic.twitter.com/EOnI5QboLn

A total of seven players have faced Buehler in the past, with Jonathan Villar going 2 for 7 lifetime. The Chicago roster looks a lot different than the one Buehler pitched against in previous seasons, though.

Despite Stroman’s success against the Dodgers, LA is far too hot right now. I expect them to come out firing offensively while Buehler should put together another solid outing. Take the visitors on the moneyline and/or to cover the spread when it’s available.