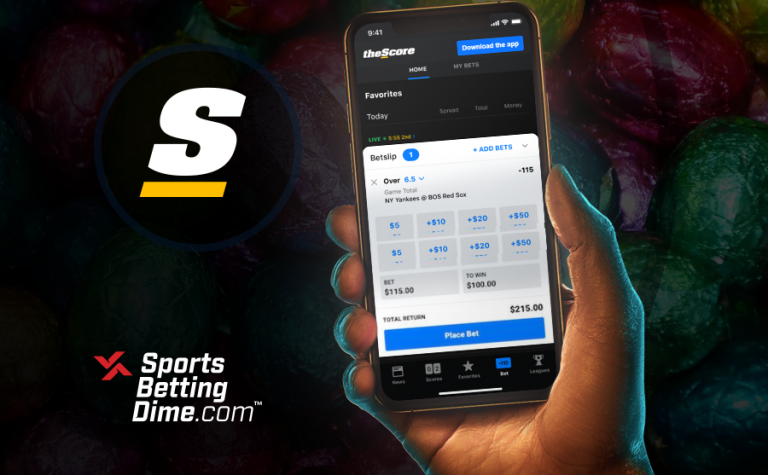 Download theScore Bet Ontario app this weekend to bet on all of your favourite Canadian teams.

theScore Bet launched in Ontario on Monday, April 4, 2022
Get the best odds for the NHL, NBA, MLB, and MLS this Easter Long weekend at theScore Bet
See how to download theScore Bet Ontario app this weekend below

If you’re looking for action this weekend on your favourite Canadian NHL, NBA, MLB and MLS teams then look no further. Download theScore Bet Ontario app for your Android or Apple device and start betting with one of the best new sportsbooks to launch in Ontario now that Canada sports betting is live!

theScore Bet has had a busy past year. Originally known as a broadcast channel, the company transitioned into being an app that provided a simple and easy-to-navigate interface for sports scores and news across all the major sports.

A sale to Penn National Gaming last summer opened the door for the company to make a splash in the sports betting and iGaming markets. theScore Bet was already operating in Colorado, Iowa, Indiana, and New Jersey, and once Canada launched legalized sports betting in Ontario, the app went live in Ontario as of April 4.

The good news has continued to flow for theScore Bet, recently inking a deal with the Toronto Blue Jays of Major League Baseball. The deal makes theScore Bet the exclusive sports betting partner for the Blue Jays over the next 10 years.

How to Bet With theScore Bet Ontario App

Betting with theScore Bet gives customers numerous ways to get in on the action. theScore Bet has been promoting “Get Into Bet Mode”  which is being promoted by well-known Canadian names like Gerry Dee (actor, comedian), Rex Lee (Entourage) and Susie Essman (Curb Your Enthusiasm). Bet Mode allows customers to create their own bet slip, view live odds and markets and much more. You’ll find plenty of ways to bet with Bet Mode such as:

Another exciting feature is the cash-out option. This almost operates like a live stock price. You’ll be able to see the value of your bet in real-time during games. Maybe you’re bet is almost a winner and you want to cash out while you’re up and take 90-percent of your potential payout. You can. Or maybe your ticket is basically dead in the water and you’re not feeling a comeback is in the cards. Perhaps you can still cash-out say 20-percent of your original stake and save some of your losses. It’s totally up to you.

The theScore Bet Ontario app is your destination for the best odds and betting markets for all of the big-game action taking place this weekend. If you didn’t download the app on April 4 when Canada sports betting launched, then today is your time to get set up for a long weekend of sports betting action.

New customers should know that theScore Bet is a new app. It’s not the same app you may have been using previously. Users will need to go to the Google Play or Apple stores to download the new theScore Bet Ontario app for their Android or Apple devices.

Here’s the info you need:

Download theScore Bet app for your Android or Apple device
Register your account with theScore Bet, providing the personal information required to set up your account
Make your first deposit, a minimum of $10
Begin betting on your favourite teams and sports

Canadian NHL and NBA Games to Bet on Easter Weekend

The NHL regular season is winding down and several teams are fighting for playoff seedings and playoff positions.

Over the next four days, all the Canadian teams will take to the ice.

Additionally, the Toronto Raptors tip-off their NBA Playoffs against the Philadelphia 76ers in the NBA Playoff Bracket.

Sign-up at theScore Bet and you’ll be able to make your Jets vs Panthers picks and get the best Raptors vs 76ers odds for all of the action.

And while their seasons may be just getting underway, don’t forget that the Blue Jays are back in action themselves in a series with the Oakland Athletics on tap. Meanwhile, all three Canadian MLS teams are also on the pitch on Saturday for MLS Week 7.