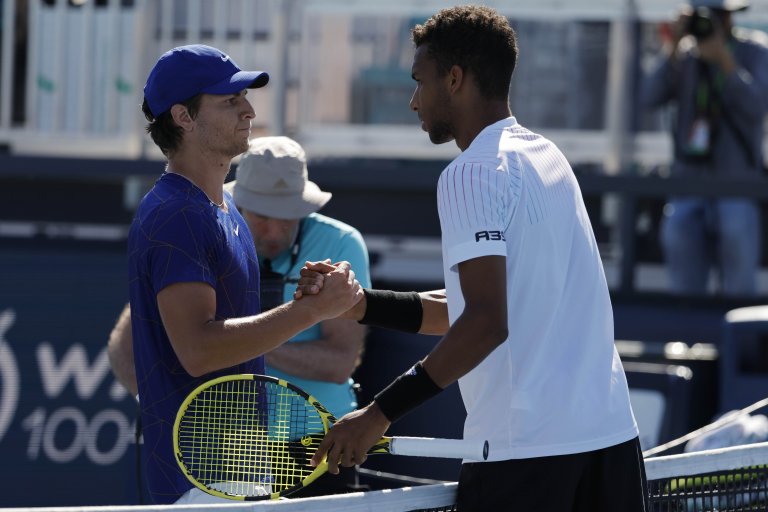 Félix Auger-Aliassime finally gets his Madrid campaign going Wednesday vs Cristian Garin of Chile
Their three previous meetings have all been on clay; Garin leads the head-to-head 2-1
Can the Canadian get some momentum going on the dirt? We break down the matchup

Félix Auger-Aliassime is doing everything he can to build some momentum on clay as he heads into Mutua Madrid Open round of 32 on Wednesday, May 4.

Odds as of May 3 at FanDuel

So much so, the 21-year-old Canadian has taken two wild cards in addition to two other planned tournaments in Monte Carlo and Estoril.

This is already his fifth tournament on the European clay swing. So far, he’s 4-4.

As we predicted in the pre-tournament preview, Garin took care of a depleted Frances Tiafoe in his opening round in Madrid.

Tiafoe used up everything he had in two major comebacks just to get to the final in Estoril last week. He had nothing on Sunday in the final, and two more days (including travel, and adjusting to the very different conditions) wasn’t nearly enough to turn that around.

It was also an indication that Garin, who had thoughts of quitting earlier in the season as he struggled with lack of confidence and mental health issues, is dangerous this week.

As in Houston, where he had a nice run last month, Garin has happy, positive memories of Madrid. Those memories helped in Texas, and they could help here. as well.

Only Clay History for Auger-Aliassime and Garin

As it happens, all three previous meetings between Auger-Aliassime and Garin have come on clay.

The first two were more than three years ago when 18-year-old Auger-Aliassime went down to South America to get some ATP-level reps on the clay.

Their rankings were similar at the time – Garin, four years older, was just inside the top 100 and Auger-Aliassime was just outside it. They split those, as Auger-Aliassime went on to his first ATP final in Rio.

Last year, when Garin was playing a lot better, he took care of Auger-Aliassime in straight sets in Monte Carlo.

Neither player, though, is in especially tip-top form.

So the winner of Wednesday’s second-round match is going to be the one who plays … less poorly.

Auger-Aliassime Not Firing on All Cylinders

The problem the Canadian is wrestling with at the moment is that his top-level – when his serve is firing and his forehand isn’t failing him – is at the top level in the world. When they’re not, his more basic level is vulnerable.

On those occasions, he seems to be biding his time waiting for his big weapons to click-in rather than figure out a Plan B – until it’s too late. The thinking gets all muddled when he has to grind.

On the other side, when Garin’s heart and mind aren’t truly in it, he’s a fairly pedestrian player.

But as mentioned, Madrid is a place where he has positive memories. It might be enough to inspire him.

First Serve the Key for Auger-Aliassime

Auger-Aliassime’s last match was a rather desultory loss last Friday to a player his age, American Sebastian Korda. He got only four games and exited in the second round of Estoril, where he was the No. 1 seed.

He’s had far too much free time since then to think about it, too.

Hopefully, after consulting with his coaches, he’ll come out against Garin with a clear game plan. He’s likely not going to outhit the Chilean from the baseline, no matter how well his forehand is firing.

The altitude in Madrid will help with velocity on his serve and groundstrokes. But the match will be played in the evening; that tempers the advantage.

On balance, the advantage seems to fall on Garin’s side at +198 to win outright.