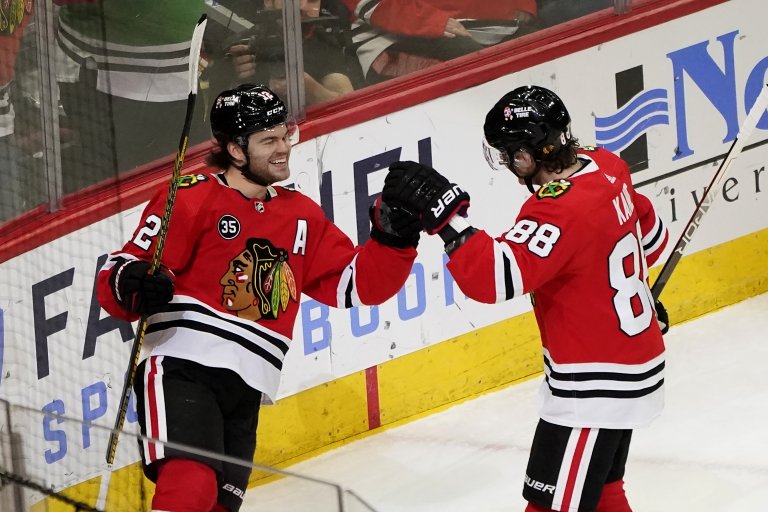 The Chicago Blackhawks host the Philadelphia Flyers on Monday, April 25th
The Blackhawks are listed as narrow home favorites in the Monday NHL odds
Read below for Flyers vs Blackhawks odds, picks and prediction

The Blackhawks are listed as -139 home favorites in the Monday NHL odds. The total is set at 6.5 for a matchup between two teams who have already been eliminated from playoff contention.

Let’s take a look at the Flyers vs Blackhawks odds and find the best bet for Monday Night Hockey.

Odds as of April 24th at Barstool Sportsbook.

The Blackhawks are listed on the moneyline at -139 odds, meaning they have 55% implied probability to win the game. You can also wager on Chicago to win by two or more goals on the puck line at +165 odds. The Flyers puck line price is -205.

The Blackhawks are favored to beat the Flyers at home in the Monday NHL odds. Chicago has lost two straight games and are 2-7-1 in their past 10 contests. Derek King’s team has been one of the NHL’s worst home teams, posting a 12-21-6 record in front of Illinois bettors.

Chicago has one of the lowest-scoring offenses in the league, averaging 2.60 goals per game. The Blackhawks haven’t been much better defensively, allowing 3.57 goals per contest. It’s no surprise Chicago sits at the bottom of the Central Division.

Chicago’s top line featuring Alex DeBrincat and Patrick Kane is the main reason to consider a wager on the Hawks versus Philadelphia. DeBrincat has reached 40 goals for the second time in his career, while Kane paces the team in scoring with 95 points.

The Blackhawks are expected to turn to Kevin Lankinen in goal against the Flyers. The 26-year-old netminder has been struggling, allowing three or more goals in seven straight starts. On the season, Lankinen owns an .887 save percentage and 3.62 GAA.

The Flyers are listed as underdogs versus Chicago despite owning a six-game winning streak in the series. Philadelphia has won two straight games, including a 3-0 shutout over Pennsylvania rival Pittsburgh on Sunday. Noah Cates scored a pair of goals in the victory.

Philadelphia’s back-to-back situation is certainly factored into Monday’s NHL betting line. The Flyers have also been decimated by injuries, as nine players are currently out of the lineup. Sean Couturier, Carter Hart and Rasmus Ristolainen have all been shut down for the season.

Much like the Blackhawks, the Flyers rank bottom-10 in both offense and defense. Philly is averaging 2.60 goals per game, while allowing 3.62 goals against. The Flyers have really struggled on the road, posting an 11-23-5 record away from Wells Fargo Center.

Goalie Martin Jones played Sunday, so the Flyers could turn to 25-year-old Felix Sandstrom against the Blackhawks. The Swedish netminder has only started three career NHL games, posting a .915 save percentage and 3.29 GAA.

Flyers vs Blackhawks is a meaningless game in terms of the playoff picture, but that doesn’t mean there’s no betting value. Philadelphia has typically performed well versus Chicago, registering four goals in each of the past three meetings.

Aside from having a momentum edge, the Flyers have also been generating significantly more high-danger chances than Chicago over the past month. Philadelphia has a 48.43 HDCF% at 5v5, while the Hawks are dead-last in the NHL with a 39.19 HDCF%.

Here are some betting trends to note for Flyers vs Blackhawks:

The Flyers offer road underdog value Monday due to Chicago having poor goaltending and struggling on home ice. Take the Philadelphia moneyline at +114 at Barstool Sportsbook.