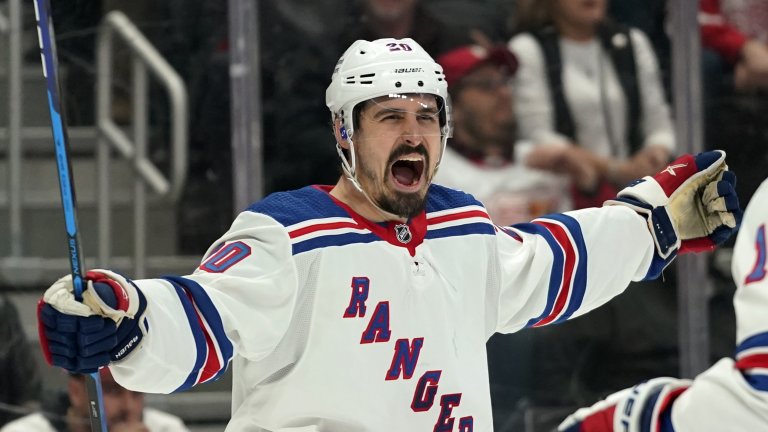 The Philadelphia Flyers visit the New York Rangers on Sunday, April 3rd
The Flyers are tied for the least amount of road wins in the NHL this season
Read below for Flyers vs Rangers odds, picks and predictions

It’s a lopsided divisional battle taking place on Broadway on Sunday night, when the basement dwelling Philadelphia Flyers travel to New York to take on the Rangers. The faceoff is scheduled to go at 7:00 pm ET at Madison Square Garden.

Separated by a whopping 40 points in the standings, the Rangers are massive -305 moneyline favorites as they are expected to handle this Philly team quite easily.

Let’s take a look at all the odds listed between the Flyers vs Rangers and offer you our NHL best bet and prediction for Sunday’s game.

Odds as of  April 2nd at Barstool Sportsbook.

It’s been a season to forget for the Flyers and that’s putting it mildly. On top of their dreadful record, they bid adieu to their captain, Claude Giroux, at the trade deadline.

In early November, after a pretty good start, they were just outside the top eight in the Eastern Conference playoff odds at +103. But they’ve tumbled ever since and will miss the postseason for the second year in a row.

They’ve especially struggled on the road, winning just eight games away from the Wells Fargo Center this season. And it’s gotten worse since the calendar has flipped to 2022.

In the new year, Philadelphia has an astonishingly awful record of 1-14-1 away from home. They’ve lost 11 of those 16 games by at least two goals. Needless to say, betting the Flyers home opponents in 2022 is as much of a guarantee as you can get these days.

Rangers Playing Down To Their Competition

The Rangers currently sit in the top 10 of the Stanley Cup odds at +1800. They’re battling for the second spot in the Metropolitan Division and home ice in the first round of the playoffs as they prepare for a likely matchup with the Pittsburgh Penguins.

Led be Vezina Trophy odds favorite, Igor Shesterkin, defense has been the hallmark of the Rangers this season, but they’ve been slipping a bit as of late. They’ve allowed 21 goals in their last six contests, an average of 3.5 goals per game. That’s almost a full goal above their season average of 2.6.

Also, the Blueshirts seem to have been playing down to their competition of late, which doesn’t bode well as they get set for a matchup against the lowly Flyers. As a favorite, they’re just 3-3 on the moneyline in their last nine games, but they’re 3-0 on the moneyline when they were the underdog in that same stretch.

They’ve scored wins over top teams like the Lightning, Hurricanes and Pittsburgh twice over that span. They’ve also lost to the likes of the Sabres and twice to the Devils, including going down 3-0 to New Jersey on Friday. The Rangers will hope to put that recent trend to bed against the Flyers on Sunday.

The Rangers have defeated the Flyers both times they’ve faced each other this year.

Based on the Flyers road form, it’s almost impossible to see any way the Rangers lose this game on Sunday night, but at -315 on the moneyline, the Rangers won’t be returning much value in the Sunday NHL odds.

Special teams may also play a role here, with the Rangers looking to take advantage of a Flyers penalty kill that ranks last in the league. They have the perfect net front presence with the man advantage in big winger Chris Kreider, who leads the NHL with 24 power play goals and is third in the Rocket Richard Trophy odds.

Here are a few other trends to take note of when searching for the best NHL bet in this game:

Betting against the Flyers vs the spread is providing a 16.39% ROI this season
The under is 5-0 in the last five meetings between these two teams
The Rangers are 6-1 in their last seven Sunday games

While the Rangers poor form of late against teams out of the playoff picture is a bit concerning, it’s unlikely they follow up Friday’s poor effort against the Devils with another stinker against the Flyers. They’re fighting for home ice and can’t afford to drop two winnable games in a row.

The Flyers have been getting crushed on the road so expect the Rangers to bounce back in a big way and win easily against Philadelphia at Madison Square Garden on Sunday night.