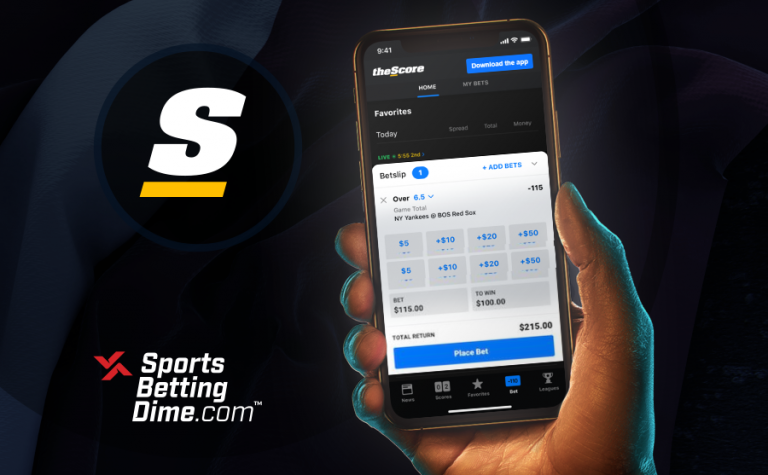 Legal sports betting launched this week in Canada on Monday, April 4
theScore bet has been up and running all week with a ton of betting options on their app
Sign-up at theScore Bet this weekend to bet on your favorite Canadian teams

While theScore has been more well-known as an app for providing news and score updates to its’ users, the company made a big splash into the sports betting world by launching its’ new app this week.

theScore Bet Is Live In Ontario

Entering into the sports betting and iGaming landscape was aided by the sale of the company to Penn National Gaming for $2 billion last year. Penn National also owns the very popular Barstool Sportsbook. Keep a lookout for some of the Barstool’s well-known personalities being involved in some cross-promotions.

However, theScore Bet has launched a “Get Into Bet Mode” marketing campaign to promote the Bet Mode on the app. You’ll see popular Canadian names like Gerry Dee (actor, comedian), Rex Lee (Entourage) and Susie Essman (Curb Your Enthusiasm). Bet Mode allows customers to create their own bet slip, view live odds and markets and much more.

Types of Bets You Can Make With theScore Bet Ontario App

Betting with theScore Bet will unlock a whole host of ways to bet on your favourite sports and teams. Types of bets include markets such as:

One of the great features with theScore Bet Ontario app is the ability to cash out your bets before they are settled. You’ll be able to see what the live value of your bets are within the app. Then choose to let it ride, cash out early for a portion of your potential winnings, or cut your losses and cash out to claim back a portion of your original stake.

theScore bet had already been operating in the United States in Colorado, Iowa, Indiana, and New Jersey. Now live in Canada, Ontarians can get theScore Bet Ontario app too. Launching in Ontario, is the equivalent of being the fifth-largest state in the US, given the size of the population of Ontario at approximately 15 million people.

How to Get theScore Bet Ontario App

If you didn’t sign up for the theScore Bet Ontario app on Monday, well then now is the time to do so this weekend to bet on a busy weekend of sports betting action.

New customers should know that theScore Bet is a new app. It’s a different app versus the one you may have been using presently. Users will need to go to the Google Play or Apple stores to download the new theScore Bet app for their Android or Apple devices.

Simply follow the steps below to sign-up at theScore Bet and start betting with the newest Canadian sportsbook!

Here’s the info you need:

Download theScore Bet app for your Android or Apple device
Register your account with theScore Bet, providing the personal information required to set up your account
Make your first deposit, a minimum of $10
Begin betting on your favourite teams and sports

If you had been holding out on downloading theScore Bet app this week and were waiting for a time when you could bet on all of your favourite Canadian teams, then the wait is over. This Saturday and Sunday offers a jam-packed slate of NHL, NBA, MLB and MLS action all featuring Ontario and Canadian teams in play.

Six Canadian hockey teams are on the ice on Saturday including Original Six rivals Toronto and Montreal. The Canadiens vs Leafs odds heavily favour the Cup-contending Maple Leafs. Meanwhile, the Blue Jays play their second game of the season at home to Texas. All three Canadian teams are on the pitch for MLS Week 6 and Ontario sports bettors can get down some action on the RSL vs TFC odds at 8:00 pm EST.

The action continues on Sunday across these major leagues, plus the Raptors visit the Knicks in the NBA.