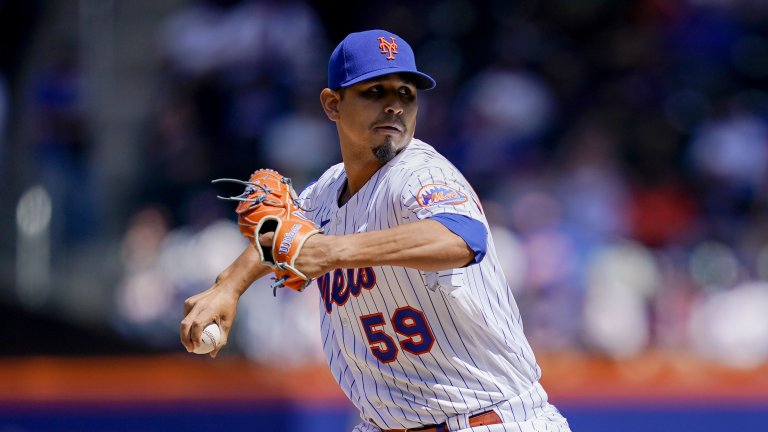 The Giants and Mets wrap up a four-game set on Thursday afternoon
New York is a -125 favorite for the series finale
Find the Giants vs Mets odds, lines, preview, and picks below

The San Francisco Giants will be looking for the split on Thursday against the New York Mets in the series finale of a four-game set at Citi Field. The first pitch is scheduled for 1:10 PM ET. Read on for the Giants vs Mets odds.

San Fran sends righty Anthony DeSclafani to the mound here, while the Mets counter with Carlos Carrasco, who has been absolutely brilliant in two starts so far.

Odds as of April 20th at Caesars Sportsbook.

The Mets are a -130 moneyline favorite here and the under has been hit in four of the last five meetings between these National League rivals. New York’s World Series odds are also sitting at +1500 after a 9-4 start.

DeSclafani was one of the Giants’ best arms in 2021 and after the departure of Kevin Gausman, he’s expected to be once again. The right-hander has made two starts this season, tossing 8.1 innings and posting a 4.32 ERA. He’s allowed four earned runs while striking out nine.

Last time out, DeSclafani threw 4.2 frames of two-run baseball against the Guardians and racked up four K’s. He barely faced the Mets last year, but their lineup is hitting just .182 against him in 82 at-bats.

Carrasco meanwhile, is absolutely dominating in his second year with the Mets. Although he hasn’t pitched more than 5.2 innings through his two outings, the 35-year-old looks practically unhittable. On April 16th, the veteran tossed five innings of scoreless baseball while striking out eight and allowing a mere three hits.

So nice to see vintage Carrasco out there 🙌
pic.twitter.com/MinBJhIRwM

As for the Giants, Carrasco only made one start against them in 2021 and fared well, going 7.2 innings and surrendering two earned. Their lineup is hitting only .081 vs. Carrasco, but it’s a small sample size of 33 ABs.

San Francisco broke out of a two-game losing skid on Wednesday with their win over the Mets as the bats did a nice job of scoring runs off Chris Bassitt. Mike Yastrzemski and Joc Pederson both smacked two hits apiece while Brandon Belt went yard on his birthday with an absolute bomb. Most of this lineup has faced Carrasco, but there’s been little to no success.

Aside from a two-run showing on Wednesday, New York has been very solid offensively. They rank top-10 in home runs, average, stolen bases, and OPS, among others. Francisco Lindor is leading the charge, hitting .310 with three bombs, four doubles, and nine RBIs in total. He’s also at +1600 in NL MVP odds.

There were actually a lot of positives at the plate in the third game of this series as Brandon Nimmo, Pete Alonso, and Eduardo Escobar all enjoyed multi-hit games. Unfortunately, the Mets couldn’t capitalize though, stranding 10 runners.

Carrasco is far too good right now to bet against. I believe he’ll put together another quality start and lead the Mets to an important win. Also, given the recent trends with the under, it should offer value again.