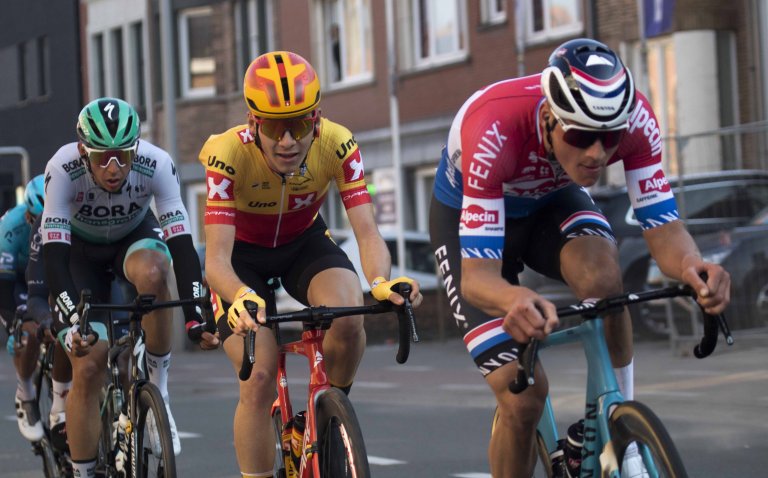 Stage 1 of the Giro d’Italia (Friday, May 6) is mostly mundane with a twist at the end
The Grand Tour’s first ever trip to Hungary starts off with a 195km trek from Budapest to Visegrád
Can we find a mild upset winner and build our Giro bankroll on Stage 1?

The first 189 km of this year’s Giro d’Italia might as well be a pleasant not particularly interesting flat ride. The Giro’s first ever trip to Hungary gets intriguing, and maybe daring, over the final six kilometers. A puncheur could win the day as riders depart Viségrad’s center and go up a 4.2% grade to the finish.

This year’s Giro gets going bright and early (6:20 am ET) Friday for viewers in North America. Mathieu van der Poel is the Stage 1 favorite. Let’s look at the odds and several contender to wear the Maglia Rosa heading into Saturday’s individual time trial.

Odds as of May 3rd at DraftKings Sportsbook.

While the first stage in no way dictates what will happen over the next three weeks, it can set a tone. Is there a sprinter strong enough climbing that he can take daily honors? Could a GC candidate put his foot down and make clear who the favorite is?

Alternatively, a breakaway isn’t impossible with racers keyed up early on, though the course probably is best suited for a puncheur. Who is the best stay with the pack rider, who can then strategically bolt up the climb to the finish to taste victory?

Let’s look at some top options to win Friday’s stage.

Mathieu van der Poel is nothing if not versatile. He has experienced success in cyclo-cross, mountain bikes, and on the road. In his first Grand Tour, van der Poel took Stage 2 of last year’s Tour de France.

The 27 year old is having a very strong start to 2022. He won Dwars door Vlaanderen, and the Tour of Flanders for a second time. His style is well suited to pounce when the real racing begins.

Biniam Ghirmay can win a sprint finish, or in a breakaway. The 22-year-old from Eritrea is making his Grand Tour debut.

Caleb Ewan is a sprinter’s sprinter. The 27-year-old has taken 11 Grand Tour stages including five in his four tries at the Giro.

If Stage 1 ends up as true sprint, the Pocket Rocket should be considered the favorite.

Italians are nothing if not prideful and Alejandro Valverde would love to turn back the clock and give his nation a win in the first ever Giro d’Italia stage in Hungary.

Valverde recently turned 42 years old. He has won 17 Grand Tour stages and captured the Vuelta a España in 2009.

The only time Valverde raced in the Giro, he finished third. However, that was six years ago. In eight of the last 10 years he has finished among the Top 10 in a Grand Tour, and been in the Top 5 on eight occasions during that time.

João Almeida is a legitimate GC contender in the 2022 Giro d’Italia odds, but there is more pressure on him to gain time on stages like this than the other top dogs. Almeida is known more as a sprinter and intermediate distance specialist, and with only two short time trials on the course, he needs to be opportunistic.

Almeida was fourth in the Giro in 2020, and sixth last year. He has not yet won a stage, but has a new more powerful team this year. At the age of 23, the time may be now for Almeida, and this is the type of stage he can go after.