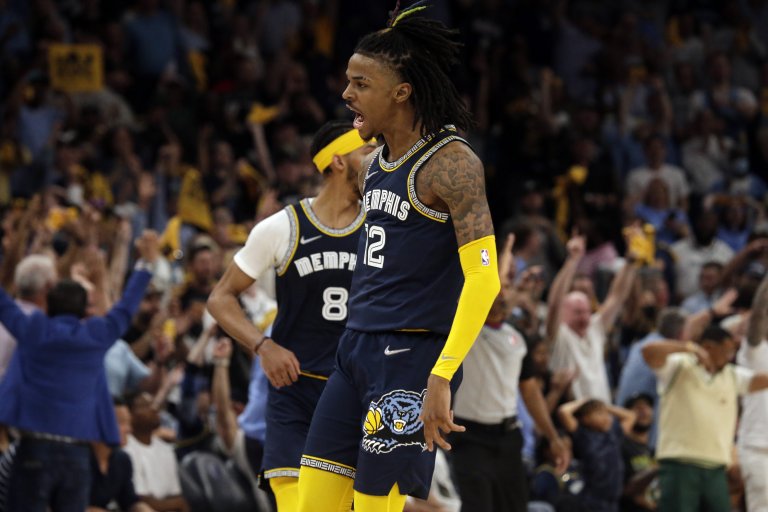 May 3, 2022; Memphis, Tennessee, USA; Memphis Grizzlies guard Ja Morant (12) reacts after a basket during the second half in game two of the second round for the 2022 NBA playoffs against the Golden State Warriors at FedExForum. Mandatory Credit: Petre Thomas-USA TODAY Sports

The Memphis Grizzlies take on the Golden State Warriors in Game 3 of their best-of-7 series
Ja Morant erupted for 47 in a Game 2 win to even things at 1-1
See the Grizzlies vs Warriors Game 3 odds, preview and prediction below

We’re about to find out if the Memphis Grizzlies are ready for prime time.

After a scintillating 106-101 win in Game 2 to even up their best-of-7 series with the Golden State Warriors, the series shifts to San Francisco, where the Warriors have been undefeated in these playoffs.

They’ll also be looking to bounce back from their worst 3-point shooting performance in the Curry-Klay-Draymond era.

Meanwhile, both teams will have to make roster adjustments after a Dillon Brooks hard foul injured Gary Payton II.

Odds as of May 6th at Caesars Sportsbook

Surprisingly, despite both games in this series coming down to the wire, the Warriors are 7-point favorites.

It all gets underway from Chase Center Saturday at 8:30pm ET, in a game that can be seen live on ABC.

One dangerous play in Game 2 has altered both lineups in Game 3. A Dillon Brooks flagrant foul on Gary Payton II in mid-flight resulted in the Warriors guard — and only live body with a chance of defending Ja Morant — suffering a broken elbow.

Dillon Brooks was ejected for this flagrant 2 on Gary Payton.

He may be able to return to the playoffs if Golden State can get to the Finals. Veteran Andre Iguodala will also miss another game as he deals with a neck injury.

Brooks earned an ejection for that foul, and a suspension in Game 3. Ziaire Williams likely slides into the starting spot.

With all due respect to the all-world accomplishments of Steph Curry, it’s clear that Ja Morant is the best player in this series. He was a wrecking ball in Game 2, helping Memphis even up the series.

He went 15-for-31 from the field for 47 points, adding eight rebounds and eight assists. Morant clubbed GState’s defensive scheme, which appears to be to sag off, give up the outside shot and stop his drives to the paint.

The 22-year-old is taking the challenge and launching from deep, drilling 5-for-12 in Game 2. He also scored the final 15 Grizz points to put the game on ice.

Steve Kerr said more double teaming of Ja Morant is “on the menu” of options for Game 3. Here’s a Jordan Poole blitz and double from Game 2. Nearly caused turnover, instead led to one of Ziaire Williams four 3s. pic.twitter.com/TlCD0VvWlF

With Desmond Bane clearly compromised with a back injury, the rest of the Grizzlies roster helped pick up the scoring slack. Williams, who played 28 minutes, scored 14 points, including a 4-for-8 mark from downtown.

Jaren Jackson Jr put up a second straight double-digit scoring effort, potting 12 points and eight rebounds, while Brandon Clarke was a perfect 4-for-4 from the field for 10 points.

Even the greatest shooters have off nights, and that’s exactly what the Warriors dealt with in Game 2. The Dubs went 7-for-38 from three-point range, a lowly 18.4% clip.

Steph Curry feels like the Warriors could be up 2-0 in the series right now pic.twitter.com/IHT0PDopGl

Curry led the way with 27 points, but was just 11-for-25 from the field, and just 3-for-11 from deep. His Splash Brother Thompson didn’t fare much better, scoring 12 points on 5-for-19 from the field, and 2-for-12 from distance. Jordan Poole had 20 points and five dimes.

After getting seemingly every look they wanted in a thrashing of the Nuggets in Round 1, the offense has run a little dry against the Grizzlies, who owned the 6th-best defensive rating in the regular season.

On the other end of the court, it’s going to take a collective effort to slow Morant, who cooked anyone standing in his way. With no A+ defender to handle Ja’s athleticism, expect a healthy dose of double teams and traps, forcing other Grizzlies to do work.

The Grizzlies were the top team against the spread in the NBA this season, and they’re now 3-0 ATS in their last three. And it’s not like they’ve had issues at Chase: they split their home dates their in the regular season. They are, however, 0-3-1 ATS in their last four as a road ‘dog.

Golden State is strong at home, second only to Phoenix with a 31-10 mark, but Memphis posted the second-best road mark in the West at 26-15.

Expect the Dubs’ offense to look better Saturday — there’s really no way to go but up. Still, Morant should shine, and should keep Memphis well within range in Game 3.