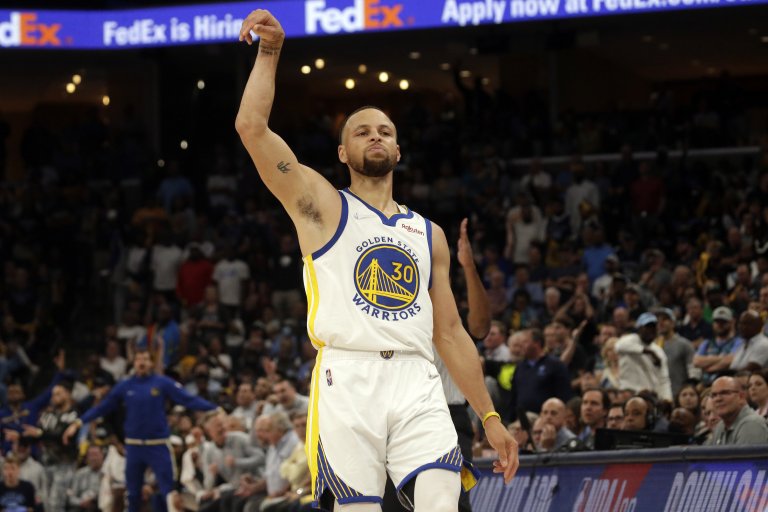 May 3, 2022; Memphis, Tennessee, USA; Golden State Warriors guard Stephen Curry (30) reacts after making a three point basket during the second half in game two of the second round for the 2022 NBA playoffs against the Memphis Grizzlies at FedExForum. Mandatory Credit: Petre Thomas-USA TODAY Sports

The Memphis Grizzlies proved during the regular season they could win without star point guard Ja Morant. Now it looks like they’ll have to prove it in the playoffs as well.

According to Grizzlies head coach Taylor Jenkins, Morant is unlikely to play in Game 4 against the Warriors on Monday due to a knee injury he suffered in Game 3. His absence has had a major impact in the betting market, as Memphis is a major underdog to Golden State in Game 4.

Odds as of May 8th from FanDuel Sportsbook.

The Warriors are currently 10-point favorites, in a contest that features a total of 224. Tip-off is scheduled for 10pm ET at the Chase Center in San Francisco, CA, with TNT providing the broadcast coverage.

Golden State leads the best-of-7 series 2-1 and is a heavy favorite to move on to the conference final. They’re -1000 to advance in the series market, while the Grizzlies are available at +650.

The immediate extent of Morant’s injury has not been disclosed by Memphis. What we do know is that it’s to Morant’s right knee, the same knee that caused him to miss nine straight games in March and April.

Ja Morant is unlikely to play in Game 4 due to the knee injury he suffered in Game 3, Grizzlies coach Taylor Jenkins said. pic.twitter.com/WfcKxDzNXw

The Grizzlies believe the injury was caused by Jordan Poole grabbing Morant’s knee while going for the ball on a trap in the fourth quarter of Game 3. Poole denies any ill intent, and the video certainly doesn’t seem to show any malicious action.

That didn’t stop Morant from tweeting out that Poole “broke the code” a tweet he later deleted. The NBA has reportedly reviewed the incident and will not take any disciplinary action on Poole.

Morant missed 25 games during the regular season, and believe it or not, Memphis thrived without him. They went 20-5 in those contests and beat Golden State 123-95, although Steph Curry, Klay Thompson and Draymond Green didn’t play.

Elsewhere on the injury front, the Warriors will once again be without Gary Payton II and Andre Iguodala. Payton is expected to be out three to five weeks with a broken elbow, while Iguodala still isn’t ready to return from his neck injury.

Even before the Morant injury, Golden State was well on its way to winning Game 3. The Warriors took a 21-point lead into the fourth quarter, and nearly broke the postseason record for true shooting percentage.

Golden State shot 63% from the field and had a 76.1 true shooting percentage, which was just shy of the NBA Playoffs record of 77.8%.

Curry led the way with 30 points, while Poole added 27 points and Thompson splashed 21 points. Thompson, who entered the game shooting 29% from the field for the series, broke out by knocking down eight of his 13 shots, including four of his six three-point attempts.

The Grizzlies started the game off hot, but cooled quickly, and finished just 40-of-92 (43.5%) from the field. The Warriors dominated inside and on the glass, outscoring Memphis by 18 in the paint, and outrebounding them by nine boards.

Golden State finished with 13 more assists en route to winning for the fourth straight time at home during this year’s playoffs. Dating back to 2015, their first of three championships over the last decade, they’re 49-11 at home in the postseason.

On the bright side, the Grizzlies will get Dillon Brooks back for Game 4. Brooks was suspended for Game 3 for his flagrant foul on Payton in Game 2, that broke Payton’s elbow and caused Steve Kerr to state that Brooks “broke the code”.

Brooks’ return is key without Morant, as he leads the team in usage when Morant is off the floor. Brooks has a usage rate of 25.2 with Morant on the court, but without him, Brooks’ usage rate climbs to 30.4.

It’s one thing for Memphis to win games during the regular season without its best player, but it’s a whole new challenge to do so in the playoffs. However, that doesn’t mean you should run to the window to back the Warriors.

While Golden State’s offense has been phenomenal all postseason, their defense has shown cracks. They rank fifth out of the remaining eight teams in defensive rating during the playoffs, while the Grizzlies have more than enough firepower even without Morant to keep this game close.

focused on the get back 〽️ pic.twitter.com/UlKGdDXoiQ

In 25 games without Morant this season Memphis averaged 117.8 points, which was two points higher than they averaged when he did play. Not only were the Grizzlies proficient at winning those games Morant missed, they were also ATS crushers.

Memphis was 18-7 against the spread in games Morant sat out, winning outright as an underdog seven times.