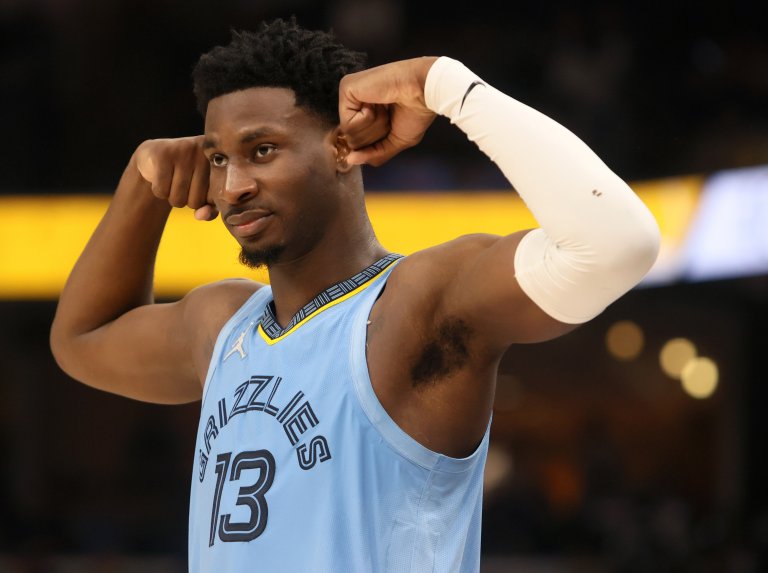 May 11, 2022; Memphis, Tennessee, USA; Memphis Grizzlies forward Jaren Jackson Jr. flexes in celebration during their first half against the Golden State Warriors in game five of the second round for the 2022 NBA playoffs at FedExForum. Mandatory Credit: Joe Rondone-USA TODAY Sports

The Grizzlies visit the Warriors for Game 6 on Friday night
Golden State currently owns a 3-2 series lead
Find the odds, preview, and prediction below

The Ja Morant-less Memphis Grizzlies will be looking to ride the high and force a Game 7 when they visit the Golden State Warriors for a win or go home Game 6 on Friday. The tip-off is scheduled for 10pm ET at the Chase Center.

The Grizz absolutely dominated the Dubs in Game 5 on Wednesday, securing a 39-point victory. With the series now at 3-2, Memphis faces another elimination game. However, Golden State is yet to lose at home in the playoffs so far.

Odds as of May 12th at FanDuel.

The Warriors are an 8.5-point home favorite for Friday’s contest.

No one gave the Grizzlies much of a chance once Morant injured his knee. But, this is a team that has thrived all season long and with their backs against the wall on Wednesday, they delivered in a big way.

There isn’t really any other way to put it but Memphis wiped the floor with the Dubs. It’s that simple.

Memphis had a 55-point lead at one point and never trailed in this game, with essentially the entire rotation flourishing. Seven different players finished in double digits in points, with Tyus Jones, Desmond Bane, and Jaren Jackson Jr all putting up 21 apiece.

The Grizz also shot 44% from deep and 48% from the field, with Bane and Jackson both draining four triples each.

From fast-break points to outplaying Golden State on the boards, Taylor Jenkins’ squad showed up in a big way. They need to keep shooting the ball well and do their absolute best to control the paint in Game 6.

If Memphis can do that, a Game 7 could be a serious reality. The Warriors won’t likely commit 22 turnovers again either, which means the Grizzlies will need to work for every single basket. Bringing the intensity from the get-go is going to be crucial.

Golden State has looked pretty solid in this second-round matchup, but they essentially didn’t even show up in Game 5 in Memphis. This couldn’t have been a worst performance from Steph Curry and Co., committing over turnovers and getting bodied down low by the tune of 55-36 on rebounds. Honestly, the Warriors didn’t even shoot the ball all that terrible though.

“One thing I don’t respect is people who only bring it when they’re winning. We call those frontrunners. We got our ass kicked. It happens. When you spew it out, you gotta be able to take it.”

Draymond Green on whooping that trick with Grizzlies fanspic.twitter.com/7FSg8ChTGn

As a group, the squad drained 36% of their threes and shot 45% from the field. This loss simply came down to a lack of effort and desire. The Grizzlies’ athleticism and intensity overmatched them and Golden State was outscored a whopping 24-5 on second-chance points.

Attention to detail wasn’t there. On a more positive note, Klay Thompson enjoyed a respectable night, pouring in a team-high 19 points on 7-for-12 shooting. He struggled immensely in Game 4 on Tuesday.

Locked in on Game 6 pic.twitter.com/V5Sj3YxZfP

Also, rookie Jonathan Kuminga got the start and dropped 17, showing serious promise. Despite the atrocious defeat, this is the Warriors, a championship-caliber team. Heading back home, you can expect them to come out guns blazing as they look to close out the series and book their spot in the Western Conference Finals.

Memphis looked phenomenal the other night but I do think their postseason road is set to end.

Although most of the games in the series have been close, the Warriors should cover the spread here. They were just embarrassed and will respond in a big way in front of  Dub Nation.