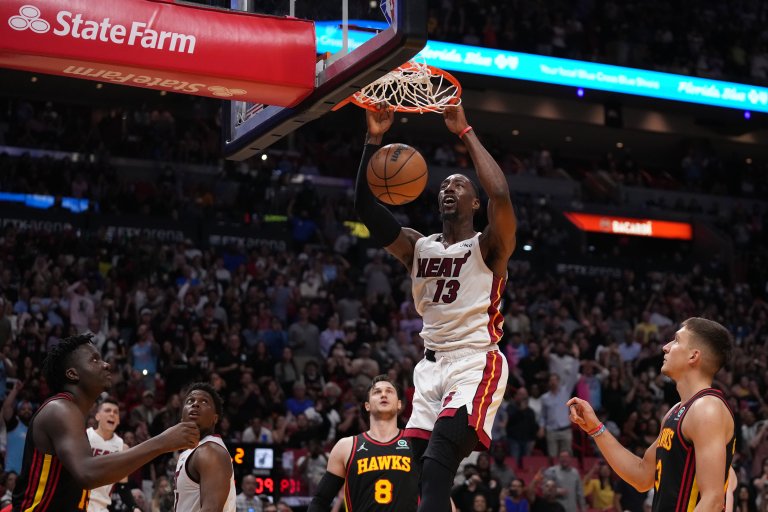 The Heat are 6.5-point home favorites over the Hawks on Sunday in Game 1 of their Eastern Conference first-round series
The Heat are the No. 1 seed after going 53-29 in the regular season
A look at the Hawks vs Heat odds and matchup can be found below with a prediction

The well-rested Miami Heat host the Atlanta Hawks in Game 1 of their Eastern Conference first-round series at 1 pm ET Sunday at FTX Arena.

Odds as of April 16th at FanDuel.

The Heat are 6.5-point favorites in a game that will be televised by TNT. As -260 picks on the moneyline, they have an implied win probability of 72.22%.

The Hawks have won three in a row both straight-up and against the spread. However, they are 15-27 ATS in road games this season.

Trae Young led the way as the Hawks rallied from a 10-point deficit to beat the Cavaliers on Friday night. He scored 32 points in the second half – 16 in each quarter – and finished with nine assists.

Trae Young scored or assisted on 43 of 56 second half points for the Hawks, accounting for more points than the Cavaliers had in the 2nd half (40). pic.twitter.com/gljMBowFYX

Young was third in the NBA in scoring in the regular season with 28.4 points a game and third in assists with a 9.7 average.

Clint Capela (knee) was injured in the second quarter and did not return. His status for Sunday is questionable.

Capela pulled down 11.9 rebounds a game in the regular season, the fourth-best mark in the league.

The Hawks were also without John Collins (finger, foot) and Lou Williams (back). Both have been ruled out for Game 1.

Atlanta averaged a league-low 11.9 turnovers a game in the regular season and its offensive rating of 116.5 was second. The Hawks were 26th in defensive rating, though, allowing 114.9 points per 100 possessions.

The Heat had their six-game winning streak ended at Orlando on Sunday when coach Erik Spoelstra rested four starters. That also ended a six-game ATS win streak for Miami, which is 21-20 at home versus the number this season.

While the Heat were 10th in offensive rating (113.7), they finished the regular season with seven players averaging double figures in scoring. They currently have the sixth-best NBA Championship odds.

Jimmy Butler led the way as he had another fine all-round season with averages of 21 points, 5.9 rebounds, 5.5 assists and 1.65 steals.

Tyler Herro is the favorite in the Sixth Man of the Year odds after averaging 20.7 points, 5.0 rebounds and 4.0 assists. The Heat believe they have a Defensive Player of the Year candidate in Bam Adebayo, who averaged a double-double with 19.1 points and 10.1 rebounds.

Herro (knee) is on the injury report but is expected to play. Dewayne Dedmon (ankle), Markieff Morris (hip) and P.J. Tucker (calf) are questionable.

An encouraging sign in Sunday’s loss was the play of Victor Oladipo, who had 40 points, 10 rebounds and seven assists while making 5 of 11 three-pointers. The two All-Star played just eight games in the regular season while recovering form quadriceps surgery but could be a factor off the bench in the playoffs.

The Heat won three of four games against the Hawks in the regular season, including both games in Miami. The teams last played just over a week ago on April 8 and the Heat notched a 113-109 victory on their home floor.

Young had 35 points and eight assists for the Hawks while Bogdanovic added 25 points and Capela had a double-double with 17 points and 14 rebounds. Capela helped the Hawks to a 43-33 advantage on the boards while Atlanta also forced 17 turnovers.

Normally this would be a spot to bet on the well-rested Heat. However, the Hawks have some momentum going and should keep it close.