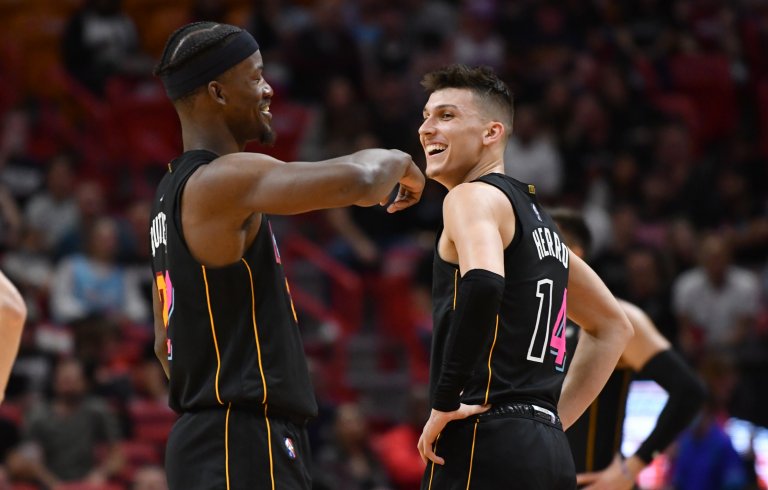 The top-seeded Miami Heat host the Atlanta Hawks Friday
Atlanta is trying to lock up a home game for the upcoming play-in
Find the odds, lines, preview, and betting prediction below

What will they bring to the table Friday night when the host the Atlanta Hawks, who still have plenty to play for?

Atlanta is  currently locked in a tie with the Brooklyn Nets for the eighth seed. They trail the Cleveland Cavaliers by a game for that crucial seventh seed, which comes with hosting a play-in date.

It tips off at 8pm ET from FTX Arena in South Beach, a game that can be seen live on NBA League Pass. The hometown Heat are 3-point favorites.

Odds as of April 7 at Caesars Sportsbook

The Heat have ripped off five straight, and they’ll be looking for their conference-best 29th home win.

Atlanta enters the contest have reeled of six of their last seven. They are just 15-24 on the road this year — the lowest of road win total of any playoff-bound team in the East.

After watching their 5-game win streak come to a halt in Toronto, Atlanta bounced back the very next night with a 118-103 win over Washington. That guaranteed the Hawks would finish above .500 this season.

Trae Young was the usual offensive catalyst, pouring in 30 points and 11 assists in the win. Danilo Gallinari also posted a double-double with 26 points and 10 rebounds.

Bogdan Bogdanovic chipped in with 18 points and four assists off the bench, scoring all of his points on 6-for-9 shooting from downtown. In fact, he’s hit three or more triples in eight of his last 10 games.

Bogdan Bogdanovic is looking to break this game open 🤑pic.twitter.com/RP3M8VWJg4

The Hawks have really turned up the offense as they enter the postseason: they’re averaging 119.8 points per game in their last 10, a jump from their season average of 113.8 — a mark that ranks sixth in the NBA.

Proving that winning cures everything, the Heat have put a season-long 4-game losing skid and an ugly sideline bicker-battle between Jimmy Butler, Udonis Haslem and Erik Spoelstra behind them with as they’ve ripped off five wins in a row.

A sixth would mark the longest streak of the campaign, and is likely the only thing they’re playing for.

The road out of the East was assured to go through Miami after both the 76ers and Celtics lost Thursday. While Milwaukee could still match them in wins, the Heat own the tiebreaker.

Still, Miami only owns the 5th-best odds to win the Eastern Conference.

The Heat dominated last game, going on a season-high scoring binge in a 144-115 dismantling of the Charlotte Hornets.

Tyler Herro, a runaway favorite in the 2022 NBA Sixth Man of the Year odds, scored a career-high 35 off the bench, part of four Miami players that posted 21+ points in the blowout.

Butler had 27 points, eight assists and five boards, while Duncan Robinson also came off the bench to score 21 points on 7-for-11 from three-point range.

But not tonight. Finally broke the record 👌 pic.twitter.com/BTmntyyZ9M

Over the course of their five-game streak, Miami is putting up 122.8 points per game. That’s a big jump from their 110 season average, which ranks 17th.

As is seemingly the case all season, the Heat roster is in flux heading into this one. PJ Tucker (calf) has already been shut down for the rest of he regular season. Caleb Martin (calf), Gabe Vincent (toe), Omer Yurtseven (illness), Markieff Morris (hip) and Dewayne Dedmon (ankle) are all game-time decisions.

This will be the fourth and final head-to-head on the year, with the Hawks getting their first win in the series in the last game, a 110-108 win at home. All three previous games were played between Jan 12-21.

Miami is 5-0 against the spread in their last five, while the Hawks have also been sharp too, going 4-1 ATS in their previous five. Despite the Heat’s well-known defense, which currently ranks third in the NBA in points allowed at 105.3, this has the makings of a shootout.

This matchup pits the top two three-point shooting teams in the league, with the Heat scorching at a 37.9% clip, and the Hawks right behind at 37.4%.

With Young fourth in the league in scoring, and Miami going over the total in four of the last five, look for the the two teams to keep cooking offensively down the home stretch. Don’t shy away from that higher number, even if the Heat do decide to rest more of their guys.