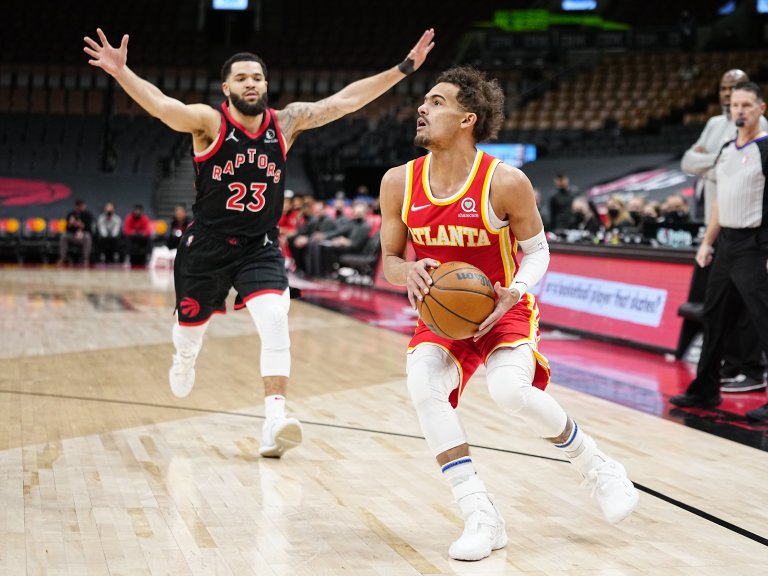 The Atlanta Hawks seek sixth straight win as they visit the Toronto Raptors
Toronto had their five-game win streak snapped last time out vs the Miami Heat
Find the odds, lines, preview, and betting prediction below

The Toronto Raptors are two wins away from clinching a playoff spot, and out of the uncertainty of the play-in.

Their opponent Tuesday night, the Atlanta Hawks are locked into the play-in, but can still improve from their current spot in eighth to seventh, where they would host the eighth seed at State Farm Arena.

It makes for a high-stakes showdown with plenty to play for at Scotiabank Arena, with the home-team Raptors pegged as 4-point favorites.

Odds as of April 4 at Caesars Sportsbook

The Hawks enter this contest playing their best hoops of the season, riding a 5-game win streak into Toronto.

The Raptors, meanwhile, saw their five-game win streak come to an end when the top-seeded Miami Heat beat them in Kyle Lowry’s return to TO game.

It all gets underway at 7:30pm ET, in a game that can be seen on NBA League Pass.

Part of Atlanta’s streak have been back-to-back wins against fellow teams locked into the play-in bracket. They dismantled the Cleveland Cavaliers 131-107 on Thursday, then outlasted the Brooklyn Nets — and a career-high 55 from Kevin Durant — in a 122-115 win.

The Hawks have been driven by Trae Young, who’s tied for fourth in league scoring at 28.3 points per game.

Trae leads the @ATLHawks to their 5th-straight win as they move up to No. 8 in the East! pic.twitter.com/sRQAlEZpD3

Young hung 36 points on the Nets Sunday, which included a 4-for-9 mark from downtown. Young also added 10 assists and six rebounds.

Deandre Hunter chipped in with 15 points and 10 rebounds, while Danillo Gallinari added 15 of his own off the bench.

During this Hawks’ fun-run, Young has led the Hawks in scoring four games, while averaging 30.8 points and 11.6 assists on 48.9% shooting from the field and and 37.5% from deep.

As a team, Atlanta has been scorching offensively, with 121 points the lowest output in this stretch. They’re averaging 128.4 points a game. That’s helped them outscore their defensive shortcomings: they’re just 26th in defensive rating on the season.

The Raptors hung with the East’s top seed for most of Sunday, but couldn’t make enough plays down the stretch in a 114-109 loss to snap their streak. Still, Toronto has won 11 of their last 14, and are the kind of wild card no team wants to mess with in the postseason.

Fred VanVleet set the single-season franchise mark for most threes in a season — passing Kyle Lowry — as he poured in 29 in the loss. He added seven assists and three steals.

Pascal Siakam’s splits against the Top 10 defences this season:

The Raptors, who rank eighth in defensive rating, and are tied for seventh in scoring defense with the Knicks, could not stop Miami’s long-range attack. The Heat finished 18-for-38 from long range against the Raptors, an impressive 47.4% clip.

This is the fourth and final meeting between these two clubs. After Toronto won the first two, the Hawks blew out Toronto last game in a 127-100 drubbing. Young led the way with 41 points and 11 dimes.

Both teams may be shorthanded in this one. Bogdan Bogdanovic (knee) and Danilo Gallinari (knee) will both be a game-time decision. John Collins (finger) is out for another week.

Trae Young was playing with the Raptors’ defense🥶

For the Raptors, OG Anunoby (thigh) missed last game, and was replaced by Khem Birch in the starting lineup. He’ll be a game-time decision. Forward Yuta Watanabe (quad) will also be out.

With Atlanta’s hot scoring run, and considering the teams have crossed this total the last two head-to-heads, look for the Hawks to force Toronto into their pace.