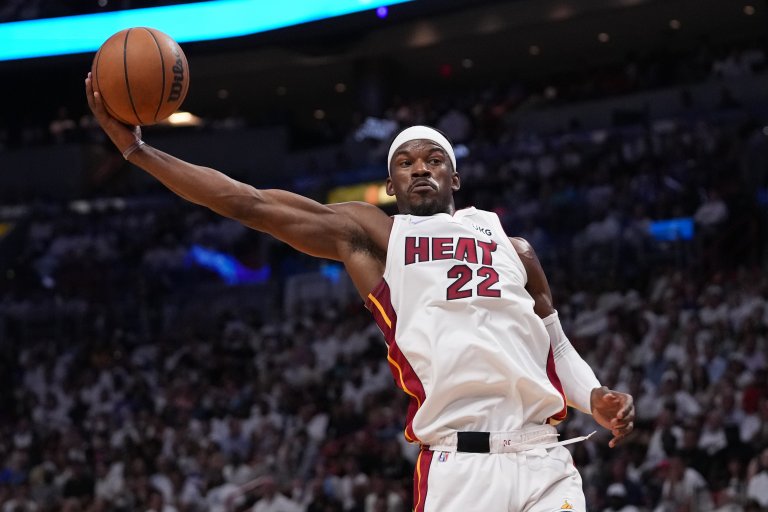 May 4, 2022; Miami, Florida, USA; Miami Heat forward Jimmy Butler (22) rebounds the ball during first half in game two of the second round for the 2022 NBA playoffs against the Philadelphia 76ers at FTX Arena. Mandatory Credit: Jasen Vinlove-USA TODAY Sports

The Heat and 76ers head to Philly for Game 3 on Friday night
Miami is currently up 2-0 in the best-of-7 series
Find the Heat vs 76ers odds, preview, and picks below

The Miami Heat head into Game 3 on Friday against the Philadelphia 76ers with a commanding 2-0 series lead. The tip-off is scheduled for 7pm ET at the Wells Fargo Center.

Miami convincingly won Game 2 by a score of 119-103 and will be looking to move one step closer to the Eastern Conference Finals here.

Philly, meanwhile, has struggled without Joel Embiid, who is currently listed out for this contest. But, there is a slim possibility he clears concussion protocols by game time.

Odds as of May 5th at FanDuel.

The Heat is a 3-point road favorite for Friday’s matchup and has comfortably covered in both games thus far.

There is no question Miami would’ve liked to have Embiid on the floor for the Sixers. Jimmy Butler even said himself he wanted to compete against the 2022 NBA MVP odds finalist.

However, they will certainly take dominating Philadelphia on every level so far because of the big man’s absence. Butler and Bam Adebayo led the charge on Wednesday as Erik Spoelstra’s squad put their brilliance on full display.

Bam had his way in the paint against a damaged 76ers frontcourt, showing out for 23 points and nine rebounds in the win. Jimmy Buckets also contributed 22 and 12 dimes while also shooting 8-for-15 from the field.

Tyler Herro had another standout night after a dismal first round as well. One overlooked weapon for Miami though, has been Victor Oladipo. He scored 19 points off the bench and gives Spoelstra another reliable scorer whenever needed.

Last night was a birthday to remember for Dipo 🎂 pic.twitter.com/Hsof5AOd1R

Philly’s defense couldn’t contain the Heat in Game 2, especially from deep. They shot a blistering 48%, with Herro and Oladipo combining for six triples on their own. If there was one criticism from Wednesday’s victory, however, it could be the 14 turnovers which the Sixers translated into 18 points.

All in all, Miami is in cruise control right now and hasn’t been tested yet. Their depth and stout two-way play are simply too much to handle for a team missing their best player.

This was always going to be a tough series to stay competitive in sans Embiid. That’s unless James Harden played as he did during his Houston Rockets days. Unfortunately, The Beard hasn’t done so, putting up 16 and 20 points, respectively through the first two games.

Harden simply looks incapable of taking over and erupting for 30+, which is part of the reason Philly went out and got him in the first place. The quickness and hunger to score simply aren’t there.

Tyrese Maxey was the main bright spot in Game 2, going off for 34 points, but there was a serious lack of help from the supporting cast. Aside from Harden’s 16 and Tobias Harris’s 21 points, no other player finished with more than eight points.

The Sixers’ three-point shooting, which has been a receipt for success all season, was also abysmal, draining just 27% of their attempts.

To be frank, Doc Rivers’ group just looks overmatched. They’re getting bodied on the boards and outhustled. If Embiid somehow gets cleared to suit up on Friday, it will give Philly a massive boost.

If not, it’s hard to see them pulling out a game unless both Maxey and Harden play at the absolute peak of their abilities and the shooters start to get hot.

There are quite a few players listed questionable for Miami here including Herro, P.J. Tucker, and Max Strus, but that was also the case in Games 1 and 2 and they still played.

I personally don’t think the Sixers stand a chance to win Game 3 unless Embiid is in the lineup. Keep an eye on his availability. If he does come back, Philly ATS would be a solid pick, especially at home. But if he continues to sit, the Heat should cover again.