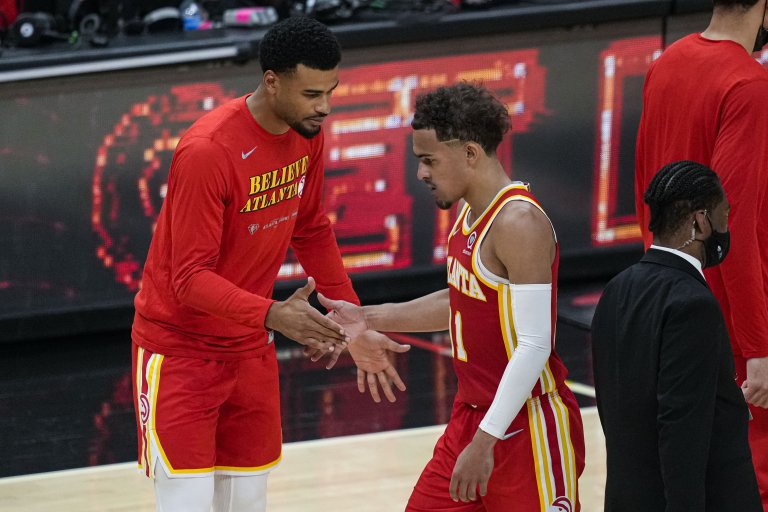 Apr 22, 2022; Atlanta, Georgia, USA; Atlanta Hawks guard Trae Young (11) reacts with guard Timothe Luwawu-Cabarrot (7) after he made the decisive basket against the Miami Heat during the second half during game three of the first round of the 2022 NBA playoffs at State Farm Arena. Mandatory Credit: Dale Zanine-USA TODAY Sports

The Heat vs Hawks Game 4 odds favor Miami by 2 points on Sunday, April 24 at 7pm ET
Kyle Lowry left Game 3 with a hamstring injury and is listed questionable for Sunday
Read below for the Heat vs Hawks odds, analysis, and betting prediction

All of a sudden the Heat vs Hawks playoff series is starting to look a whole lot more interesting. After a pair of double-digit losses in Miami, Atlanta rebounded on Friday to cut the Heat’s lead to two games to one.

The Hawks’ Game 3 victory made a major impact in the futures market – more on that later, and potentially came at a cost to Miami. Starting point guard Kyle Lowry left the contest in the third quarter and did not return, leaving his status for Game 4 on Sunday (April 24) in question.

Odds as of April 24th from FanDuel Sportsbook

Despite the uncertainty surrounding Lowry, the Heat opened up as a 2-point road favorite, in a contest that features a total of 221. Tip-off is scheduled for 7pm ET at the State Farm Arena in Atlanta, GA, with TNT providing the broadcast coverage.

Young, who turned the ball over 16 total times in Games 1 and 2, committed only three turnovers and was instrumental in leading an improbable Atlanta comeback. The Hawks were down by as many as 16 in the second half but clawed their way back once Lowry went down.

Bogdan Bogdanovic splashed 18 points for Atlanta, while four other Hawks reached double figures. After committing 37 total turnovers in back-to-back losses in Miami, Atlanta coughed the ball up only 11 times in Game 3, while forcing 15 turnovers of their own.

Tyler Herro paced the Heat offense with 24 points, while Jimmy Butler added 20 points, 10 rebounds and eight assists. Butler, who was coming off a playoff career-high 45 points in Game 2, missed a potential game-winning shot at the buzzer, after bricking another jumper immediately prior to Young’s floater.

Miami has seen its price to win the series lengthen from -1600 to -600 following the Game 3 loss, and despite being the East’s number one seed they’re not even a top-four contender in the NBA Championship odds.

The Heat have never blown a 2-0 series lead in 17 prior opportunities, while the Hawks have lost all 25 prior series when they’ve dug themselves an 0-2 deficit.

As for Lowry, he seems adamant on returning for Game 4 but the question is how effective will he be if he is active? He’s currently listed as questionable after not practicing on Saturday, but Miami has performed pretty well without him – Friday’s result notwithstanding.

Caught up with a limping Kyle Lowry on his way out of the arena. He said his left hamstring issue has him, “pissed the f— off,” and he plans round-the-clock treatment heading into Sunday’s Game 4. When I asked if he could miss time he said, “No, I’m Wolverine,” with a grin.

The Heat are 12-7 in games Lowry has missed this season, posting wins over Philadelphia, Brooklyn and Chicago in the past six weeks alone. Elsewhere for Miami, Bam Adebayo (quad), P.J. Tucker (toe), and Caleb Martin (ankle) are also listed questionable but expected to play.

Injury-wise for Atlanta, good news may be on the way. Starting center Clint Capela has been upgraded to questionable after missing the first three games with a knee injury. Reserve guard Lou Williams (back) on the other hand remains out.

Without confirmation on Lowry’s status, I’d hesitate to pull the trigger on Miami for the following reasons. The downgrade from him to Herro or Duncan Robinson at the defensive end is massive. We saw Atlanta, particularly Bogdanovic, take advantage of that on Friday and that will be a matchup the Hawks target relentlessly again if Lowry sits.

Atlanta has been phenomenal at home. They’re an NBA-best 21-3 in their own building since late January, posting six straight victories there. The Hawks’ lone two wins this season against Miami have come at the State Farm Arena, and they’ve won outright as a ‘dog in each of the past four instances where they’ve been catching points.

So let’s target the total instead. All three games in this series have fallen under the number, and the low-scoring trend should continue especially if Capela plays. The Hawks’ rim protector should be able to cut down on Miami’s points in the paint, which helps continue Atlanta’s prolific run of under cashes.

The under is 9-1 in the Hawks’ last 10 games overall, while Miami has seen four of its past five contests fall short of the total as well.