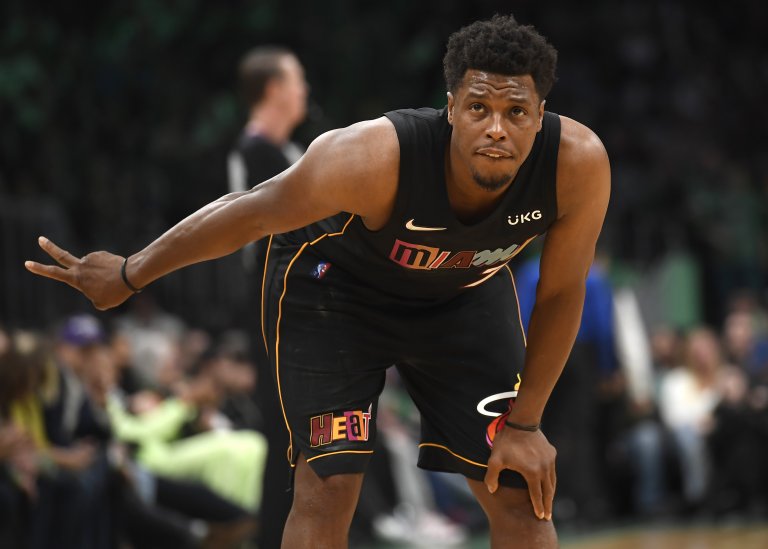 The Toronto Raptors host the Miami Heat Sunday night
Kyle Lowry returns to play his former franchise for the first time since being moved in the offseason
Find the odds, lines, preview, and betting prediction below

The Miami Heat are chasing the top seed in the East. The Toronto Raptors are trying to stay above the play-in.

Those stakes are high enough when the Heat visit the Raptors Sunday — but it also happens to mark the return of franchise icon Kyle Lowry, back for the first time since being moved to Miami in the offseason, in a mutual separation.

It should make for a great matchup and atmosphere at Scotiabank Place, where the Dinos are 4-point favorites.

Odds as of April 2 at Caesars Sportsbook

After dropping four in a row, the Heat have reeled off three straight wins, including victories over the playoff-bound Bulls and Celtics.

Toronto, meanwhile, has gone streaking down the home stretch. They’ve ripped off wins in 11 of their last 13.

Sunday’s game tips off at 7pm ET, and can be seen live on NBA TV.

After battling injuries to their roster seemingly all season, the Heat are healthy and trying to seal that top seed in the Eastern Conference.

As of Sunday night, only two games separated the top-seeded Heat from the Milwaukee Bucks, Boston Celtics and Philadelphia 76ers with just a handful of games to play. Miami has just the fifth-best odds to win the Eastern Conference.

They’ll be playing the second night of a back-to-back Sunday, after an impressive 127-109 win over the Bulls Saturday, where seven players scored in double figures..

Miami shouldn’t have trouble finding energy in the building, as the Raptors welcome home their favorite son, arguably the greatest Raptor of all time.

Lowry is coming into Toronto on a tear: he had 19 points and 10 dimes against the Bulls. In their previous game against the sizzling Celtics, he had 23 points and eight assists, including a 6-for-12 mark from downtown in a 106-98 win.

With Kyle Lowry set to make his highly anticipated return to Toronto on Sunday to face his former team, SportsCentre counts down the top 10 best moments from Lowry’s time with the Raptors. pic.twitter.com/98a3nZN90j

COVID has deprived the fan base of seeing Lowry on the Raptors’ home floor since Feb. 28, 2020.

K-Low will forever be part of the team that delivered the Raptors their first NBA title in franchise history in 2019. His name is dotted all over Raptors’ franchise records, including six all-star appearances, and the all-time leader in assists, steals, three-pointers and triple-doubles.

The Raptors might not have a true superstar in their lineup, but with a versatile and deep roster, they’re quickly becoming a team that no team in the East wants a part of in these playoffs.

Their 102-89 win in Orlando over the Magic was their fifth in a row, and all five starters and six players all together finished in double-digits.

Gary Trent Jr chipped in with 17 points, and Pascal Siakam had a 16-point, 11-rebound double-double.

Each of those four have been the team’s leading scorer during this recent run of success.

That’s a 40-piece for Pascal Siakam, who should probably make an All-NBA team pic.twitter.com/YFB5cAQXZa

Over the last 13 games, Toronto is putting up 114.2 points per game, which would rank seventh in the NBA. Defensively, they’ve surrendered just 104.7 points, which would tie Dallas for the second-best points allowed mark in the league.

The Raptors were already tied for sixth overall in this category all season.

Miami is just 4-9 straight up on the second half of a back-to-back, and just 5-8 against the spread. However, the Heat are a sparkling 31-16 in the conference, tied with the Celtics for most wins in the East.

They’re also 22-16 on the road this year, which is tied for the third-most away wins in the conference.

This will be the fourth and final matchup of the season. Toronto has won the last two, the latest a 110-106 W at home. Trent Jr led the way with 33 for the Raps. Both of the last matchups crossed the total set for this matchup.

Look for that trend to continue Sunday.