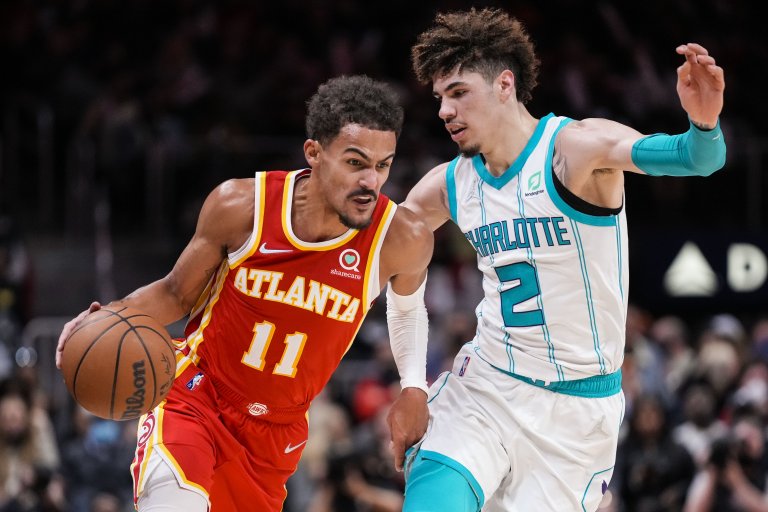 Looking at same-game parlay wagers for Hornets vs Hawks Play-In game
Stacking wagers can lead to larger payouts, if you hit each leg of your bet
See the 30-1 same-game parlay we made for the Charlotte vs Atlanta below

Winning a bet is fun, but man, there is some kind of rush seeing a stack of bets that hit.

String those wagers together, and now you’re getting bigger odds for not a lot of capital up front.

There’s no better time to try this out during Wednesday’s NBA Play-In Tournament, and we’ll get you set with one of our SGPs as the Charlotte Hornets visit the Atlanta Hawks.

The winner gets the Cleveland Cavaliers and the winner of that locks up the 8-seed in the playoffs, which comes with a date with the Miami Heat in Round 1.

All odds as of April 12th at DraftKings.

The home-side Hawks are 4.5-point favorites, in a game that features a total of 236. Even if the teams are expected to wear out the light bulbs on the State Farm Arena scoreboard, that’s still a high figure.

If you’re picking the Hornets, there is some good value on the moneyline, but that’s nowhere near the juice you can build by putting together a series of wagers, from the player-prop market.

And just a little research has unveiled the first bet we’re putting on superstar Trae Young.

Atlanta’s waterbug guard is the 4th-leading scorer in the NBA this season, putting up better than 28 points a game. He made his mark in the playoffs a year ago, when he put up more than 31.5 points (his total for this matchup) seven times in 15 games.

Trae Young is the most disrespected star in the NBA!!! Carry the hell on… pic.twitter.com/8P9aELo4HO

Charlotte has been able to somewhat contain him this season though. Young hasn’t passed this total in any of their four head-to-heads this season, scoring 30 in one matchup, but also a season-low 9 in another. So we’ll start here, taking the under.

The second leg features teammate Bogdan Bogdanovic, who has been feasting at the three-point line at the end of the season. In his final 12 games of the year, he’s hit at least three 3-pointers in 10 games.

Trae Young made the most 3PTs in a single season in franchise history.

Bogdan Bogdanović made the 11th most in franchise history, in just 63 games.

He’s putting up more than eight shots from range in that stretch, and Charlotte is letting teams shoot at a 36.2% clip.

We’ll wrap up the Atlanta section of this wager with big man Clint Capela and blocks. On the surface, it’s could be a questionable bet, as he’s had just three blocks in his final five games of the season, including three games with no swats.

While this isn’t technically a playoff game, the stakes are high, and effort is maximized. And that’s what we’re banking on. When the playoffs started last year, Capela had at least two blocks in every game in the opening series against Knicks. I think he elevates in this win-or-go-home.

For the Hornets, let’s lean on LaMelo Ball. He averaged 7.6 assists per game this year, and while he’s been very effective dishing dimes, he’s hit double-digit assists in just nine of his final 12 games on the year.

That’s enough for us to take the under for Ball’s 9.5 assist total.

Finally, Miles Bridges started gangbusters against the Hawks this year, going for 30+ points in his first two games. However, those games happened by December 5. In the latest two head-to-heads, he’s gone sub-20, and has crossed the 21.5 point total just once in his final five games.

That’s a +3000 payday. If you’re putting up a $25 bet, you’re looking at a potential payout of $775, if you hit on all five. You can find these props at DraftKings, but there are a bevy of sportsbooks you can choose from to make your wager. Good luck!