Barry Carter reviews a common spot he finds himself in where he has a strong hand that hates action.

In the self study series Barry Carter shows you how he tried to solve a poker problem then consults a coach or solver to get feedback on his method.

What I have tried to do in the self study series is pick out common spots rather than big spots, because you get more bang for your buck by mastering the spots that come up over and over again.

With that in mind, here is a very common spot I found myself in. Single raised pot from the Cutoff, 42 big blinds effective, Big Blind calls, we have 99 against two overs and some backdoor equity. 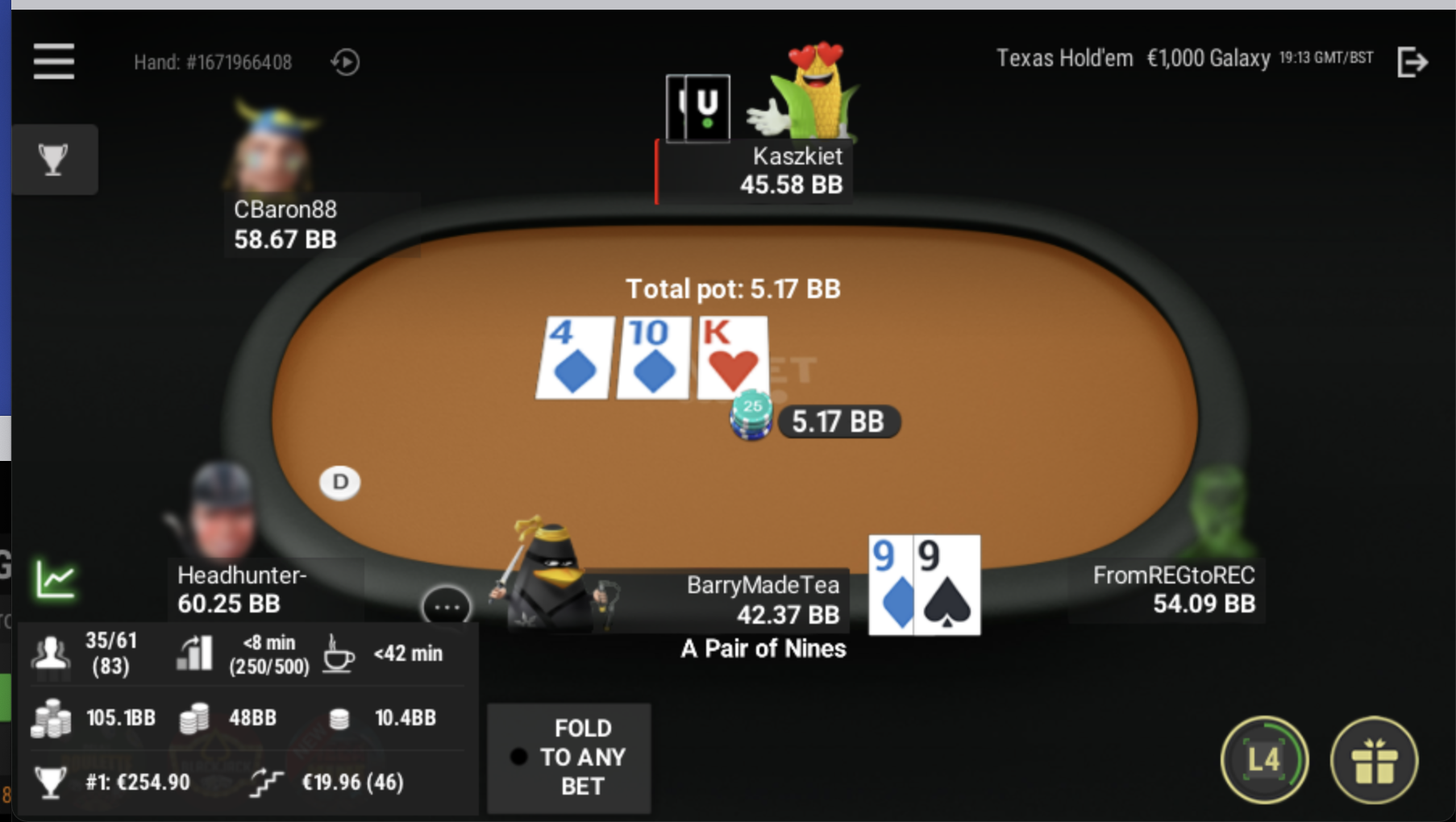 What is your line here?

I can’t actually remember how I played the hand, I either checked it down or bet small and won on the flop. The reason I screenshotted it for further review was that this is a very common spot and I felt it didn’t have a clear answer. This is still a strong hand that beats all the misses and small pairs, and has some backdoor equity (or blockers). It hates being called but also hates letting a random high card outdraw it on the turn or river.

If I had a hand like 33 on this flop I think I would turn my hand into a bluff to deny equity and also because it would have little chance to win by the river, even if it was ahead. 99 seemed right in the middle between wanting to bluff and using as a bluffcatcher.

The suits play a big part

Using a GTO approved preflop range I looked up this hand in a solver and, when checked to, this is how we should act: 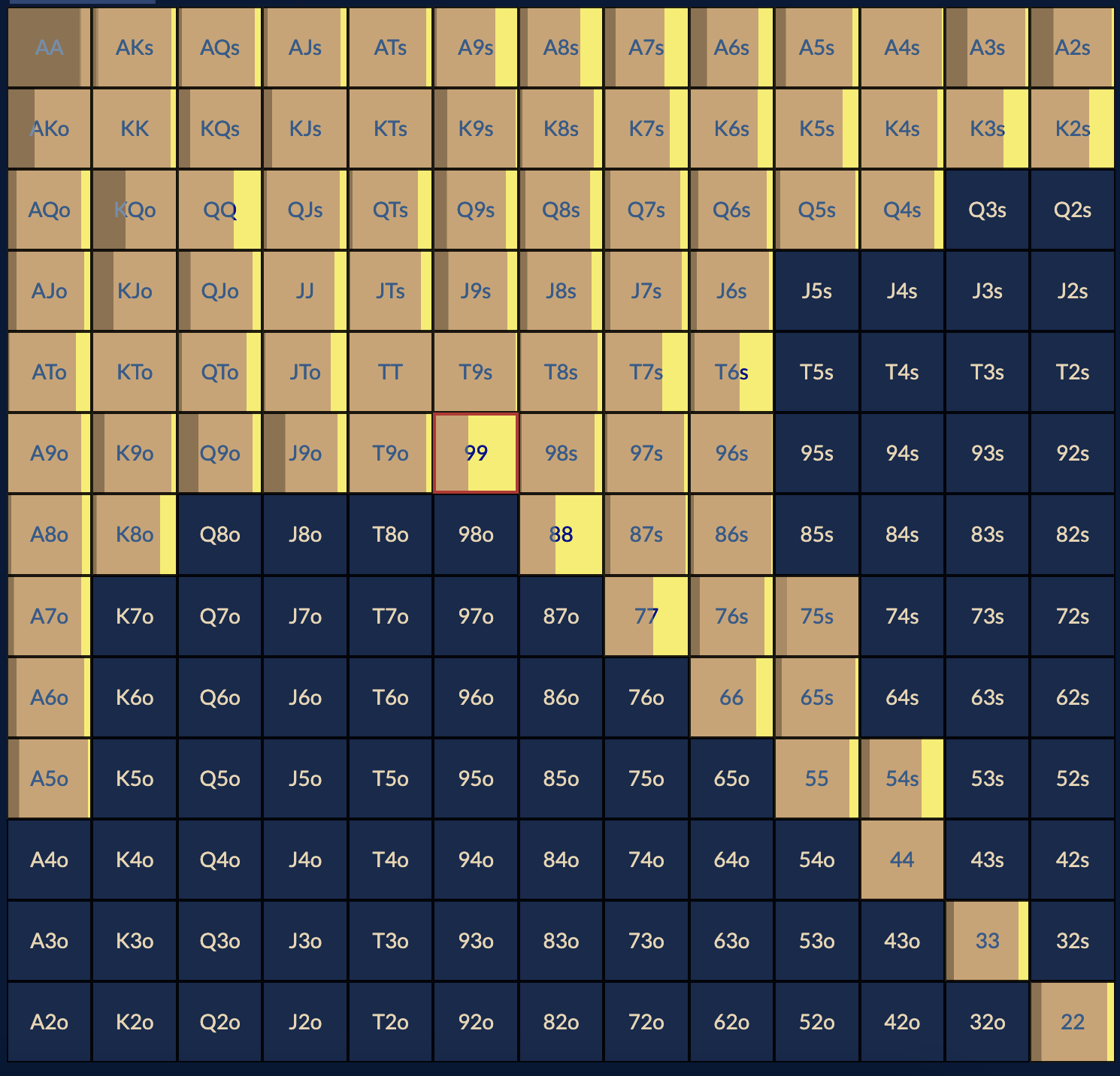 This is an instance where we have range advantage so as such we bet small with the majority of our holdings. Our big bets are value hands like AA/KQ/KJ and the big bet bluffs are big draws like Q9 and J9 of diamonds. One of the few classes of hands that took a clear mix of actions were the middle pairs 77-99, which are almost 50/50 between a small bet and a check back. This signalled to me I was on the right course of inquiry that our 99 was an outlier hand in the range.

The 50/50 split is based on the suits in play. If the 99 included a Diamond, then it was almost a pure 50/50 mix between bet and check. This makes sense, we mostly want to take the pot down with our hand not get calls, so by blocking a potential flush draw we will get more folds. We also have a blocker that makes it less likely our opponent will hit a flush, so we worry less about letting them outdraw us if we play it passive. It’s right in the middle of two competing options.

When we do not have a Diamond in our hand, then the solver suggests we bet small 30% of the time and check back 70% of the time. In this instance we ‘unblock’ our opponents calls. As such our hand works better as a check back to try and get to showdown cheaply. As I guessed the smaller pairs 22-66 almost always bet here. They are less concerned about blockers or unblockers, pretty much every card in the deck is potentially bad for them, so taking down the pot there and then is the best result.

One final note and that is that the other big hand that plays an almost 50/50 split of check or bet is QQ. It is essentially in the same predicament, it is a strong hand that is ahead of plenty but if it bets and gets called it has to worry about a King, as well as big draws. So often getting to showdown cheaply as a bluffcatcher is the best course of action. The big difference, however, is the suits of the hand determine the opposite outcome as they did for 99. If we have the Queen of Diamonds we are more likely to check, if we do not we are more likely to bet.

This is likely because with the Queen of Diamonds we will block the second nuts if the flush gets there and we block the bigger flush draw hands that will call. We also block hands like KQ. So our hand works well as a bluffcatcher in this spot compared to 99.

How do you study away from the tables? Let us know in the comments: