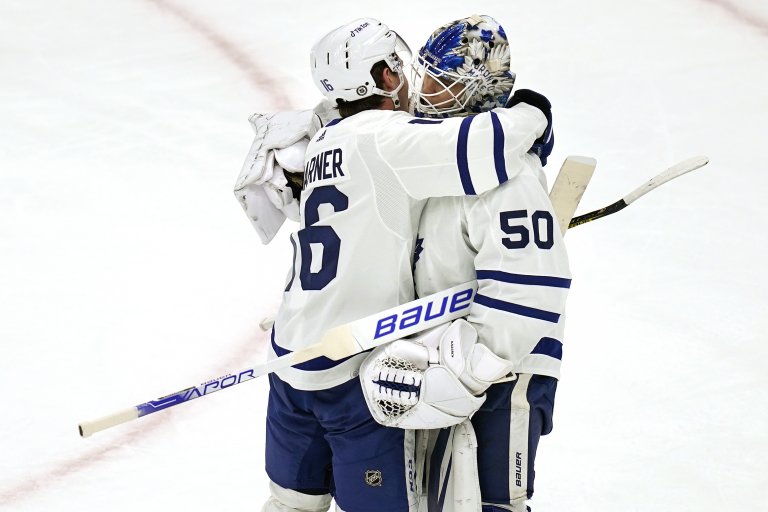 The Toronto Maple Leafs are solid -210 home favorites over the Winnipeg Jets in an NHL game slated for Thursday, March 31
Winnipeg will be minus some key players after a COVID-19 outbreak on the Jets’ roster
The Maple Leafs have won their last two games – see who we like below

The Toronto Maple Leafs are suddenly rolling and it’s who they’ve been rolling over that’s most impressive. This isn’t good news for a short-staffed Winnipeg Jets team that will be playing the second game of back-to-backs on Thursday in Toronto.

The Jets, who are in Buffalo to play the Sabres on Wednesday, are set as +175 underdogs. Winnipeg is 7-14 straight up this season as a road underdog.

Odds as of March 30th at Caesars Sportsbook

Puck drop is set for 7pm ET at the Scotiabank Center. Despite Toronto’s potent offense, the Leafs are just 2-4-1 on the total in their past seven games.

Across the leading online sportsbooks in the NHL picks, Toronto is the sixth betting choice in the Stanley Cup odds at +1200. Currently sitting three points out of a Western Conference playoff spot, the Jets are listed at +425 to make the postseason in the NHL playoff odds.

One T on one knee 💥 pic.twitter.com/Efx6rPvwks

Toronto comes home for this game off a solid 6-4 victory at Boston over the red-hot Bruins. Prior to that game, the Leafs won on home ice. They whipped the Atlantic Division-leading Florida Panthers 5-2.

Two key members of the Jets are in COVID-19 protocol and won’t be playing Thursday. Forward Kyle Connor is leading Winnipeg with 41 goals and 82 points. Defenseman Nate Schmidt has 4-27-31 totals. Forward Cole Perfetti (upper-body injury) is on IR.

Dallas keeps winning and now Kyle Connor, Nate Schmidt are out for the next three games. #NHLJets fans: pic.twitter.com/SUKL8cCbLy

It wasn’t all roses for the Leafs in Boston. During the game, Toronto lost goaltender Peter Mrazek and defensemen Justin Holl (head) and Ilya Lyubushkin (upper-body injury) during the game.

The Leafs are already without goalie Jack Campbell (ribs), and defensemen Jake Muzzin (concussion) and Rasmus Sandin (knee), who are on IR. Forward Ondrej Kase (concussion) is also out.

The Leafs are bit of an anomaly is that they are winning despite their goaltending. Toronto has surrendered four of more goals 10 times over the past 15 and 13 of the last 19 games.

Erik Kallgren stretches out and makes a right-pad save on a David Savard shorthanded rush up ice, keeping the game tied at 2 in the 3rd period pic.twitter.com/1dF7g7I0IO

Rookie Erik Kallgren came on in relief of Mrazek in Tuesday’s win over the Bruins. He’s won three of his six NHL decisions and posted a shutout in his NHL debut.

He might not be the top contender in the Vezina Trophy odds but Connor Hellebuyck was the 2019-20 Vezina Trophy winner. With the Jets fighting desperately for a playoff spot, they are riding their horse between the pipes.

Hellebuyck was in the net in Buffalo, his 13th appearance over the last 15 games. He carried a 7-4-1 record in his last 12 decisions into Wednesday’s game.

Prior to taking the ice in Buffalo on Wednesday, Winnipeg was 7-13-2 against the Eastern Conference this season. The Jets are 4-3-2 in the second half of back-to-backs this season.

Winnipeg has won two straight over Toronto and four of the last six games played between the two teams in Toronto. Also of note in the NHL betting trends is that in seven of the last eight games between the Jets and Leafs, the puck line has been covered.

Go with the hot hand. Take the Leafs and play the puck line.